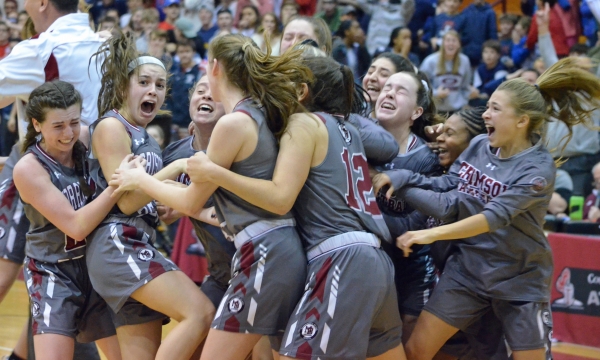 Photos by Maryann Harlow Christina DeMattheis, second from left, and her teammates revel in her buzzer-beating shot in the 2019 Morris County Girls Basketball Tournament final.
Rate this item
(11 votes)
Tweet

Multiple thoughts raced through DeMattheis' head in the second or two it took the ball to travel 10 feet. Were the tears that formed in her eyes in anticipation of a miss or from the euphoria of netting the basket that would propel Morristown-Beard to its first Morris County Tournament title in any girls sport?

Twenty minutes later, DeMattheis, understandably, still didn't know and it didn't matter. She was elated by the Crimson's 34-33 victory over top-seeded and defending champion Chatham in the 2019 MCT final on Friday, Feb. 22. And, best of all, it was her buzzer beater - off a pass from fellow senior and tournament most valuable player Bridget Monaghan - that ensured that she and her teammates would long be remembered.

"I got the ball and I didn't have time to take another second," said DeMattheis, a guard. "I didn't think it was going in. I put my hands to my face and stood there. I wasn't sure. I was shocked. I was crying. I didn't expect this."

Everyone in the gym at County College of Morris, packed nearly to capacity, likely anticipated that Monaghan would go all the way after receiving the inbounds pass under Chatham's basket from Erin Martin with six seconds remaining and Chatham up, 33-32, after Tess Ford's free throw.

Monaghan (15 points) dribbled left then cut to the right at halfcourt. She neared the 3-point arc and, smothered by defenders, whipped the ball to the left to the wide-open DeMattheis, who did not expect to be in a high-pressure, no-time-to-think situation at crunch time of a monumental game. Monaghan said she had no choice because she "saw bodies" and the scoreboard was ticking down. The decision, obviously, was the right one, setting off a wild celebration between the players and the fans who spilled out of the stands.

"Our last inbounds play is exactly why we're the team that we are," Morristown-Beard coach Mike Sturgeon said. "Bridget had instructions to go the whole way and to win the title. She saw the defense and passed to Christina who has been clutch for us quite a few times this year. It was a great move. Bridget knew what to do."

DeMattheis may have been stunned to be called upon under stressful circumstances but her teammates had the utmost faith in her.

"That little jumper... I am so proud of Christina," Crimson junior Addisyn Ibrahim said. "There was so much pressure. That's so hard to do."

"Winning this is insane," said senior Gianna Rella, who missed the semifinals because of an emergency appendectomy. "Christina was great at the end. She was composed. She's hit some clutch shots and free throws during games but nothing like this."

Morristown-Beard (23-3) trailed 18-14 at halftime. Neither team shot particularly well in the third quarter and there were multiple turnovers. The Crimson tied the score, 21-21, on Olivia Omelczuk's layup with 1:31 left. The Cougars regained the lead, 24-21, on Maddie Hartnett's 3-pointer from the right corner with 55.8 remaining. Monaghan got the rebound after an errant shot by Chatham and raced down the court to drop in a layup at 4.2 seconds.

The closing period was tight as well. Erin Martin's free throws 1:32 into the fourth period put Morristown-Beard on top, 25-24. The Cougars went in front again, holding the edge for a little more than two minutes. The score was deadlocked two more times, the last at 30-30 when Monaghan had a layup with 3:30 left. From there, Ibrahim put in a hook shot at 2:18 to give Morristown-Beard a 32-30 advantage. Following a Chatham foul shot by Shannon Donohoe at 1:56 for 32-31, there were two turnovers.

At 26.4 seconds, Morristown-Beard missed the front end of a one and one. It appeared that Tess Ford's field goal off an inbounds pass at 5.3 seconds would be the gamewinner, allowing Chatham to become a repeat champion but, right after that basket, officials put 0.7 seconds back on the clock because it was running after a timeout was called, giving the Crimson six seconds to race into the record books.

"None of this has sunk in yet," Ibrahim said. "It was so close. This shows how much we love each other. I wouldn't want to do this with anyone else."

Rella, cleared to practice on Thursday, was delighted to sub in for DeMattheis twice, seeing a minute of action in the second quarter and another in the third when DeMattheis was whistled for her third foul. She held the trophy tightly and raised it often.

DeMattheis, an accomplished equestrian who has been riding since the age of 5, indicated that the decisive shot - the first of her career - and the MCT championship were "pretty special."

Sturgeon thought of Bob Caprio, the former Morris Catholic girls assistant coach and long-time referee, who passed away three and a half weeks ago after the monumental win. The two men often talked on the phone, with Caprio offering advice.

"Bob helped me a lot," Sturgeon said. "Over the years, he'd call me after games and tell me what I did right and what I did wrong. Not many people know what he did for me. I used to be a big yeller and screamer and he advised me to calm down. I miss him. Maybe he was looking down on us."