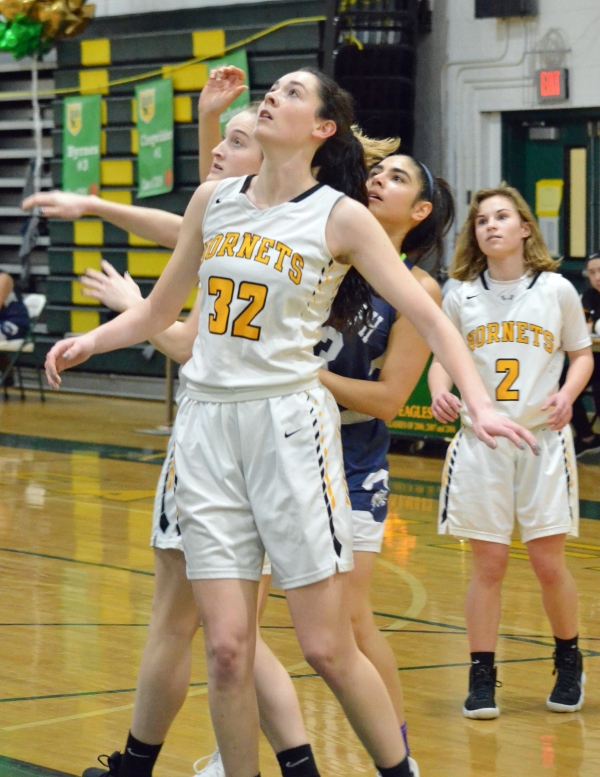 EAST HANOVER _ Hanover Park has moved on from a tight down-to-the-wire Morris County Tournament semifinal loss to Chatham. And now the Hornets are setting their sights on having another strong run in the state tournament.

Senior forward Meghan Macaluso set a new school career girls basketball rebounding record on Monday, Feb. 25 as she helped second-seeded Hanover Park to a 58-34 victory over 15th-seeded Newark Central in a North Jersey Section 2, Group II first-round game.
The 5-foot-11 Macaluso, who also scored eight points and had four steals, grabbed a game-high 15 rebounds against the Blue Devils from Essex County. That gives her 918 after coming into the game with 903 for her four years in a Hornets uniform, surpassing 2013 graduate Lauren Daugherty's 916 career rebounds.
The 917th board that broke the old mark for Macaluso came on a strong defensive rebound midway through the third quarter. The game was stopped and she was given a standing ovation by the crowd and also balloons flew into the air as she had her photo taken along with the rest of her family in the middle of the gym.
"I'm just so happy with the way everything has turned out here, I'm so proud of all my teammates and family and friends and all the fans here," said Macaluso. "But we got the win and we go on to the next round in the states. We can have quite more of an impact in the tournament the rest of the season."
Hanover Park (20-4), which has won 11 of its last 12 games, will host 10th-seeded Fort Lee, a 41-29 victor over seventh-seeded Verona, in a sectional quarterfinal on Wednesday, Feb. 27 at 7 p.m.
The Hornets, who were also aided by a team-high 13 points from senior Camryn Coffey, 11 points from junior guard Brielle Junda, six assists and seven points from senior Kelsey Stites and five blocked shots from senior Martina Wulf, have now won four in a row since the 42-38 loss to Chatham in the MCT semifinals at the County College of Morris in Randolph on Feb. 15.
Included among the wins was a 62-38 triumph over Lenape Valley on Feb. 19, a 51-31 victory over Columbia on Feb. 21 and a 67-40 win over West Essex on Feb. 23.
"It was important to get in some quality non-conference games before the state tournament," said Hanover Park coach Doug Wear. "That amount of game action could help us quite a good deal in these tough upcoming state games."
Hanover Park, which won its 22nd conference or division title (outright or shared) when it tied with Morris Catholic and Morristown-Beard for first place in the Northwest Jersey Athletic Conference-Liberty Division, each with 8-2 loop marks this season, has also won a half-dozen MCT crowns, taking six Morris titles in a row from 1983 through 1988. Hanover Park has also earned 11 state sectional championships, the last coming two years ago in 2017.
"We just want to take it one game at a time and try to move on that way," said Wear. "Everybody basically has to play every two days from here on in and we have to be ready to face the best teams in our section."
Macaluso, also a standout in soccer as a first-team all-division player in 2018 and also a very good triple, high and long jumper and hurdler and relay person in track and field, is undecided about playing basketball at the next level. She is looking at attending The College of New Jersey.
Playing the past three seasons as a full-time starter, Macaluso was a starter about half the season, some as a point guard, her freshman year during the 2015-2016 girls basketball campaign. She had 163 rebounds as a freshman, 233 as a sophomore, 257 as a junior and, so far, 265 as a senior.
"Meghan's been a very solid two-way player for us. She's very dependable on both offense and defense," Wear said. "She always seems to be in the right place at the right time."
Macaluso's putback basket with 1.1 seconds left in overtime gave Hanover Park a 48-46 win over Randolph in the MCT quarterfinals on Saturday, Feb. 9 at Morris Knolls High School in Denville, allowing the Hornets to advance to the Final Four.
Hanover Park took an early 13-0 lead with 4:43 left in the first quarter over Central and then expanded it to 34-11 at halftime and it got as big as 50-16 after three quarters. Macaluso and her fellow four starters were taken out by Wear with about half the fourth quarter still remaining to a big standing ovation.
Central's senior 5-10 forward Aliayah Smith led all scorers with 16 points. The Blue Devils outscored the Hornets, 18-8, in the fourth quarter, after the game was decided and Wear had pulled his five starters.
"If we can keep playing as a complete team unit, we can stick around in the state tournament for at least awhile," Macaluso said. "It's been a great four years here and some fun times with my teammates and coaches. I've learned a lot."
Especially when snaring a big offensive or defensive rebound that aids the Hornets.
Last modified onTuesday, 05 March 2019 00:41
More in this category: « Crimson claim MCT title on DeMattheis buzzer beater Chatham went down fighting in Group III final »