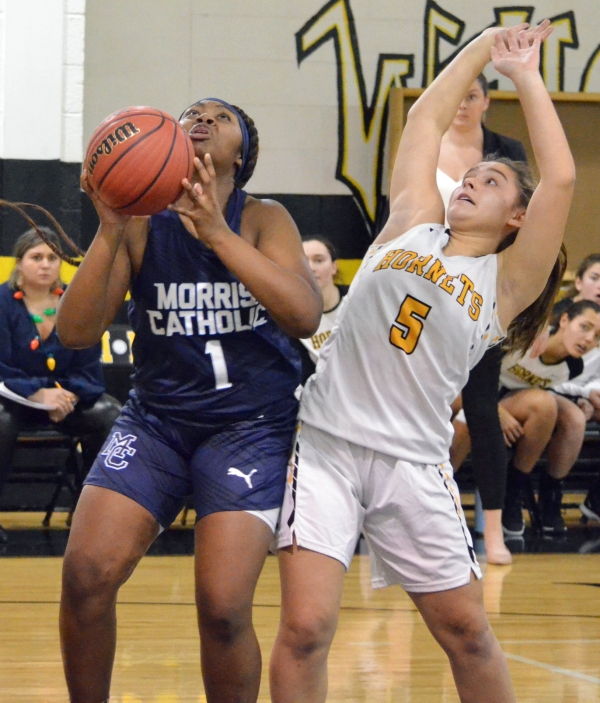 EAST HANOVER _ The number "1" on the front and back of Tyonna Bailey's basketball uniform reveals much about Morris Catholic's freshman guard.

Bailey selected it for a reason and intends to live up to the lofty digit in every way imaginable.

"I want to be first in everything," Bailey said. "That's why I chose it."

In her high school debut, Bailey, already receiving attention from Division I colleges, put herself at the top, scoring 25 points and taking down 13 rebounds when the Crusaders defeated Hanover Park 71-42 in the NJAC-Liberty Division season opener for both teams on Friday, Dec. 20.

"Tyonna is going to be dominant," said Crusaders coach Billy Lovett of Bailey, who had nine points to help Morris Catholic to a 25-8 first-quarter lead versus the Hornets. "She's a highly skilled basketball player. Her motor and her basketball IQ are exceptional. Tyonna has the desire to get better every day. She works hard. She gets shots up. Tyonna wants to be the best."

Bailey, a Newark resident, continued to power Morris Catholic into the second period against Hanover Park and accumulated 16 points by halftime. Field goals came in a variety of ways - off of putbacks, 10-to-12-foot jumpers, layups, a 3-pointer.

Was Bailey, a member of the New Jersey Sparks AAU squad, nervous?

"I was during warmups," she said. "At the jumpball, my jitterbugs left and I just played."

Still, the double-double Bailey recorded didn't leave her satisfied. Aspects of her game, she noted, need to improve.

"I did OK," she said. "There are certain things I need to work on so I can dominate. I could be better on defense and get more rebounds."

Junior forward Jadyn Watson, a transfer from Hudson Catholic, made an impact, too, in the Crusaders' first two games. Watson had 17 points and 15 rebounds in the Hanover Park game and 17 points and 14 rebounds at Paramus Catholic. Mimi Rubino, the lone returning letterwinner, had 12 points and passed for 10 assists on Friday. Rubino, a senior guard, contributed 14 points and 5 assists on Sunday.

With a trio of players capable of double-doubles each time out, Morris Catholic is a strong contender for conference, county and state titles. Nicole Strumolo, a junior, also will be a force on offense. She had 18 points in the Crusaders' first two games.

One thing that didn't sit well with Lovett was the 19 turnovers Morris Catholic had on opening night.

"It was a good first game for us but I don't think we played well," he said. "If we clean up the turnovers, we'll be better. It was a good start to the season and to conference play."

Lovett indicated that defense will be the Crusaders' forte.

"We try to win every four minutes and challenge ourselves," Lovett said. "We want defensive stops and to execute on offense. Our main goal is to establish the defensive pace. We want to make people take tough shots and for the defense to help the offense."

The Crusaders had a nine-point run in the opening quarter, which featured 3-pointers by Rubino and Strumolo, to take control and attain a 14-4 advantage 3:28 into the game. Ahead 18-8, Morris Catholic ran off seven unanswered points in the last 52.3 seconds of the first period to pull in front, 25-8. In the second quarter, the visitors had a six-point run.

Hanover Park, under the direction of first-year coach Tara Kelly, never yielded and battled for the duration. Brielle Junda, a senior guard, fueled the Hornets with a 21-point effort. The spirited and speedy Junda recorded 15 in the first half. She netted a pair of 3s in the second period and made a three-point play.

"We played against the best and we gave our all," Kelly said. "The girls work hard. As a coach, I'm extremely proud of them."

Kelly commended Francesca DiMaiolo for her nine points and Olivia Cosenzo for her 10 rebounds.

"Francesca gave 100 percent. She was great," Kelly said. "Olivia is maybe 5-foot-7 and got her rebounds against a monster team."

View the embedded image gallery online at:
https://soar-nj.com/sports/basketball/item/1623-crusaders#sigProId2778d0f463
More in this category: « Chatham went down fighting in Group III final