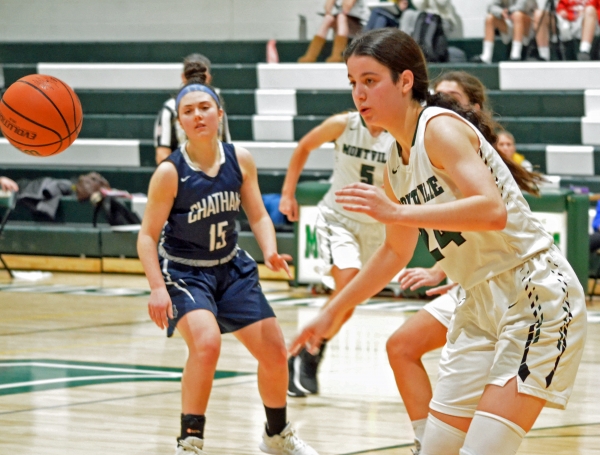 Photos by Sandy Seegers Emma Wax, right, scored the 1,000th point of her career on Dec. 30 vs. Hillside.
Rate this item
(3 votes)
Tweet

MONTVILLE _ For some players, scoring 1,000 points in high school is a burning desire.

Not for Montville senior guard Emma Wax, who never zeroed in on the milestone. Sure, it crossed her mind a little bit but she's more about winning games than attaining personal accolades.

However, on Monday, Dec. 30, Wax accumulated 24 points, including the 1,000th of her career, when Montville recorded a 63-37 victory over Hillside in the Mustangs' third game at the Paterson Kennedy Holiday Tournament. Wax not only scored, she had seven rebounds, five assists and five steals in the game which pushed Montville's record to 5-0.

"It was definitely in the back of my head as it got closer but it was never a goal," Wax said. "If it comes, it comes. We want to win games and get a few championships this season. Still, scoring 1,000 points is extra special."

Wax fired in the first of her four 3-pointers in the opening period to join the O'Reilly sisters, Kelly and Katie, and Julianne Kowalski as the girls 1,000-point scorers at Montville. Kelly O'Reilly was the last player to hit the mark, accomplishing the feat on Feb. 3, 2015. Her sister did it the year before while Kowalski became the first to reach the coveted plateau in 2007.

"It's an honor," said Wax, who has committed to Marist.

To celebrate Wax and her family went out for pizza. When she surpassed 1,000, the game was stopped and she went to the bench area to hug her teammates and coaches.

Montville coach Derek Lynn was thrilled for Wax, the third player to land a spot on the banner in the gym that touts the names of the school's top offensive standouts. More than her physical abilities, Lynn said that Wax has the demeanor required to thrive in pressure situations.

"Emma's consistency is her strength," he said. "She's never high and never low. She stays right in the middle. Emma has been great for our program."

Wax, who plays AAU for the New Jersey Freedom out of Oakland, began playing basketball at the age of 4 in a West Orange park with her father, Adam, and her grandfather, Jerry. Her dad played the sport in high school and her grandfather competed on the collegiate level so she had plenty of encouragement and support.

She prides herself on being a good playmaker, although scoring is fine with her.

"It's not just scoring," Wax said. "It's making the plays. Other teams guard me hard. I'm faceguarded hard. I just keep trying to make good passes."