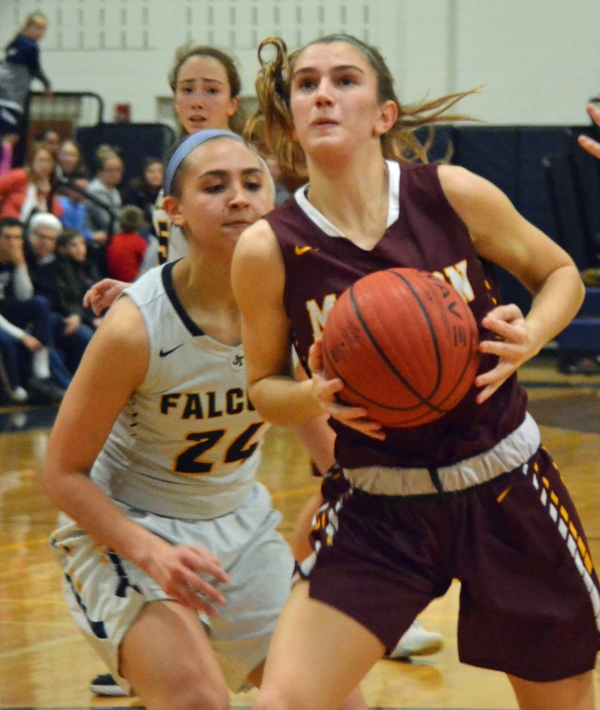 JEFFERSON _ In the frenzied fourth quarter, Tayler Soules' 3-pointer - her only field goal of the game - had a major impact.

Soules, a junior guard, has made difference off the bench for Jefferson this season and, versus Madison in a Morris County Tournament first-round game on Saturday, Feb.8, her basket from outside the arc not only gave the Falcons, missing 6-foot-3 freshman center Amanda Nwankwo, the lead but much-needed momentum en route to a 40-32 victory.

The 3-pointer 1:05 into the closing period provided fifth-seeded Jefferson, which will face No. 4 Villa Walsh in the quarterfinals on Feb. 15 at Morris Knolls, with a 25-24 edge. The Falcons (16-2) trailed by five points, 24-19, after Tess Callaghan scored 20 seconds into the fourth quarter.

"It meant a lot," said Soules of the 3-pointer. "Early in the season, my shot wasn't really on. Last year, most of my shots were going in. This was our first Morris County Tournament game so everyone went crazy when that shot went in. We got momentum then we finished the game off."

"I was a little nervous for the foul shots but I just took a deep breath and took them," said Tisma, a 90-percent free throw shooter who aspires to break the school record in that category. "We had a deep conversation at halftime. We had to get back on track. We had to make smarter passes and play better."

Putting the ball through the net just once typically isn't cause for an abundance of praise. However, Falcons coach James MacDermid felt Soules was worthy as she struggled with her shot for several games at the start of the season.

"Tayler wasn't shooting up to her standards," MacDermid said of Soules, whose nickname is T Swish. "She works so hard every day. To have the confidence to pull the trigger in that situation... We challenge our kids to take that shot."

According to Soules, who connected from 3-point range 33 times last season, her game came together on Jan. 16 when she scored eight points against Kittatinny.

"I was set after that," she said."It was in my head when I kept missing. It was more than that. I only had a shot before. I've become better at defense and passing. I'm much more well-rounded."

When her shots weren't falling, Soules had to work on three aspects: mental, form and not rushing. Her hands, she said, "were sideways and not facing the basket" when she released the ball.

Not having Nwankwo, who suffered a knee injury in loss to Newton on Thursday, caused the Falcons to be out of sorts. Madison, too, was missing a player, taking to the court without point guard Julia Olesen (back injury). Sadie Kim ran the plays in Olesen's absence and Shea Baggett played in the other guard spot.

"We got a little nervous at the end," Madison coach Lisa DiTuro said. "The momentum swung their way."

The Dodgers thrived with man-to-man defense.

"We're a defensive-minded program," DiTuro said. "We lock down on defense. Everything starts there."

Vivian Summerlin was impressive on defense, getting into the lane and frustrating the Falcons.

"We were very out of sorts without Amanda," MacDermid said. "Madison is good. They're super athletic. They applied a ton of pressure. We were missing one and a half players because Ivana was back after being sick for two days so things were very different."