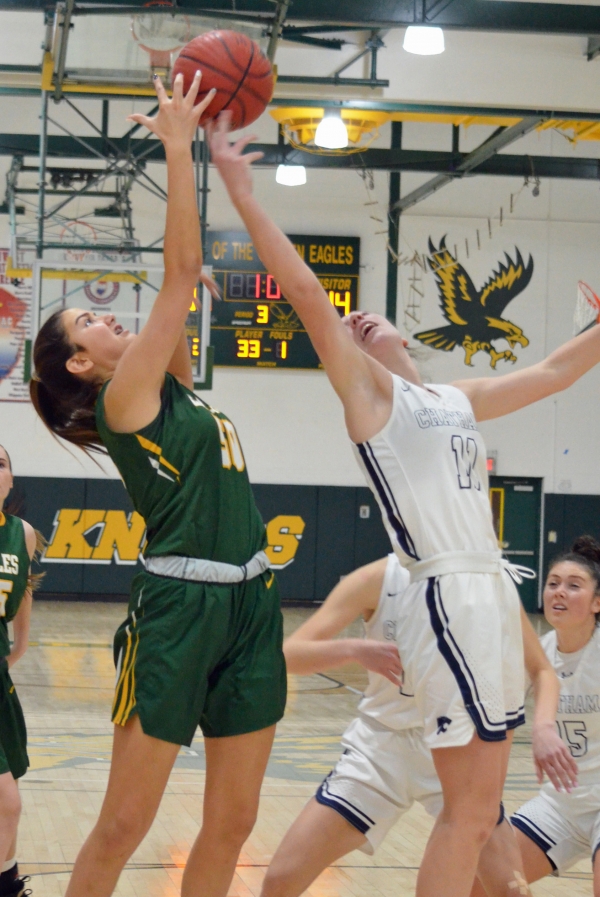 DENVILLE _ It took a little while for Chatham to shift into first gear. However, once the Cougars engine got going, they were not going to be stopped.

After falling behind early, Chatham went on a 26-2 run spanning the end of the first quarter, the entire second quarter and the start of the third period on the way to a 51-25 victory over Morris Knolls in a Morris County Tournament quarterfinal game on Saturday, Feb. 15.

Second-seeded Chatham, which has won four games in a row and 11 of its last 13, will play third-seeded Randolph in the MCT semifinals on Friday, Feb. 21 at the County College of Morris in Randolph at 6:30 p.m. The Cougars have made the MCT Final Four for the fourth year in a row and for the 14th time in coach Joe Gaba's 23-year tenure. Chatham captured the county title in 2018.

"We really just concentrated on tightening up our defense and that led to a lot of positive outcomes," said Chatham's 5-foot-7 senior guard Maddie Hartnett, who scored a game-high 12 points and also contributed five assists and three rebounds. "Everybody contributed with some big plays both offensively and defensively."

Chatham trailed 4-1 almost six minutes into the game, struggling to find its form from the field. But then the Cougars (17-4) went on that big 26-2 streak, taking a commanding 27-6 advantage with 6:32 remaining in the third quarter.

Besides Hartnett, senior forward Shannon Donohoe scored 11 points for the Cougars to go along with eight rebounds and senior Emma Frohnapfel had eight points and seven rebounds for Chatham.

Tenth-seeded Morris Knolls (10-12), which had surprised seventh-seeded and 2019 MCT champion Morristown-Beard, 56-49, in the first round, was led by senior forward Emily Mitarotonda with seven points. Mitarotonda, the Golden Eagles' leading scorer, had come into the MCT quarterfinal averaging 16.3 points per game.

"We played hard and that's all I can ask for," Morris Knolls coach Rob Moore said. "Our goal was to get here. The seniors set that goal and we accomplished it."

"I thought Carly did a real fine job defensively," said Chatham's Gaba, who earned his 452nd career victory. "Overall, it was a solid effort and now we will turn our attention to the semifinals and Randolph."

A year ago, Chatham went 23-7 and went to the MCT final, losing a 34-33 heartbreaker to Morristown-Beard. Chatham also earned a berth in the Group III state championship game last season, falling to Mainland Regional, 42-35.

Chatham, 8-3 in the Northwest Jersey Athletic Conference-American Division, defeated league rival Morris Knolls (6-10 in division, 58-35, on Thursday) and took a 46-25 verdict over the Golden Eagles on Jan. 14.
Junior Tess Ford had seven points for Chatham and Bri Menella and Kate Walsh had five points apiece for Morris Knolls in that game.

"We just want to continue playing at a high level the rest of the way," said Hartnett, who will play at the University of Scranton and major in the fall. "Our goal is to to really well the rest of the way in the counties and also to make an impact come state tournament time again."