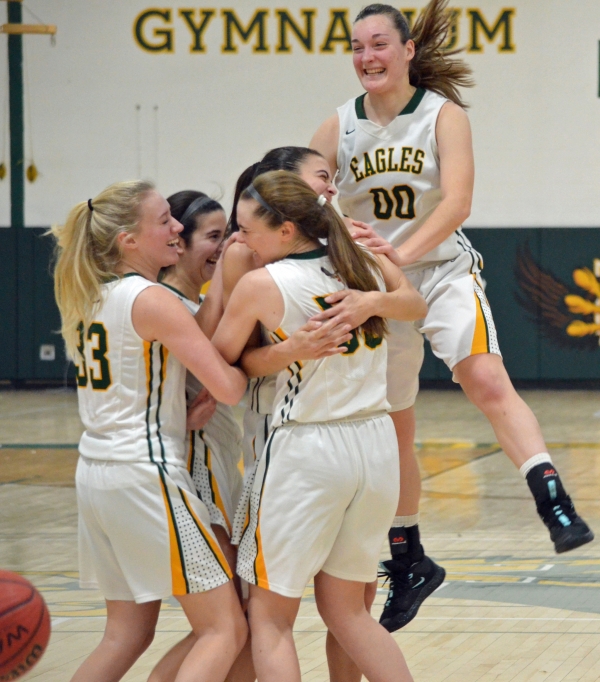 DENVILLE _ The setting was perfect for Emily Mitarotonda to pursue a significant milestone in her athletic career.

Elementary-age girls from the Rockaway and Denville recreation programs were in the gym at Morris Knolls, watching from beyond the baseline. Some played basketball at the far end, perhaps dreaming of being the center of attention on a night like this in the future. Adding to the atmosphere was a near-capacity enthusiastic crowd.

Mitarotonda, a senior forward, came through, as expected, scoring her 1,000th career point on a free throw 48 seconds into the fourth quarter becoming the third girl in school history to achieve the feat.

Morris Knolls went on to gain a 58-34 win over Lyndhurst in the non-conference game on Tuesday, Feb. 18.

"I wasn't thinking about getting a 1,000 points as a sophomore and junior," Mitarotonda said. "If I got it, I got it. I didn't think it was a big deal at first then, leading up to the season, I decided I wanted to get it."

Rob Moore, Morris Knolls' head coach, informed Mitarotonda that she'd need to score 15 points per game as a senior to earn the distinction. One hundred points away from 1,000, Mitarotonda said her "confidence level was boosted knowing how close I was."

Although Mitarotonda initially didn't perceive the milestone as a big deal, her teammate, Brielle Gavito, did. Gavito was beyond enthused by her friend's accomplishment, screaming and jumping after the foul shot that put Mitarotonda in the company of Kerri McMahon (2001) and Melissa Gialanella (1994).

"This is a really, really big deal," Gavito said. "It's been a long time since the last person did it. It's definitely important."

In the last 10 seconds of the third period, Mitarotonda had two chances to get to 1,000 but two close-range field goals missed their marks. Of course, she was double-teamed by two Lyndhurst players.

The first of her two foul shots brought her to the magic number. After the free throws, Morris Knolls had a 48-27 lead.

Mitarotonda, who finished with 23 points, four rebounds, three assists, three steals and four blocks, was swarmed by her teammates. She hugged her mother, Bridget, and handed her the ball. She ran to the opposite end of the court to embrace her father, Nick. She received flowers and balloons and then posed for photos with the team, which held a banner.

Moore noted that Mitarotonda "set her goal" and "got it done while never forgetting her teammates."

"Emily always gets them involved," he said.

Mitarotonda, headed to East Stroudsburg University where she will play lacrosse, spent a good portion of her youth playing for the Rockaway Rockets. Two of the three other seniors, Gavito and Gabby Perna, were Rockets, too, and they were glad to be on hand for her 1,000th.

"If anyone deserves it, it's Emily," Perna said. "She's always been a standout player. I'm glad we got to experience it together as seniors."

For as long as Mitarotonda can remember, she's played basketball. It began on the driveway at home with her dad and older siblings, Krista and Matt. She said that her father has been a big influence on her athletic career.

"We connect through basketball," Mitarotonda said. "At halftime, he talks to me. During the games, I don't hear others but I hear him. He tells me what I need to do."

Her mom, the activity director at Sunrise of Randolph, brought some of the residents of the facility to the game and they were clearly enjoying themselves. Most had never met Emily but they know well of her athletic endeavors.

Krista, a 2017 graduate of Morris Knolls, also was a fine athlete, earning 12 letters in volleyball, basketball and lacrosse. She's a junior at ESU and a member of the lacrosse squad.

"I hoped Emily would get it tonight," Gavito said. "We kept feeding her the ball. I love that she got it with all of the little kids here."