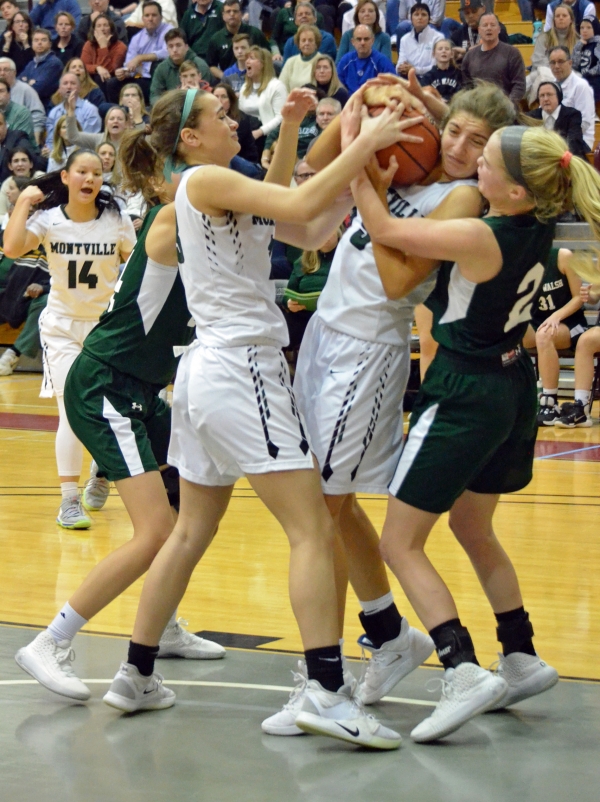 Photos by Maryann Harlow Villa Walsh gave top-seeded Montville all it could handle in a Morris County Tournament semifinal on Feb. 21, 2020.
Rate this item
(11 votes)
Tweet

When are we going to play our game?

Derek Lynn, coach of the top-seeded Mustangs, wondered just that as he watched his team trail fourth-seeded Villa Walsh for the bulk of the first half and into the third quarter in a Morris County Tournament semifinal at County College of Morris. Montville was working against two factors - the fired-up Vikings and their ultra-energized student fan section known as the Mosh Pit. And, yes, it certainly seemed like Montville's perfection was in danger.

The Mustangs, bolstered by a 12-point run that commenced with 3:03 left in the third quarter on Emma Wax's free throws and extended into the fourth period, finally pulled away, gaining a 37-25 lead on the way to a 48-34 win on Feb. 21.

Prior to that burst, Montville did plenty of sweating while contending with Villa Walsh which retained its drive and determination despite the loss of its top 3-point threat, Kate Gehringer, who exited 1:40 into the second period with a knee injury.

"Van (Johnson) always has a good game plan," said Lynn, referring to the Vikings' coach. "We weren't familiar at all with Villa Walsh. We had to get a feel for them. They fed off the crowd. They kept coming at us. Even when No. 30 (Gehringer) got hurt, they didn't stop.

"Villa Walsh was more aggressive on offense than us on defense. They had 3-point attempts and were getting to the rim with ease. We didn't match their intensity."

Montville (22-0) didn't have strong fan backing because many of the students didn't attend. They were taking part in a volleyball marathon sponsored by the Key Club. Lynn felt their presence would have made a difference. Instead, Villa Walsh, appearing in its first Final Four, had it all - no fear, a solid plan it adhered to, the VW Mosh Pit in white-out mode and the desire to play for Gehringer.

"This was our first time here and we left it on the floor," Johnson said. "There were no jitters, no nerves. Villa Nation was here and those girls were good. Our team had so much heart. I'm so proud of them. We were up against two Division I-type athletes. We tried to stop them. We believed and executed. Maybe if Kate didn't go down, we would've had a legitimate shot."

On Friday, Feb. 28, the Mustangs, seeking their first MCT girls basketball title in school history, must be focused for 32 minutes when they clash with second-seeded Chatham, which prevailed 40-28 over No. 3 Randolph in the other semifinal. Montville, the MCT runner-up in 1977, already defeated Chatham twice in league play, winning by five and six points.

"We've been starting slowly lately and that's not good," said Montville junior forward Dani Vito. "We were so nervous coming in. We need to relax and play our game. We're ready to make history."

Villa Walsh (16-7) was clearly intent on advancing and putting the first blemish on the Mustangs' record. The Vikings thrived from outside the arc in the opening period, getting 3s from Gehringer, Karin Brett and Isabella Jambrina.

Daniella Jambrina kicked off the second quarter with another 3-pointer, putting Villa Walsh up, 12-9. The Vikings maintained a five-point lead for a good portion of the period but Montville closed to one point, 20-19, at halftime.

There were two ties and five lead changes in the third quarter. The score was knotted, 25-25, then Wax, bound for Marist, netted a pair of free throws and two field goals to send Montville in front, 31-25. Bella Vito went inside for two baskets in the last 1:09 of the third period to widen the Mustangs' lead to 10. Villa Walsh was unable to recover, although it reduced its deficit to eight, 40-32, on Maggie Crimmins' 3-pointer with 3:06 remaining.

"I think we focused on what we were good at," said the Vikings' Brett, who ended with 17 points. "There was no pressure on us. We were motivated. We played with a chip on our shoulder. We went from proving it to ourselves to doing it for Kate."

Chatham coach Joe Gaba felt that if the game versus Randolph had a turning point, it was Emma Frohnapfel's 3-pointer off a pass from Shannon Donohoe 2:44 into the fourth quarter. The trey - Frohnapfel's only points - enabled Chatham to open a 26-19 advantage.

Frohnapfel, whose last name means "happy apple" in German, was overjoyed to have a significant impact at crunch time considering she missed all of last season with a torn ACL sustained during her sophomore lacrosse season.

"That 3 helped us get ahead," said Frohnapfel, a senior. "If I'm open, I want to knock one down. We get rolling with 3s. They get us excited and give us energy."

She further indicated that she was "happy to be back" and be part of the Cougars' latest MCT run. Chatham (19-4) will play in the MCT championship game for the third consecutive year. Last February, the Cougars were edged 34-33 by Morristown-Beard in the final.

Frohnapfel has honed her long-range shot after practice with Maddie Hartnett and Tess Ford. Her sophomore sister, Carly, typically serves as rebounder.

"Our composure stands out. We weren't rattled when it was a one-point game," Gaba said. "We stayed the course and made adjustments. Our shots started to fall. We didn't panic. We came out strong defensively in the second half. We got more transition going."

Now that they've advanced, the Cougars are anxious for another meeting with Montville.

"Last year was disappointing," Frohnapfel said. "We want redemption. It's a privilege to get here and we're going to leave it all on the court."

View the embedded image gallery online at:
https://soar-nj.com/sports/basketball/item/1638-mct-semis#sigProId7103332282
More in this category: « A perfect night for Mitarotonda Third title for Mustangs' banner »