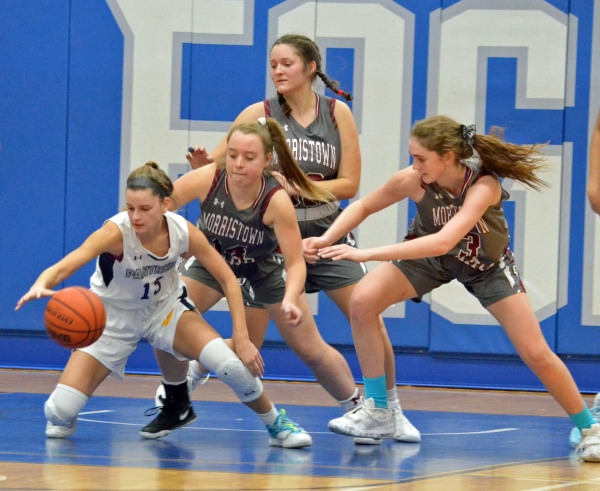 MORRISTOWN _ There's anticipation and excitement and an equal dose of dread that come into play for seniors at state tournament time.

Of course, they don't want it to end so there's typically an extra push. As Morristown-Beard's Addisyn Ibrahim said "You're out or you move on. It's for all the marbles."

Ibrahim and the fifth-seeded Crimson, bolstered by high-level energy, will continue their postseason journey after attaining a 45-31 victory over fourth-seeded St. Elizabeth in a North Jersey Non-Public B quarterfinal on Thursday, March 5.

It was the third meeting between the teams this winter and the only game that Morristown-Beard, which had a difficult beginning, prevailed in.

"It's satisfying," Crimson coach Mike Sturgeon said. "Any time you win on the road in the states is nice. You get another 32 minutes. I give credit to these players. They've been at a different level in practice. It's an energy I haven't seen all year. It's the senior leadership. They did an amazing job."

The game was at St. Elizabeth, the site of one of Morristown-Beard's worst setbacks this season. On Jan. 4, the Crimson were jolted 69-36 by the Panthers, who had three players in double figures. At that point, Morristown-Beard was without Olivia Omelczuk, who missed a month (11 games) due to mononucleosis, and Reagan Russo, a transfer from Pequannock who was sitting out the required 30 days.

With Omelczuk, the junior point guard, leading the way, the Crimson were dominant in gaining revenge. Omelczuk finished with 22 points, 13 in the opening half, when Morristown-Beard gained a 24-15 lead. She demonstrated accuracy from beyond the arc, connecting for a trio of 3-pointers before halftime. Russo, too, was a key part of the effort, adding eight points. The two, apparently, want to extend the season, not only because of their individual circumstances but because they love the three seniors - Ibrahim, Emma Kenny and Sabrina Fagan - and don't want to see their time together on the court come to a halt.

"We're winning for the seniors," said Erin Martin, a Morristown-Beard junior. "We never want to get to the last 32 (minutes)."

There's additional motivation driving this state tournament run. The Crimson (17-9) claimed their first Morris County Tournament championship in 2019 but exited in the first round after falling to Morris Knolls. That setback has been on their minds.

"We're pushing each other," Ibrahim said. "We came back stronger after that and it's made us want things more. We had our third chance at St. Elizabeth tonight. I'm 32 minutes away from not putting on a varsity jersey again. I keep thinking about it. This is my time, our time."

And that explains why Ibrahim, whom Sturgeon refers to as "Switzerland" because she's never too high or too low, was so ready and intense versus the Panthers (16-10). The veteran coach praised the 1,000-point scorer whose role in the offense changed this year. Ibrahim was asked to play away from the hoop and to handle the ball a bit more.

"Addisyn was like a person possessed," Sturgeon said. "She was exceptional from start to finish. Addisyn and this whole group lock in and they buy in. It's amazing. The seniors bring the team together. I give everyone credit for not hanging their heads. They wanted to win the counties again. That was their main goal. It got away and they kept going."

In order to rise above their disappointment in the MCT, the Crimson, according to Martin, have a motto in their heads which is "We before me."

"We say it all the time," noted Martin.

The game was the scholastic finale for Hannah Kelly and four other seniors from St. Elizabeth. Kelly, bound for Tufts, made her exit by surpassing 1,000 points. The milestone occurred in the third quarter when she fired in a free throw with 2:55 remaining.

"Getting 1,000 was good for Hannah and good for the program," Panthers coach Bruce McCloud said.

Kelly was limited to a 3-pointer in the opening half. However, she recorded six points in the third quarter to ensure she'd get to 1,000.

McCloud commended Morristown-Beard for the defensive effort that held down Kelly.

"Morristown-Beard's energy level was up," he said. "They outhustled us and the defense was good on Hannah."