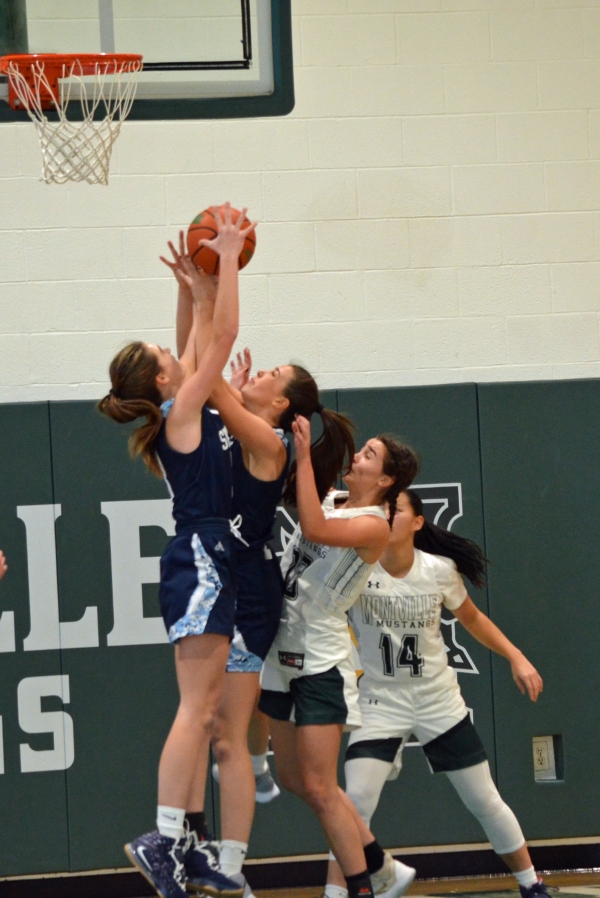 Photos by Sandy Seegers Sparta players battle to secure control of a rebound in a game against Montville on Thursday, Jan. 28, 2021.
Rate this item
(7 votes)
Tweet

Last summer, Acker was constantly on the go, practicing on Wednesdays in preparation for softball tournaments on the weekend, playing in a basketball league, working with a personal trainer and making frequent trips to the weight room.

Although Acker is best known for her prowess in the pitching circle, she's become a major force inside for the Spartans, toiling to get rebounds.

"We've got the four sophomores," Spartans coach Cathy Wille said. "We needed Alexa to come alive. She committed to the weight room. She's trying to get stronger. Alexa is going to make a big difference."

No doubt. And make an elite, well-balanced squad, which received 25 points and 11 rebounds from sophomore Brynn McCurry, even more difficult to contend with.

Acker, a first-year starter, simply decided it was time to take it up a notch. Only 16, Acker, whose third sport is volleyball, is the oldest of the starting five and wanted to take on more responsibility.

"I try to bring some leadership. Communication, too," said Acker, set to play softball at Colgate. "If I don't score, I rebound and block. I play help defense. I never stop playing sports so I'm in pretty good shape. I'm always training or doing something. There's no time off. No breaks."

Already it appears that Sparta, likewise, intends to remain relentless. It was the Spartans who handed Montville its lone loss of the 2019-20 campaign, recording a 62-47 victory in a North Jersey Section 1, Group III semifinal.

Ten months later, the two teams engaged in another tight battle. Sparta (2-0) knew it'd have to contend with senior standout Bella Vito, bound for Vermont, and the Mustangs, out for revenge. It came down to the last five minutes. After Carey Werheim scored with 5:02 remaining to bring Montville within three, 46-43, the Spartans commenced the lengthiest run of the game - nine points - to seal the win.

McCurry commenced the closing burst with a layup at 4:22. Thirty seconds later, Acker hit from close range. Over the final 1:18, Sparta netted 5-of-6 foul shots.

"We didn't have the height," Montville coach Derek Lynn said. "A team like Sparta... Tall across the board. They had the strength down low. Sparta wears you down. They're fundamentally sound and hit their free throws. We ran out of gas a little. Our shots didn't fall."

Lynn was referring to the third quarter when the Mustangs (1-1) converted only 2-of-13 field goal attempts. The Spartans, meanwhile, connected on 5-of-13 shots, with three baskets, two by Bailey Chapman, coming from outside the arc.

Vito (18 points, 11 rebounds) had only four points in the second half. In the third period, Vito, swarmed whenever she had the ball, had a free throw. Still, Montville stayed close led by Dani Vito and Grace Kowalski, who had 3s.

"In the third quarter, we went cold," Bella Vito said. "We stopped rebounding. We could have had some easy putbacks. Once we went cold, we couldn't get it back. The whole team was missing shots. We just didn't stick to boxing out. The next time we play, we need to fix a few things."

The Mustangs, without the graduated Emma Wax, started three sophomores and, at halftime, Bella Vito could sense they were a bit uneasy despite taking a one-point lead.

"They didn't say anything but you could tell how they felt," she said. "As a freshman and sophomore, I looked the same way. I was hesitant on offense and not loud and active on defense. I was scared to make a mistake. They'll be fine. We stuck with Sparta and they gained confidence even if we didn't get the win. I'm very happy with what we did today. I'm just so grateful to be playing."

Sparta's sophomores are well-seasoned, Lynn noted, having played "every second last year." He considers his team "a work in progress" but has high hopes for another successful showing after a campaign highlighted by conference and Morris County Tournament championships.

McCurry fueled the Spartans in the first quarter, scoring 11 of the team's 13 points. Bella Vito asserted herself as well, tallying nine of Montville's 14 points. Wille, though, initially was not pleased with Sparta's rebounding.

"We were getting beaten on the offensive boards," she said. "We'd get one look. They'd get three. We needed to clean that up."

Acker played a large role on both ends, asserting herself. She has clearly benefited from the hours spent lifting weights and dealing with a demanding schedule in the midst of a pandemic. She has no regrets about traveling to Pennsylvania to softball practice with The ROCK on Wednesdays then returning to take part in summer basketball league games on Thursdays. On weekends, there were four to five softball games.

"It's all worth it," Acker said. "I'm used to it. I want to help the team. I've been with these girls since third grade. We know each other really well. We have tight friendships. It's junior year so it's my time to step up. They need me."