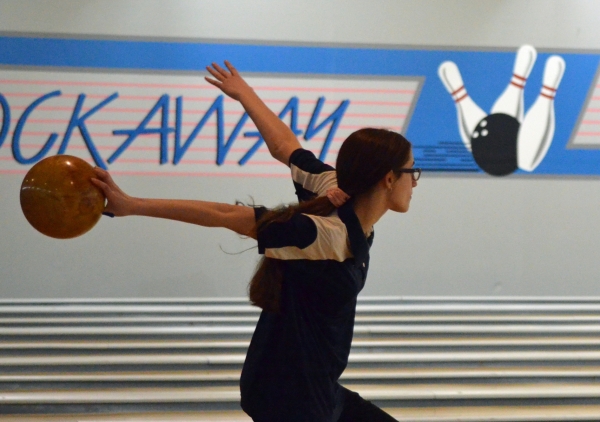 Photos by Sandy Seegers Sam Glunk, pictured, had the girls high series at the 2020 Morris County Bowling Tournament on Thursday, Jan. 23. Emma Amiaga, in the first and fourth photos in the gallery below, had the high game.
Rate this item
(10 votes)
Tweet

ROCKAWAY _ The pins teetered and seemed to fall in slow motion each time Emma Amiago recorded her last three strikes.

No doubt, the 10th frame, which closed out Amiaga's 267 game was tense. Amiaga, a senior from Morris County Tech, made it through the pressure situations, seemingly with ease, and had the highest game of all bowlers at the Morris County Bowling Tournament on Thursday, Jan. 23 at Rockaway Lanes.

Amiaga, a resident of Butler, ended with five strikes in a row - the same way she started the game that would send her to the top. In between were two spares - one of them attained despite a 3-7 split in the sixth frame.

"It was exciting," Amiaga said of the 267, her personal best. "It was pretty scary, too. The last few strikes I got weren't the best strikes but they were strikes nonetheless. I just pulled it together."

"Getting the high series felt amazing," Glunk said. "I bowled very well all three games. I was consistent."

Glunk was a bit nervous initially, likely because the event was being filmed by a local news outlet, whose videographers were stationed at the end of the lanes. She put them out of her mind, however, and got to work.

"I'm not used to being on camera," said the 15-year-old Glunk, whose opening game featured six strikes.

In the final frame of her high game, Glunk was stellar, firing three strikes.

"I had a big finish," she said. "That was nice but I could have spared better. I didn't have any strikes in the second and third games."

Still, Glunk played a large role for the Cougars, runners-up to Montville in the team competition, with her steady performance.

For Amiaga, who focuses on multimedia at Vo Tech, bowling the high game (Tyler Johnson of Morris Knolls had a 263) was a moment to treasure as she likely will not be competing next year when she goes to college. The schools she's interested in for film and media do not have bowling teams.

The new 15-pound Storm Physix ball, which she had drilled a week before at Rockaway Lanes, played a major role for Amiaga. The ball, two shades of blue and a pinkish red, rolled true. Amiaga believes the core made a difference, allowing for more hooks.

When recording the day's high game, Amiaga not only had the 3-7 split, she had a 4-6 split to contend with yet dug deep and made the spare.

"I somehow managed to keep calm," Amiaga said. "If I work myself up, I don't do very well. I was in it for the team so I had to believe in myself."

Amiaga, bowling for 13 years, certainly did. Her many years of experience enabled her to stay on an even keel.

As a youngster, trips to the bowling alley were commonplace. Amiaga tagged along with her parents, Chris and Nancy, when they competed in a Sunday co-ed league at T-Bowl in Wayne.

"Emma would crawl around the alley at first," Nancy Amiaga said. "We'd go for fun sometimes and Emma would use the ramp to get the ball going. At the age of 5, she was in a bumper bowling league."

The elder Amiaga, of course, was delighted by her daughter's showing in the county tournament.

"I'm so proud of her. I'm so happy, especially because it's her senior year," said Nancy Amiaga. "What a way to finish."

Getting the high score was a source of great satisfaction for Amiaga because it was the best among all bowlers, male and female.

"Males are praised so much," Amiaga said. "Most sports are super-male-dominated so this is great because of that. I think it's probably pretty rare."