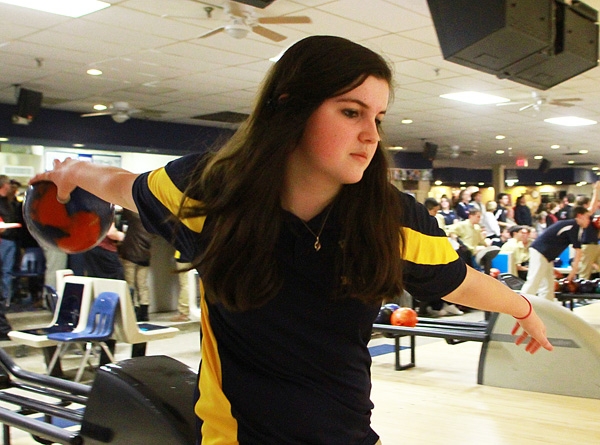 Photos by Karen Fucito Giana Loyer of Vernon gets set to release the ball.
Rate this item
(0 votes)
Tweet

SPARTA _ Sparta's Sarah Rhodes believes in the power of her lucky locket, the one that belonged to her late grandmother, Jennie.

Giana Loyer of Vernon, Rhodes' close friend, is superstitious, wearing her black headband with the bow for important bowling matches.

"I had the locket on when I finished eighth in the state last year," Rhodes said.

Not only does Loyer make sure she wears her headband, she'll never eat while she bowls.

Rhodes and Loyer have used those rituals to become two of the top female bowlers in the Northwest Jersey Athletic Conference.

In mid-December, Rhodes, a junior, distinguished herself with games of 265, 237 and 224 for a 726 series, one of the highest in the NJAC this season. Loyer, a sophomore, has been steady and boasts a 208 average.

What makes the Rhodes and Loyer so successful is their willingness to learn.

"Sarah and Giana both want to get better," said Tommy Semiz, who coaches both girls at Sparta Lanes. "They listen to us. There's no talking back, like some kids do. It's never 'I can't do this.' They say 'I'll try.'"

Semiz also noted that the girls have "very, very supportive parents, ones who will give them anything to make them better."

The 17-year-old Rhodes, a junior, comes from a bowling family, just like Loyer. Rhodes began bowling as a fifth grader. Her father, Bob, and grandmother, Jennie, bowled so it was only a matter of time before she joined in.

She has fond memories of spending time at Sparta Lanes with her family. Not long after Rhodes began bowling, her grandmother was diagnosed with lymphoma and passed away after a bout of pneumonia. Rhodes treasures the heart-shaped locket which contains a photo of her as a young child.

"My grandmother loved bowling. She thought it was a lot of fun," Rhodes said.

Her granddaughter has the same passion and has taken her skills to a high level. Rhodes, a finesse bowler, surprised herself a bit by taking eighth place in the 2011 NJSIAA Girls Individual Tournament with a two-round total of 1,240 after claiming second in the sectional. She hopes to finish even higher in the sectionals, finals and individual tournament this time around.

"As I sophomore, I wasn't really expecting to do that well," Rhodes said of the individual tournament. "Before, I just wanted to see what it was like. Now, I'm ready. I'm prepared. I feel like I have a good chance. I tell myself 'I can' and 'I deserve it.'"

Rhodes, who took part in jazz dance until last year, has watched her average dip from 204 to 197 this winter. She hasn't let it bother her, though, and plans to keep working hard at throwing her 15-pound Virtual Gravity Nano ball.

"I have to stay competitive and be focused," she said. "I try to stay calm and not let things upset me."

"Neither one goes off the deep end if things aren't going well," Semiz said. "They're level-headed and take the good with the bad. A lot of kids here have bad tempers."

Loyer, 15, started bowling at the age of 5 with bumpers in place. It wasn't long before the cushioned barriers were removed. As a 12 year old, Loyer was already in the Junior Gold Travel League competing against high school athletes.

"Giana loves it. This is what she likes to do," said Loyer's mother, Antonia. "It's fun for her."

Antonia Loyer and her husband, Dale, went bowling once in awhile prior to Giana taking it up. As she got older and more involved, they signed up for leagues. Her nonno, or grandfather, Bart Satalino, bowled, too.

"I get a lot of positive encouragement from my parents and coach," Loyer said. "They help me through it."

Loyer is the opposite of Rhodes, throwing the ball with power.

"I have a big hook and a lot of revs on the ball for a girl," Loyer said.

She is looking forward to the upcoming NJSIAA tournaments. And, from July 14 to 20, Loyer and Rhodes will be in Indianapolis at the Junior Gold Youth Tournament.

Rhodes will cheer on Loyer and Loyer will do the same for her.

"I met Giana through bowling," Rhodes said. "We definitely support each other. We're not just friends so we can say 'I beat you.' I like to see Giana do well and me, too."