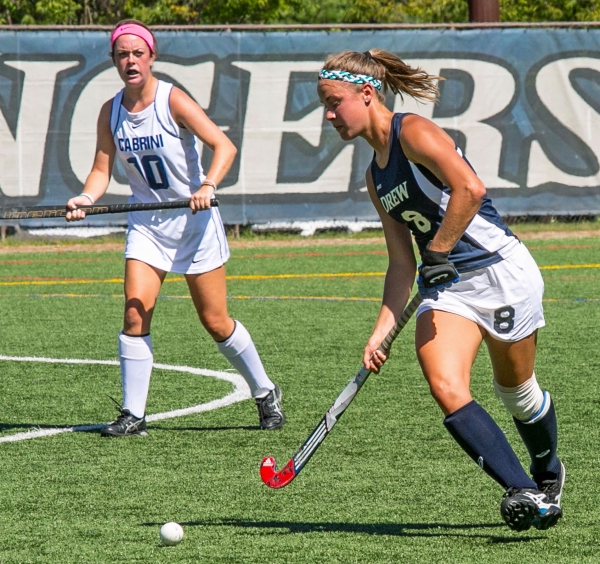 MADISON _ It took one game for Michelle Fallon to surpass her statistics from last year.

Fallon, a senior center forward, scored five goals and had four assists when Drew opened its season with a 13-2 victory over Cedar Crest on Friday, Sept. 4.

The effort was Fallon's best ever, surpassing any single-game showing, including those during her time at Pequannock High School.

"It was actually very exhilarating," Fallon said. "I did not expect that. It was a big confidence boost. We had momentum the whole game. I just capitalized when I had opportunities."

Obviously, there were plenty of chances. It seemed as if the ball was always on Fallon's stick. She knocked in the Rangers' third, fifth, 10th, 12th and 13th goals.

Fallon, named Drew's captain last spring, achieved the feat with former Pequannock coach Carole Schoen in the stands. Immediately after the game, Schoen sent Fallon an e-mail to congratulate her.

"Coach Schoen told me she was proud of me and reminded me to have fun," Fallon said.

A business major, Fallon got right back to her schoolwork after the game. She celebrated by writing an essay for her political economy class.

This is Fallon's second season at Drew. She transferred there after attending Bryant College.

"I'm very happy at Drew," she said. "The other school just wasn't the right fit."

Since beating Cedar Crest, the Rangers have lost three in a row, including a 2-1 setback to Lebanon Valley.

"The team looks good," Fallon said. "It's a new year with a new coach. We've got some new players, too. We're young but everyone is positive."

Other Morris County players on the Drew squad are junior midfielder Huma Sheikh, a graduate of Boonton High School, freshman forward/defender Kate Todero, who went to Mountain Lakes, and Morristown's Larkin Dolan, out of the Hill School.

Sheikh has a goal and an assist while Todero was credited with an assist versus Lebanon Valley.

Maura Johnston of Montville has a goal and an assist for Montclair State, which was 3-1 as of Friday, Sept. 11. Johnston, a senior forward, converted in MSU's opener against Eastern and had an assist against Cabrini. Parsippany's Tori Rossi scored a goal in the win over Cabrini.

Wallkill Valley grad Felicia Wetzel has a goal and an assist for William Paterson. The senior midfielder notched an assist against FDU-Florham and a goal in a game against Vassar.

Colette Richter, a junior and Mountain Lakes alumna, was fifth with a time of 15:19.2 at Wisconsin's Badger Opener.

View the embedded image gallery online at:
https://soar-nj.com/sports/college/item/1135-college#sigProId3656b59526
More in this category: « Princeton had historic run Montville's O'Reilly, Scranton are 27-0 »