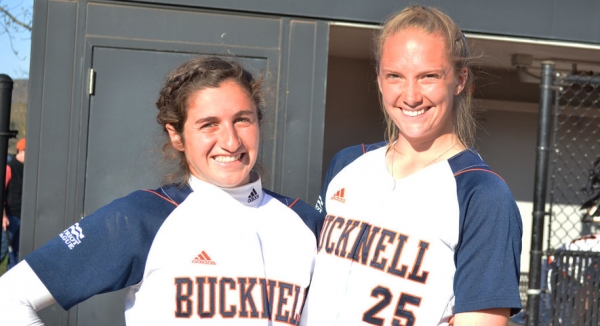 WEST POINT, N.Y. _ Shortly after taking over the softball program at Bucknell University, Bonnie Skrenta received messages and calls from other coaches about two of the incoming freshmen pitchers.

They're ferocious competitors. They've been rivals all through high school. And, they hate each other.

Skrenta's colleagues indicated that they didn't envy her and that they wouldn't want to be in her dugout even if she did have a pair of standout first-year players in Pequannock's Dana Nielsen and Chatham's Amanda Fazio.

"I heard from a lot of different people," said Skrenta, who came to Bucknell from DePauw. "They all warned me."

However, having Nielsen, who has been named Patriot League Pitcher of the Week and Rookie of the Week this season, and Fazio, also the recipient of top rookie honors, on the same team has been anything but unpleasant.

"Right away, I knew they'd complement one another," Skrenta said. "We had a barbecue during freshman orientation and one of the first things we talked about was team unity. All of our drills are teamwork drills. We worked hard on building camaraderie."

On Thursday, May 9, Nielsen, Fazio and the third-seeded Bison opened play in the Patriot League Tournament in Bethlehem, Pa. and fell to Army. Bucknell entered the tournament on a six-game winning streak and had won 11 of its last 15. After beating Colgate, 5-3, Bucknell was edged by Army, 4-3, ending its season.

Handling the bulk of the pitching duties for the 21-30 team this season? Nielsen, a right-hander, and Fazio, a lefty.

The duo got along exceptionally well so Skrenta did not have to endure and deal with any of the problems anticipated by the other coaches.

"The first week or so was awkward but we warmed up quickly," Fazio said. "It didn't take much time for us to become friendly. Dana's a great teammate. She'll start games and I'll finish or vice versa."

Nielsen agreed, too, that things were awkward at the start but that it took little time for her and Fazio to become friends.

"We knew a lot about each other from playing against each other," Nielsen said. "That made it strange but we were fine with each other the first semester. We laugh about the rivalry we had in high school."

Skrenta said that she's fortunate to have two top-notch, hard-working hurlers. They've been assets to the Bison, putting forth impressive efforts despite being new to college softball.

"Amanda and Dana both love the game," Skrenta said. "They're highly competitive and want to learn. They study batters. There are many common threads."

Both pitchers had to adjust to playing a college sport. Nielsen noted that she had to manage her time well because softball practice alone took up 20 hours per week.

"It really made me wake up," Nielsen said. "It's a lot different than high school. The fall season gave me a preview of what the spring would be like."

Nielsen, undecided on a major but leaning toward economics or political science, had to alter how and when she threw her changeup.

"Everyone in college is like a No. 3 hitter in high school," she said. "In high school, my changeup was too slow. Batters could reload and wait."

Overpowering and close to untouchable in high school, Nielsen gave up 47 extra base hits, including 17 home runs this spring - evidence of the extraordinarily high level of play.

Fazio discovered that the "game moves a lot faster."

"High school games seemed to have a certain pace," Fazio said. "There are better offensive opponents now. There are no pushover teams in college. You have to play a more structured, solid game to win consistently."

She agreed that all batters in college lineups are extremely dangerous.

"The batters are so, so disciplined," Fazio said. "If you miss, they'll hit it hard. They can really hurt you. In summer ball and high school, you can miss a pitch. It's not that way in college."

Fazio, majoring in environmental studies, recalled a game in which Bucknell held a 3-0 lead going into the seventh inning. All she had to do was get three outs. Two singles put runners on. She intended to throw a high pitch to the next batter but it missed its mark and she was tagged for a home run, tying the score. The Bison wound up losing.

"That was a learning experience," she said.

Still, the two hurlers couldn't be happier with their first season of collegiate softball.

"I want to do well, the best I can," Fazio said. "I've been fortunate to get a lot of playing time. It's working out well for me."

"I love where I chose to go to college," Nielsen said. "I'm very happy."

View the embedded image gallery online at:
https://soar-nj.com/sports/college/item/616-fazio-nielsen-outstanding-as-freshmen-for-bison#sigProId9a406e03df
More in this category: « Romano makes the switch Palmisano living her dream »