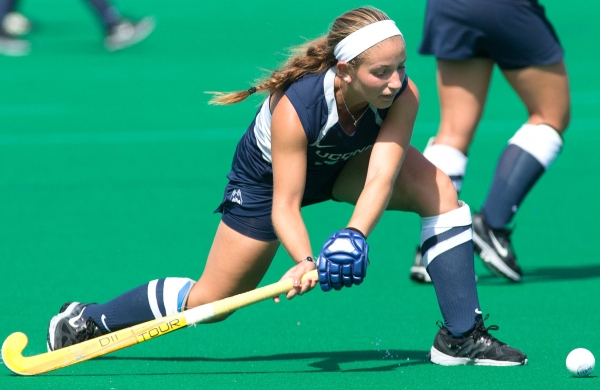 The former Chatham High School standout looked at plenty of unranked schools, knowing she had a chance to play right away. She was interested in some highly regarded ones, realizing she'd likely see limited time over her first few seasons.

However, when UConn, traditionally among the elite, sought Palmisano out, she couldn't resist.

Palmisano started two games as a freshman and all 25 as a sophomore, including the national championship game when the Huskies defeated Duke 2-0 to claim the title.

"It was incredible, something we talked about doing all season," Palmisano said. "I never thought I'd be on a team like this. Starting for the team was very cool. It still hasn't sunk in. It doesn't seem real."

Palmisano, an animal science major, played left back for the Huskies, who went 21-4 and claimed their first Division I crown under the direction of Nancy Stevens. Freshman Darby Smith, a High Point High School alumnae, saw action in seven games at forward and in the midfield.

According to Palmisano, UConn's players were motivated by an e-mail thread which originated with the captains.

"They kept saying it was our year to do it," Palmisano recalled. "We sent each other videos saying what we wanted to accomplish. We really wanted it."

After winning the Big East Championship by shutting out Temple and Old Dominion, UConn defeated Boston College, Michigan State and North Carolina before clashing with Duke.

The victory over ODU in the Big East Championship was revenge for the 5-0 defeat the Huskies suffered to the Monarchs on Oct. 25.

"That loss was a wakeup call," Palmisano said. "We had to pick up our game. We played UNC after that and lost, 2-1. Our coaches still believed in us, though, and reminded us we could win it all."

Palmisano said she got the opportunity to be among the first 11 after the defense was decimated by graduation. She and another sophomore and two freshmen comprised the "D." Sarah Mansfield was the goalie.

"The offense was experienced. The defense needed to be rebuilt," Palmisano said. "We learned how each other played. We stepped up and filled the spaces left by the seniors. We reacted well. We pulled together. There were no other options."

"It took five to six games to get the nerves out," Palmisano said. "I never thought I would start for a team like UConn. It was amazing."

After big victories, Palmisano and the Huskies held dance parties. When they went back to campus after garnering the national championship, they celebrated with all of the school's athletic teams. The members of the women's basketball team decorated the locker room.

"Winning was a big deal, not just for the school but for Nancy," Palmisano said. "It was her first national title. It was great to give that to her."

Randolph's Erica Borgo was among four Yale University field hockey players to gain All-Ivy honors in the fall of 2013.

Borgo, a senior forward, was a first team All-Ivy selection, earning the distinction for the third time.

A first team All-Ivy pick as a junior and sophomore and a second team pick as a freshman, Borgo led Yale in points and was second on the team in goals and assists (7-8-22).

That included eight points (three goals and two assists) in Ivy League games, and she earned Ivy League Co-Player of the Week honors Sept. 25. She started all 68 games of her career.

A two-time NFHCA National Academic Squad selection, Borgo is a political science major in Branford College at Yale. Prior to coming to Yale, Borgo was an all-state selection at Randolph High School.