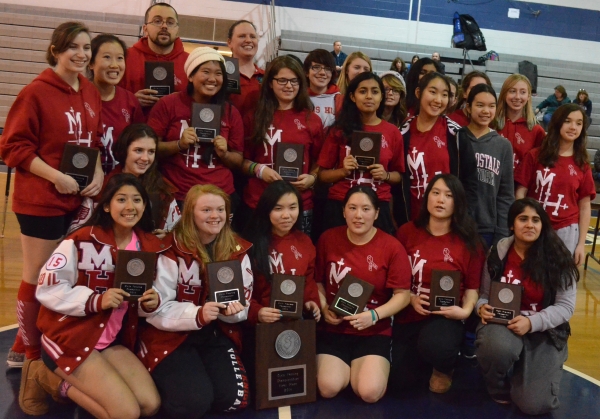 RANDOLPH _ Soft-spoken, polite and petite, Morris Hills' Stefania Siragusa does not give the impression of being a major threat.

However, put Siragusa in fencing gear and a different side of her emerges.

"Stefania comes across as sweet and innocent," said Julia Mattson, a foil fencer from Randolph. "On the strip, Stefania is vicious and aggressive."

Those traits earned Siragusa first place in foil at the Morris County Championships on Saturday, Jan. 18 at Randolph High School.

"I came here to have fun and wound up winning," Siragusa said. "That was very unexpected. Winning as a team was great. I'm really, really proud of everyone."

Siragusa, a junior, was the only "C" strip fencer to claim an individual girls championship. Typically, "A" and "B" strip fencers come out on top. Siragusa, though, had a career day, going 7-1 in pool competition in the morning and 5-0 in the afternoon. Mattson was among her victims in the afternoon, suffering a 5-3 loss.

The advice of coach Lisa Campi put Siragusa on the path to victory.

"Coach Campi told me to go out with a clean slate and to fence my hardest," said Siragusa.

When Siragusa entered Morris Hills as a freshman, she took up fencing. Her other activity was color guard but she gave that up after one year. Siragusa took sixth in her weapon at the 2013 Morris County Championships.

"Stefania had the ability to win," Scarlet Knights coach Tony Knuth said. "She's talented. We talked about moving her up to another strip but we didn't."

Siragusa thanked her teammates for their support and assistance.

"I couldn't do this without everyone telling me what to do and giving advice," she said.

Mattson said she and Siragusa met at last year's tournament and became friends. They cheer one another on at tournaments.

Kong, a senior, prevailed in all five of her sabre bouts. She attributed her title to "fencing smart."

"I feel good about winning," Kong said. "I stayed focused. I'm glad I could help the team."

On Wednesday, Kong suffered an injury in practice, getting hit in the knee with a sabre when a teammate parried and reposted into her leg.

"It bothered me a bit but it was nothing serious," she said.

Laura Ng was the third Morris Hills fencer to triumph as an individual, coming out atop the pack in epee.

Ng and her teammate, Jackie Lanigan, engaged in a fence off to determine who'd be awarded the gold medal.

The host Rams were the best foil squad. Randolph, too, fenced off, matching up with Mendham.

"We've come close," Rams coach Mark Kuschke said. "Last year, we missed by a touch so this group deserves it."

Mattson and Cara Zhao, both seniors, and Julia Nieforth, a sophomore, comprised the Randolph foil unit.

"This is a big accomplishment because we've trained so hard," Mattson said. "There were endless practices, camps and tournaments. It feels so good because fencing has a name now."

The girls were anxious to see their achievement displayed on the banners that were purchased in 2011.

"It's all pretty amazing," Nieforth said. "Julia Mattson always wanted it. I'm glad we could be a part of it."

Mattson, the captain, mentioned that fencing was new to the school, joining the slate of sports in 2009.

"We're setting the standard for years to come," Mattson said. "The bar is high."

Zhao recalled that she and Mattson were soccer players before deciding to concentrate on fencing.

View the embedded image gallery online at:
https://soar-nj.com/sports/fencing/item/776-morris-hills#sigProId6fe692bd4c
More in this category: « Mendham ninth at Santelli Santsevich continues to roll »