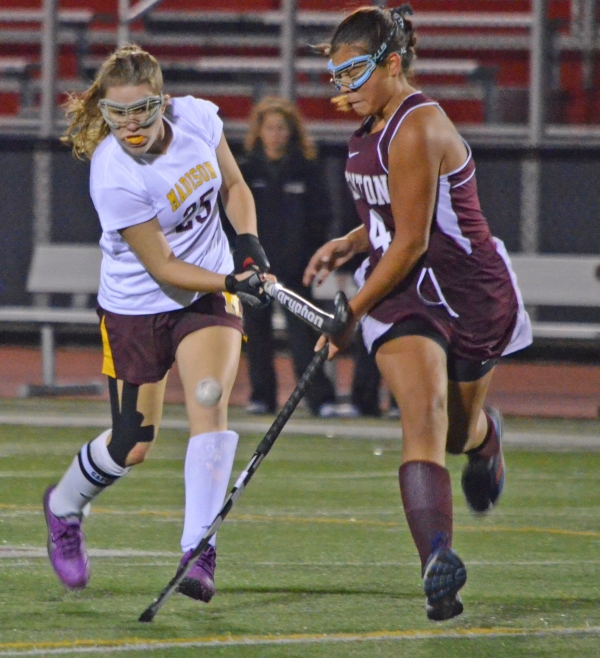 Photos by Maryann Harlow Sydney Fielding of Madison and Morgan Mendel of Newton vie for the ball in a Group I semifinal.
Rate this item
(5 votes)
Tweet

MADISON _ Last season, Madison, which claimed a trio of titles, including the Group II state championship, was a dozen seniors strong.

Seven of the seniors started, giving the Dodgers a highly talented and veteran team. Entering the 2016 campaign, Madison knew it'd be rebuilding but didn't utter the word very often or very loudly.

On Thursday, Nov. 9, the Dodgers, relying more on camaraderie than abundant skill and a multitude of club players, dispatched Newton 4-1 in a Group I semifinal at Boonton High School to earn a third consecutive trip to the state finals.

In the second game at the same site, Morristown, which enjoyed a stellar season, was trimmed 2-1 by Bridgewater-Raritan in a Group IV semifinal.

"No one expected us to get this far," said Madison senior forward Catherine Crowley, who had two goals versus the Braves. "This team is definitely different. We had a lot of talent before. I'm not saying we have none now but it is more of a family. We play together and we make it work. We're all best friends and want to do well for each other."

After falling to Morristown in the MCT semifinals, the Dodgers (16-4) decided they didn't want to be on the losing side again and zeroed in on the state tournament.

"We became really motivated," said junior right back Maddie Stein, a first-year starter for Madison. "After losing, our coaches instilled in us that it wasn't a feeling we wanted to experience again. We play for each other and use teamwork. It's really cool to do something like this with your best friends."

Since being shut out by Morristown in the MCT, Madison, which will meet Haddonfield for the Group I title in Bordentown at noon, has won six of seven games and allowed only one goal in the state tournament.

"Being in the state final again is huge," the Dodgers' Elizabeth Romano said. "No one expected this. We kept working at it. We pushed through every obstacle. We had injuries and got through them. We didn't know what would happen after the counties. Everything's going pretty well. We kept pushing."

Romano, a junior center forward, had a goal and an assist in the semifinal. She set up Crowley's first goal, getting off a pass while being marked by two players. Crowley, who refers to their goal-scoring connection as "telepathic moments," wrapped the ball around the goalie, putting it into the left side with 7:12 left before halftime.

Maddie Farrell moved Madison's lead to 2-0, converting less than two minutes later. Romano registered the third goal with an assist from Farrell 3:13 after the break. Sixty three seconds after that, freshman Chase Cmaylo picked up her first career points by scoring Madison's fourth goal after receiving a pass from Crowley.

"We may not have the most skilled players but we will work our butts off," Romano said. "We focus on the simple things. This is a family. We're lighthearted. We're not concerned about performing. We want to have fun and play our best. We don't worry about what could happen."

The Dodgers start only three seniors so the future looks bright.

"If you asked at the beginning of the season if we'd be here again, I'd say no," Madison coach Ann Marie Davies said. "We're peaking at the right time. The kids have developed a great chemistry."

Newton's goal came off the stick of Natalie Rivas with 3:32 remaining.

"We kept them scoreless until seven minutes left before halftime," Braves coach Lisa Bechtel said. "We were competitive. We had some missed scoring opportunities. We fought until the end and gave them a good game."

The Colonials (20-2) had their fine season halted by Bridgewater-Raritan but there certainly wasn't a lack of effort.

Morristown fell behind, 1-0, before Olivia Graham scored off a penalty stroke with 14:48 remaining in the second half. Graham, a sophomore, sent a hard shot into the left side of the goalcage, knotting the score.

"The stroke was very good," Colonials coach Diane DeSalvo said. "It was beautiful. It put us back in it."

Defender Kei Murphy said the stroke "lifted us up."

"I always have faith in Olivia," said Murphy, a junior back.

The Panthers received the decisive goal from Ally Mastroianni 4:30 later. Mastroianni, like Rachel White, scored off a corner.

The Colonials, conference, MCT and sectional champs, did not shed tears but smiled after the setback.

"When you put everything on the field and do all you can, there's nothing to be upset about," junior Savannah Familo said. "We've had the best record we've had in a long time. It's so nice for the seniors to finish with this."

"I give credit to Bridgewater," Murphy said. "They're a great team with a lot of skill. You can't take that from them."

DeSalvo noted the game was "back and forth."

"We had our corners. We had our other chances," she said. "At this point, it's all about execution."