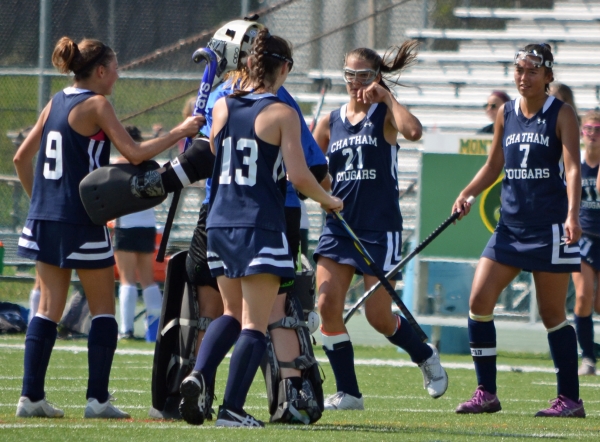 MONTVILLE _ Chatham goalie Abby Walrond was in pain for much of the first half of the Cougars' game versus Montville.

It wasn't physical, however. Walrond was watching and fretting and stressing over the absence of communication among her teammates. Although isolated while protecting the goalcage, Walrond was willing to take the blame for the eerie silence.

"The communication was dead," Walrond said. "No one was talking. I heard nothing. It was my fault and the captains' fault."

As a result, Chatham sputtered before knocking in two second-half goals - one by Ava Healy, the other by Charlotte Buckman - to shut out Montville 2-0 on Saturday, Sept. 16.

The low-key approach to the game concerned Cougars coach Kaitlin Leyden as well. Leyden couldn't going on with her squad which has not surrendered a goal since falling to Morristown 6-0 on opening day.

"In the first half, we were slow," Leyden said. "Feet got in the way. We were definitely a little off. Maybe it's because it's morning. Maybe because it's Saturday.

"The girls didn't let the first half determine the outcome. They made plays happen after halftime. They saw the spaces. I really liked that we picked it up in the second half. The communication was better. We passed well. No one gave up."

Healy, a junior forward, struck first for Chatham, sending the ball over the head of Mustangs goalie Sam Conrad 11:35 into the second half. Senior midfielder Charlotte Buckman assisted on the goal. Buckman had a score of her own with 2:50 remaining, tapping the ball in from the post. Sarah Goodheart set up Buckman's goal.

"In the first half, we were being quick and not looking up for the pass," said Lauren Mumby, whose play in the midfield buoyed the Cougars (3-1-1). "We got free hits from the side, made our cuts better and drew defenders out."

Fortunately, the defense was on task for the majority of the game. Walrond, freshman sweeper Charlotte Hamilton and Marissa Sullivan stood out on "D." Hamilton has been superb since moving up from JV one game into the season.

"Charlotte gets really low and is able to shift her stick to reverse and go strong side," Mumby said. "She follows the ball and, when she gets it, checks to see who's open for a pass."

Hamilton is delighted to be helping the varsity and considers her teammates to be "super awesome." She noted that the Cougars quickly accepted her and she wants to make them proud.

Montville (2-3) couldn't get its offense going, either, and had only six shots on goal.

"The game, in general, was frustrating," Aimee Vizzuso said. "We didn't play our game. We were nervous. Chatham is great competition and we were a little timid. We didn't control the game. We needed to be more aggressive."

Conrad (12 saves) was a bright spot in goal for Montville. Defenders Ange Abbott and Emilee Vizzuso were strong. Ally Yu, normally a midfielder, started at forward and created the majority of the Mustangs' scoring opportunities.

"Once our momentum starts going, this team will surprise teams that might underestimate us," she said. "We have to keep pushing."

Walrond also feels Chatham is highly capable and will be a force in the county and state tournaments.

"We always try to be upbeat and never lower our heads or stomp our feet," Walrond said. "We just say 'Let's kill it at practice' or 'Let's kill it at our next game.' There's never a moment where we doubt ourselves. This team is capable of anything and we want it more than anyone else."