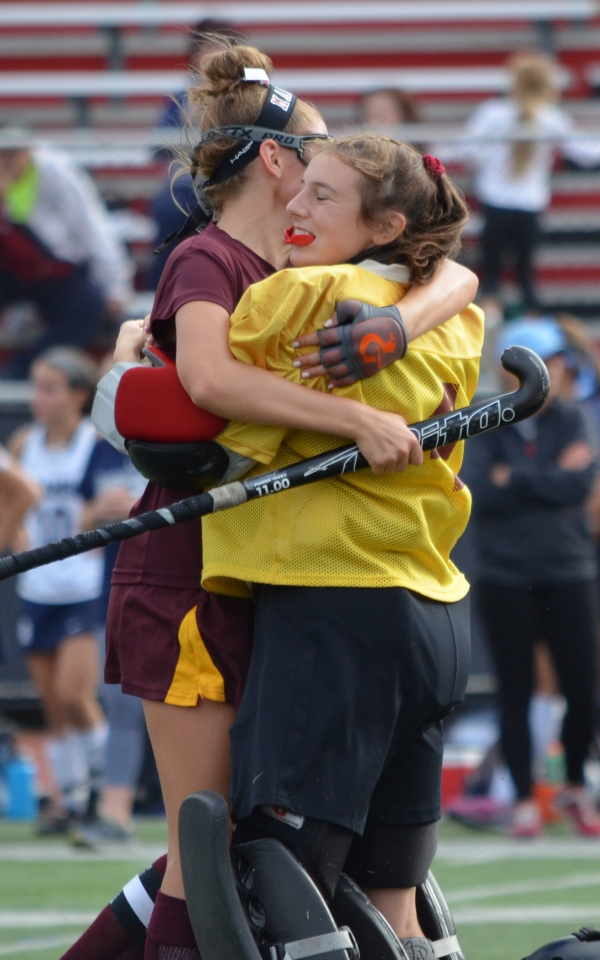 That's why Dodgers coach Ann Marie Davies was upset when she found standout senior sweeper Caroline Blount in the trainer's room two days before the the Morris County Tournament semifinal against Randolph. Blount, who sprained her left ankle while playing rugby in gym class, didn't want to tell Davies about the mishap so she simply stayed quiet and played hurt versus Montclair.

It was unknown if Blount would play in the semifinal but she was in her familiar position and her mere presence aided in Madison's 3-1 victory over second-seeded Randolph on Oct. 14 at Boonton High School.

The Dodgers will face top-seeded and defending champion Morristown, which shut out Morristown-Beard 3-0 in the other semifinal, for the title on Tuesday, Oct. 17 at 7 p.m., also at Boonton. The Colonials prevailed last season, capturing their first MCT title since 1991 by edging West Morris, 1-0. Morristown shocked Madison in the semifinals, 2-0.

"This is an awesome win," Davies said. "Everyone worked hard. Everyone contributed."

Having Blount on the field Davies said "was so comforting."

That's because the Dodgers, seeking their 22nd MCT championship, have had two players out with broken feet. Another sustained a broken wrist. To have Blount sidelined would have been a major blow.

"Caroline didn't practice Friday," Davies said. "Sprains are tough. We weren't sure if she'd play and we were worried. She was reaching when we played Montclair. That's not like her. She's great. She's a true sweeper and does very well. Caroline's patient. She makes tackles. She distributes."

After the game, which featured two goals by Kerrianne McClay and one by Elizabeth Romano, Blount was humble about her contributions.

"I was just trying to do my job," Blount said. "I didn't know how well it'd go. I'm not 100 percent. Winning feels really good. We're back after being knocked out last season. We deserve to be in the final. It's nice to be back on track."

Randolph (10-3-2) got on the scoreboard first, getting a goal from Carly Snarski 7:39 into the first half. McClay, a junior center midfielder, tied it up, 1-1, sending an angled-stick shot into the left side of the goalcage on a corner play 13:48 before halftime. Romano, who had the assist on McClay's score, converted with a shot from the top of the circle with 2:20 remaining in the first half.

"We started out flat and a little slow," Romano said. "We talked at halftime about what we needed to fix and just played through everything."

"We were not in sync at the beginning and had to come together," McClay said. "Our chemistry is great so we were able to get it back."

McClay recorded Madison's third goal following a breakaway 4:17 into the second half. McClay took the ball in from midfield and got past four defenders before getting off a lift shot from the middle of the circle.

Mackenzie Vorel was solid in goal for the Rams, making 11 saves. Mackenzie Sheehan and Sarah Leneghan were strong on defense for Randolph.

Rams coach Gina Adickes' said her players were "just gassed at the end."

"We were looking really tired," she said. "We tried to sub and get some momentum. Madison really picked it up. They had momentum and speed and were outhustling us to the ball. Mackenzie made great saves. I was impressed by our team."

Morristown, buoyed by goals by Samantha Hessels, Olivia Graham and Callie Sundin, remained undefeated after 14 games. The Colonials' objective, of course, was to make it back to the final and defend their title.

"We're super excited about the final. I have confidence in our team," Sundin said. "It all comes down to teamwork. We've been playing well. We'll be ready for the final."

"This is our senior year," said senior midfielder Devon Colquhoun said. "We're undefeated and we're looking to keep it going. Madison's a very respectable team and so are we. We've got to come into the final with all we've got."

Hessels put Morristown in front, 1-0, with a goal off a corner 9:14 into the first half. Graham set up that score. Twelve minutes before halftime, Graham had a breakaway that resulted in a goal.

Sundin, a senior left wing, knocked in the Colonials' third goal, connecting 6:27 into the second half.

Morristown had 17 corners, 10 in the first half. The Crimson, who had three shots on goal, were awarded their first corner 11:28 after the break and had three for the game.

Standouts on defense for Morristown, which returned seven starters this season, were Kei Murphy, Julia Woodworth and Colquhoun.

The shutout, of course, earned them a matchup with Madison.

"We're very happy to be back in the final," Colonials coach Diane DeSalvo said. "It's hard to get there twice (in a row) in Morris County. We've had many great games with Madison. I expect this to be another great one."