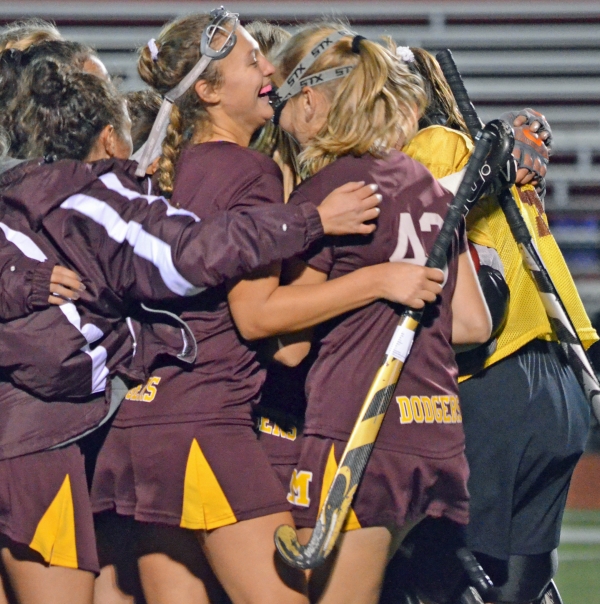 BOONTON _ It wasn't long ago that Isabella Fragomeni was intimidated by the Madison field hockey team.

Every aspect of the Dodgers' game left her in awe - their passing, high talent level, their connections, the tradition.

On Sept. 19, about two weeks into the school year, Fragomeni became one of "them" when she moved to Madison from Mountain Lakes. She had the typical concerns most transfer students have: Will I fit in? Will I get any playing time?

Both of those questions were answered quickly as Fragomeni, who had to sit out six practices before becoming eligible, made the transition with ease and earned a starting spot on the forward line.

On Tuesday, Oct. 17, Fragomeni experienced one of the greatest benefits that come with wearing a Dodgers uniform when third-seeded Madison captured its 22nd Morris County Tournament title with an 8-0 shutout of undefeated and defending champion Morristown, the top seed, at Boonton High School.

"This is a big rush," said Fragomeni, who scored the Dodgers' third goal. "This is such an accomplishment. I'm very happy that I got to share it with everyone. It's been great. I like my new teammates. I was welcomed with open arms. The coaching staff mae everything go smoothly. It's a great field hockey family. School has been fun for me, too."

Fragomeni, of course, still has strong ties to Mountain Lakes. She started for two seasons for the Lakers and had 12 goals and five assists as a sophomore. The goal she scored versus the Colonials was her ninth this fall. Fragomeni has had a goal or an assist in all eight games she has played for Madison, which received a hat trick and two assists from Kerrianne McClay in the MCT final.

"Isabella is the puzzle piece we've been missing," McClay said. "She's got a lot of energy. She works hard. Isabella has great skills and a good attitude. She fit right in. Not many would be able to fit in and bond like she did."

"She's still developing," Davies said. "Isabella is a vital part of our line."

Madison (15-2) was out for revenge after being blanked 2-0 by Morristown in the 2016 MCT semifinals. Davies made it clear to her team that she didn't enjoy the view from the stands.

That may have provided motivation for the dominant showing by the Dodgers, winners of six of the last seven MCT crowns and 10 of the last 12. Davies felt Madison, which knocked in its initial four goals in a span of 6:05 in the first half, played its best game of the season.

Elizabeth Romano, the offensive MVP, struck first, putting in two goals. Romano gave the Dodgers a 1-0 edge when she converted 5:05 into the first half. Her second came off a corner and was assisted by Maddie Farrell. Then it was Fragomeni's turn. She entered the circle on the left side, received a pass from McClay and directed the ball into the left corner of the goalcage.

McClay boosted Madison's lead to 4-0 by scoring off a breakaway that began at the Morristown 40. She dodged several players before sweeping the ball into the right side.

"We came out here and put it all on the field," McClay said. "We've been waiting for this for months. Everyone played their part. We used all of our energy. I don't think we'll ever forget this. It was true Madison field hockey."

After halftime, McClay connected before Chase Cmaylo, a sophomore forward, scored to push the Dodgers' advantage to 6-0. Cmaylo tipped the ball in after Romano took a shot and McClay picked up the rebound.

Cmaylo considered the victory "super exciting." She wasn't on varsity last year but was brought up for the MCT and saw some minutes in the 2016 semifinals.

McClay and Maddie Farrell closed out the scoring with 16:43 and 7:37 remaining, respectively.

The Colonials (14-1) broke through for three shots on goal. Madison's defense, anchored by Caroline Blount, Margaret Sheeleigh and Sage Geyer, repeatedly denied Morristown, whose attack was paced by Olivia Graham.