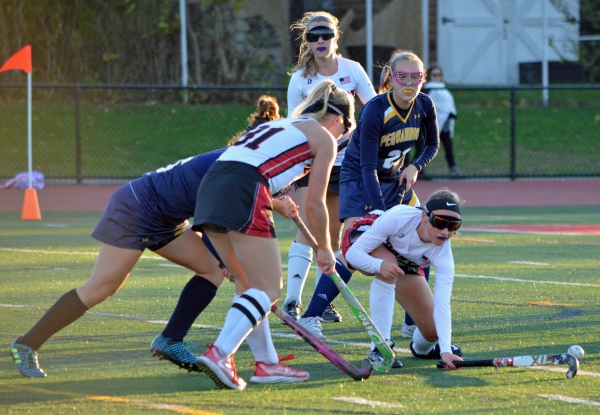 Photos by Sandy Seegers Boonton moved into the sectional semifinals with a 1-0 win over rival Pequannock on Monday, Oct. 30.
Rate this item
(8 votes)
Tweet

BOONTON _ Any team but Pequannock...

That was the thought after fourth-seeded Boonton looked at the North Jersey Section 1, Group I bracket.

The Bombers' dread was justified, stemming from past games against the Golden Panthers. It was an uncomfortable feeling to have fifth-seeded Pequannock, a fierce rival, staring down at them.

Boonton, which had tied and edged the Golden Panthers earlier this season, emerged with another win on Monday, Oct. 30, nipping the Bombers, 1-0, on Nicole Krozser's second-half goal.

The Bombers advance to the sectional semifinals and will travel to top-seeded Ramsey on Wednesday, Nov. 1 for a 4 p.m. matchup.

"Pequannock is a rival so we knew it'd be competitive," said Kroszer, the junior midfielder who converted off a corner with 13:59 remaining. "They came in hard. We were extra hyped during school. We knew they'd want to win. We had to want it more."

Senior center midfielder Makenna Sweeney kept hoping the game wouldn't go into overtime. Five of Boonton's last nine games versus Pequannock have been OT affairs. The two teams are very evenly matched as evidenced by the 3-3-3 record dating back to fall of 2014.

"I'm so glad we didn't have to go into overtime," Sweeney said. "Pequannock's a good team. This is very, very exciting. For me, it's my senior year so it's great to win today. And, I truly believe we can win the section."

Cindy Tserkis-Schlitt, the Bombers' coach, was thrilled that Kroszer came through, noting that "we can rely on her to get intense when we need it."

Krozser used a reverse sweep to knock the ball in off a corner and was assisted by Angela Viruet. Krozser has scored all four of Boonton's goals against Pequannock this season.

"Angela made a perfect pass," Krozser said. "It was really nice."

That goal provided relief yet the Bombers (14-5-1) didn't become overconfident, realizing that the Golden Panthers would be intent on driving into their end.

"This is always a tough game," Tserkis-Schlitt said. "My girls were a little overamped today. We began to break down a bit. They're excited and want to win. That's half the battle. They're not ready for their season to be over yet."

"I think just about every transitional play went off of Kristen's stick," noted Tserkis-Schlitt.

Pequannock, of course, was sad to see its state run and season come to a close.

"We expected a game like this and our girls played their hearts out," Golden Panthers coach Diane Bolchune said. "It was a great game. We just couldn't put the ball in. Sometimes, you connect. Sometimes, you don't."