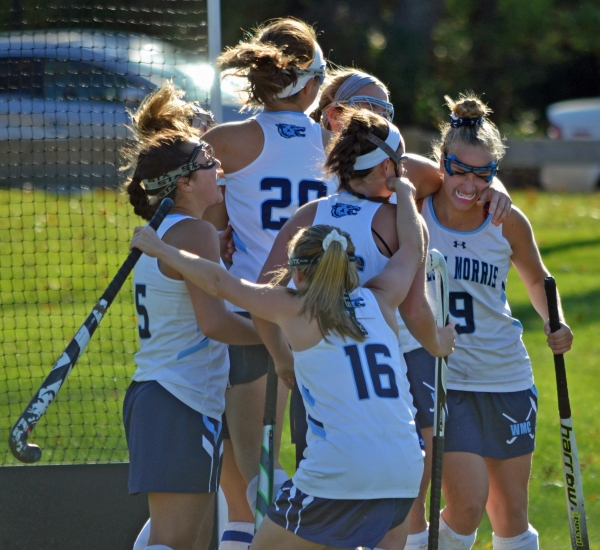 The opposing team's jerseys were navy blue and bore white block letters that read "Chatham" but no way could it be the team the Wolfpack clashed with a week earlier on the same field. The Cougars squad West Morris faced on Tuesday, Oct. 31 was markedly different than the one they blanked, 5-0. Chatham was aggressive, driven and clearly seeking an upset.

It was no coincidence that is was Halloween as the Cougars put several scares into the Wolfpack, scoring first and coming dangerously close to recording the winning goal in overtime.

Second-seeded West Morris, however, came out on top, 2-1, when Faith Spaziano knocked in the decisive score 2:46 into OT, ending a game that was highly competitive.

"They put more pressure on us than last time," said the Wolfpack's Maddie Ligos, a sophomore defender. "We had to make adjustments. Chatham brought its 'A' game. They were loud and much more confident."

That's exactly what West Morris coach Courtney Barnett thought, too. These were not the Cougars they played in a non-conference game.

"Last week's game wasn't conference, county or state and that made us play looser," Barnett said. "Chatham had a lot more urgency. We played the first half tense. We were nervous. We were a little too reactive."

Chatham got on the scoreboard first, taking a 1-0 lead on Lauren Mumby's goal 9:54 before halftime. The score by the junior forward jolted the Wolfpack. It took more than 30 minutes for the Wolfpack to come up with the equalizer. Sarah Bietka, assisted by Spaziano, knotted the score, 1-1, with 9:39 remaining in regulation.

West Morris (15-5-1) did not relish going into OT. A little less than two minutes into the extra period, the Cougars' Noelle Bessette got off a shot but it went wide left - by a few inches. Ligos, on the sideline for the 7 on 7s, actually thought that the ball went in.

"I thought that was it. My heart dropped," Ligos said. "It was the best feeling when I realized there was no goal."

West Morris, which will face top-seeded Warren Hills for the sectional title on Thursday, Nov. 2, was well aware how fortunate it was and took the ball the other way. Spaziano's gamewinner was scored off a corner. Bietka, a sophomore, assisted. Spaziano cut in front of the goalie near the stroke line and exchanged a few passes with Bietka before converting.

"This is so exciting," said Spaziano, a senior center forward. "This was definitely a big game and we wanted to move on, especially the seniors. We all stepped up. They came out more on fire today and we had to pick it up. It was pretty scary. Chatham definitely did a good job."

Barnett felt that Spaziano would come through with a score, just like she did 20 other times this season.

"Faith does a lot for us," said Barnett, who will give birth to twin boys next week. "She's marked more and is often double teamed. She dishes as well as shoots. Faith isn't the most vocal player but her game speaks volumes. We have many sophomores and she's helped raise their level of play."

Kaitlin Leyden praised the Cougars' effort and noted that "the game could have gone either way." Goalie Abby Walrond put in a top-notch showing, making 11 saves.

"It was a good game. West Morris just got lucky," Leyden said. "The ball hit by Noelle was an inch off.

"We had a good season. Our seniors had so much heart and led us on and off the field. Their voices... Their leadership. They got the team going. They knew what to do."