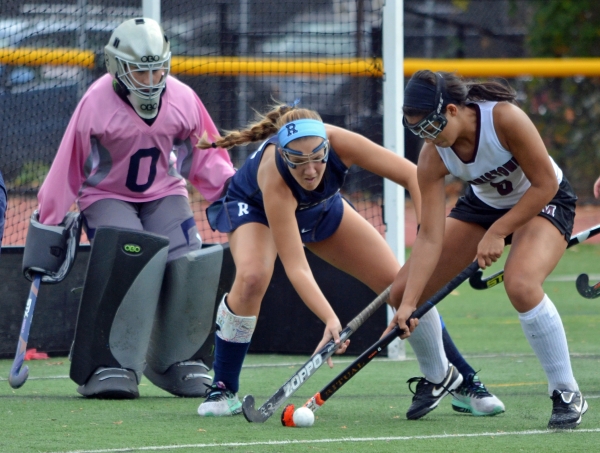 MORRISTOWN _ Losing an important game by a wide margin is one thing. Having a standout player hurt in that same game is a dual setback.

Morristown experienced the latter when it was blanked by Madison in the Morris County Tournament final and Devon Colquhoun sustained a deep gash on her left hand, just under her thumb, with 11:41 remaining in the opening half and left the game.

The eight-goal defeat and Colquhoun's injury, which caused her to be sidelined for two weeks, deeply affected the Colonials, who admitted to spending some time moping. The funk got worse when Morristown lost two of its next three games.

On Friday, Nov. 3, Morristown, buoyed by strong offensive performances by Callie Sundin and Olivia Graham, put all of the misery behind it when it repeated as North Jersey Section 1, Group IV champion with a 4-2 triumph over Randolph.

"We had to rebuild after the loss to Madison," senior left back Kei Murphy said. "It showed us we're not invincible. We knew what we had to do to get back to this place. We had to give 110, even 120 percent. Our morale was low. We were frustrated with ourselves and with Devon getting hurt. Losing her took a big chunk out of our team. Devon brings positive energy every day."

Colquhoun, a senior midfielder, was out on the field and shared in the victory with her teammates. She returned to action two days earlier when Morristown battled Phillipsburg in a sectional semifinal. Having Colquhoun back after missing three games has the Colonials (19-3) fired up.

"This twopeat is great," said Sundin, who scored Morristown's first two goals. "I'm thrilled that we get to hold on to the trophy. We weren't happy with our play in the MCT final. We tried to patch up our errors. We started out flat and Madison wanted it more. We wanted to forget all that happened in the counties. That's in the past."

"It took us awhile to regroup," Colonials coach Diane DeSalvo noted. "Not having Devon was tough. We got back on our feet."

Morristown, which will face Bridgewater-Raritan in a Group IV semifinal on Tuesday, Nov. 7 at Boonton High School, received goals from Sundin in a span of 3:39 in the first half. She scored 13:19 into the game off a corner with assists from Graham and Savannah Familo. The ball was sitting at the left post after coming off the goalie's pads. Sundin came in from the left and knocked it in. For the second one, Sundin pulled left, the goalie dove to her right and Sundin lifted the ball over her.

Graham and Colquhoun teamed up for the third goal with 3:50 left before halftime, giving the Colonials a seemingly comfortable 3-0 lead.

The Rams survived 15 penalty corners in the second half and applied more and more pressure as the game progressed. Randolph took all four of its shots on goal in the second half with less than 10 minutes remaining and converted on two. Olivia Meyers scored both, connecting with 9:14 and 3:29 left, and, suddenly, Morristown was feeling very uneasy. In the timeout that ensued the second goal, DeSalvo told her squad to relax.

"Four shots and two go in? That's a pretty high percentage and it was right in front of me," DeSalvo said. "It wasn't OK. It's never OK. I told the girls to forget about it during the timeout. I told them to let the mental mistakes go and to keep the ball at the other end. It's much safer there."

Colquhoun had an assist versus the Rams and turned in her usual reliable effort on defense. Murphy, said DeSalvo, has picked up her already high-level game in the last week.

"This is a good way to end our senior year and we're not done," said Familo, a midfielder and one of six 12th graders starting for Morristown. "We had a close game with Randolph last time and we knew they'd be coming for us. I'm glad we showed what we can do."

"We played our hearts out," she said. "We wanted it. We knew we could come out on top. It's nice to win again."