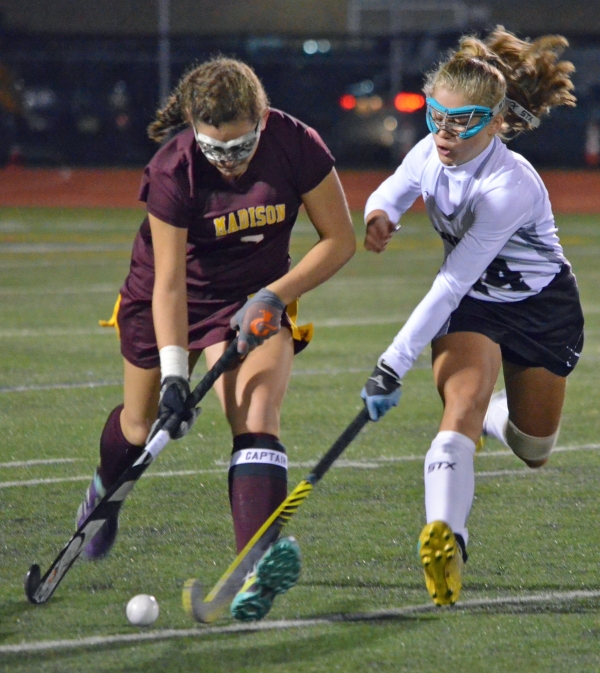 BOONTON _ Madison's Maddie Farrell hasn't chosen her college yet but she has made a critical decision regarding her short-term future and it was a difficult one.

Farrell won't play field hockey after high school, opting to focus on her studies. That's why every game is so important to the senior back. Each time Farrell has taken the field since the Dodgers began their bid for sectional and group titles 10 days ago, she knows it could be her last game. Prior to Madison's Group I semifinal versus Wallkill Valley on Wednesday, Nov. 8, Farrell experienced her usual uneasiness.

A little before halftime, Farrell and the rest of the Dodgers' seniors were confident their season was going to be extended as Madison built a 5-0 lead on the way to a 9-0 shutout of the Rangers at Boonton High School.

The victory, highlighted by Kerrianne McClay's four goals and two scores apiece by Isabella Fragomeni and Elizabeth Romano, earned Madison a trip to Group I final, which will be held at Bordentown High School on Saturday, Nov. 11 at 2 p.m. The Dodgers, appearing in the title game for the fourth consecutive time, will clash with Haddonfield.

"When we were doing drills and warming up, I thought about this possibly being my last game," Farrell said. "I stepped on the field and got butterflies. But, as soon as the whistle blew, we knew what we had to do. We wanted it so much. We didn't doubt ourselves."

Serving as motivation for Farrell and the rest of the seniors were the words spoken by their coach, Ann Marie Davies, before the contest began.

"Our coach pulls the seniors aside and tells us 'I'm not ready to let go of you yet,'" Farrell said.

The plea once again served as incentive for the Dodgers, who had an aggressive mindset on attack and an unyielding one when it came to defense. The Dodgers gained a 3-0 lead in just 10:33 on a pair of goals by McClay and one by Fragomeni, the standout transfer from Mountain Lakes. The UConn-bound Romano assisted on every goal, four of which came off corners, in the opening half. Romano finished with five assists.

"It's really amazing, especially because it's my last year," Farrell said. "I'm so excited. We've got a lot of chemistry and talent. We knew what we had to do and were so together."

McClay, a junior forward, opened the scoring, taking a pass from Romano and converting 3:18 into the first half. Romano was on the assist side of two more of McClay's goals. Fragomeni made it a two-goal lead 4:40 later. McClay then knocked in two more goals. With 12:26 remaining before halftime, Fragomeni notched the fifth goal.

"We just played the way we're capable of playing," Davies said. "We moved the ball well. We got in, got shots and got corners. Everyone did what they had to do."

The attack remained explosive in the second half. Madison (22-2) received scores from Romano (twice), Farrell and McClay.

Goalie Nicole Ducey only had to make three saves for the Dodgers. She had a bird's-eye view of the field and watched as her teammates worked the ball upfield.

"There was definitely a lot of passing and open space to run into," Ducey said. "The speed of the ball was really good."

Ducey, of course, is very much looking forward to the rematch with Haddonfield, which edged Madison, 2-1, in the 2016 Group I final. The Dodgers last brought home a group trophy in 2015 after blanking Wall. Madison claimed three other group championships (2003, 2006, 2009).

"It's so important for the seniors. We want to go out and get it," Ducey said. "We've put in a lot of work. I'm super excited. We're ready to go."

Madison Bray's goal off a corner with two minutes left snapped a 1-1 deadlock and lifted Bridgewater-Raritan over Morristown in a Group IV semifinal on Thursday, Nov. 8 at Boonton High School.

Bridgewater-Raritan moves into the Group IV final, where it will meet Eastern.