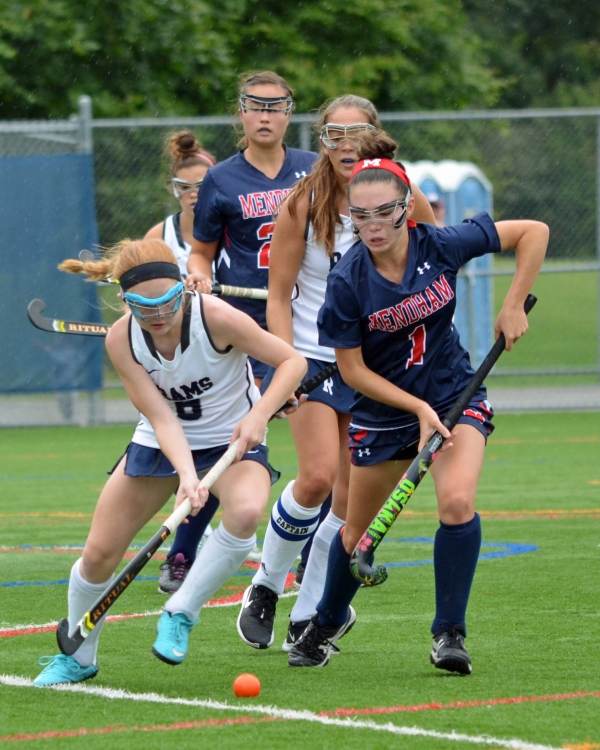 Photos by Sandy Seegers The Rams' Lexi Campbell, left, vies for the ball with Mendham's Izzy Pampalone during a game on Saturday, Sept. 8, 2018.
Rate this item
(10 votes)
Tweet

RANDOLPH _ Carly Snarski made the pitch to Lexi Campbell and the Randolph senior wasn't going to take no for an answer.

"You have to play field hockey," said Campbell, recalling Snarski's plea. "You have to. You need to try it. It'll be fun."

It didn't take long for Campbell, a freshman, to commit to the Rams' program. The two knew each other through the New Jersey Colonials Girls Ice Hockey Program and Snarski felt Campbell could easily transfer her skills from the ice to the turf.

Campbell, as expected, made great strides in a few weeks and scored the first goal of her varsity career early in the opening half when Randolph edged Mendham 2-1 in NJAC-American Division action on Saturday, Sept. 8. Another talented freshman, Sarah Bona, converted two minutes later for the Rams, who returned only three starters from last year's squad that went 15-4-3.

The win was the first of the season for Randolph, which suffered losses to Montclair and West Morris before rebounding with the victory over the Minutemen.

"We had one of our best practices yesterday," Rams coach Gina Adickes said. "It was super intense. The girls were cutting hard and hustling every second. I think it fed into today's warmup and game."

Friday's practice featured a knee-tap drill designed to improve the players' footwork and force them to get low. No sticks were used. The objective of the drill is to step forward and reach. Randolph also honed its long-distance passing. If a ball was missed and rolled onto the track, the Rams had to do sprints.

"The girls backed each other up. They were supportive," Adickes said. "I think they felt like 'The harder I work...'"

Randolph (1-2) was certainly charged up from the start. The 5-foot-2 Campbell, a right wing/midfielder, sent the ball across the goal line 3:03 into the game after receiving a pass from Olivia Meyers. Two minutes and three seconds later, Bona recorded her second goal, putting the Rams up, 2-0. Campbell had the assist.

Kristine Lynch initiated the scoring sequence that culminated in Campbell's score. Lynch sent the ball down the right side to Snarski. Meyers then received it and passed to Campbell, a center in ice hockey. Campbell, in the middle of the circle, fired into the right side.

"It was extremely exciting," Campbell said of her first goal. "It was kind of a rush. It was awesome."

Bona, who stands out because she is 5 foot 10, considered cross country because she enjoys running but went with field hockey. Her reasoning?

"I did field hockey clinics in the past and liked it," Bona said. "I wasn't sure about cross country. I used to play soccer. I was a goalie and didn't like that because I like to run. Field hockey is a team sport and it feels like a family. I'm learning so much from my teammates."

Marissa Biancone had a hand in Campbell's goal, setting things in motion with a through ball. Bona got her stick on it, got past several defenders and put the ball through the goalie's legs.

"I wasn't expecting it. It was really exciting," said Bona, who plans to play basketball and take part in spring track.

After dominating in the first half, Randolph played a great deal of defense after the break. Mendham (0-1) frequently surged into the Rams' territory with hopes of drawing even. The Minutemen broke through when forward Lily Weeks scored with 9:02 remaining. The Rams did not make a shot in the second half.

"We were sleeping at the beginning," Mendham coach Breanne Neff said. "Overall, we've been doing a good job but we weren't finding each other today. We weren't working together."

Senior back Emma Marks was exceptional for the Minutemen, doing what Neff called "an amazing job and stepping up when we needed her."

Meyers excelled in the midfield for Randolph. Previously, Meyers, a senior, was the left wing. She notched 17 goals last fall. Eve Guttman was effective as the Rams' sweeper.