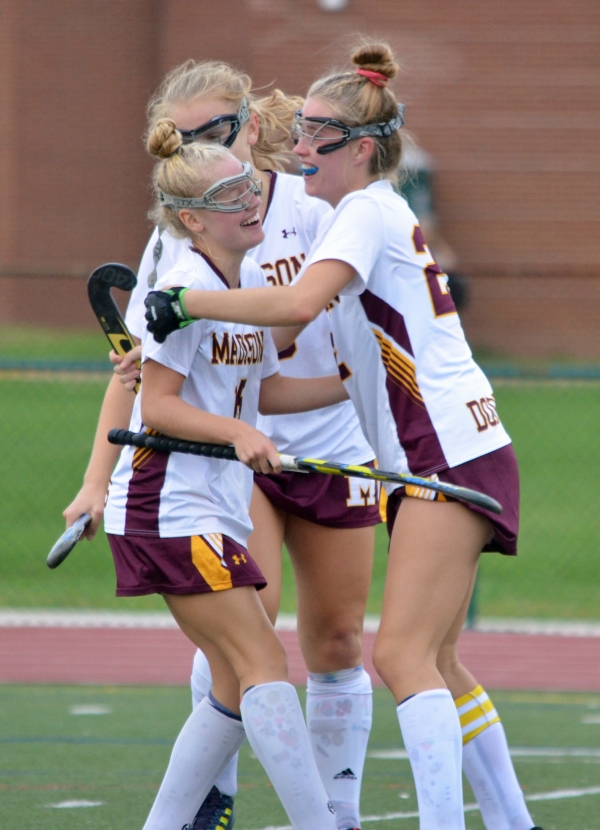 Photos by Sandy Seegers Chase Cmaylo, left, is congratulated by Sarah Cox and other teammates after scoring Madison's first goal versus Warren Hills on Sept. 21, 2018.
Rate this item
(5 votes)
Tweet

MADISON _ Chase Cmaylo had no problem getting the job done as a sophomore, racking up 15 goals and nine assists for Madison.

This fall, though, Cmaylo has admittedly been a little off. Nothing's changed for the junior forward. She simply couldn't convert.

On Friday, Sept. 21, Cmaylo rediscovered her scoring touch and put the ball in the goalcage not once, but twice, in the second half to power the Dodgers to a 2-1 non-conference victory over Warren Hills.

"I think that may have brought some momentum to the team," said Cmaylo, whose second and third goals were assisted by Kerrianne McClay. "We weren't really frustrated but I, we, really wanted to score. We took more chances after the first goal today."

For 44:23, the teams engaged in an even battle. Madison did not get out to an impressive start but quickly righted itself versus Warren Hills, the Hunterdon/Warren/Sussex champion and Group III runnerup. Each team was in command for short periods of time. When Madison ventured into the Blue Streaks' territory, it was typically with McClay leading the charge. Thirteen minutes after halftime, Warren Hills had two of their seven second-half corners but Madison's defenders made sure scoring plays didn't materialize.

Cmaylo got the Dodgers (6-1) on the scoreboard 14:23 into the second half after picking up a rebound following a shot by McClay. She took two steps and sent the ball into the right side of the goalcage. Cmaylo's second goal was four minutes later. McClay had the assist again. This time, a scramble ensued after McClay took a shot on goal. Cmaylo sent the ball left and a Warren Hills defender missed the clear.

Madison coach Ann Marie Davies was glad to see Cmaylo knock the ball in and noted she "was due."

"We didn't get down when there was no score," said sweeper Sarah Cox, one of the standouts on defense for Madison. "We played well. We pumped each other up. We were in beast mode. We didn't have much energy when we came out then we began to play with heart and to play together."

Cox played the right post for the defensive corner unit and said it "was a little bit intimidating."

"We needed to be strong minded and get the ball out," she said. "We were aggressive in the circle. You have to go big or go home."

The 2-0 advantage seemed to be enough but Warren Hills (5-2-1) struck back, getting a goal from Juliana Valli with 7:28 remaining. Prior to the Blue Streaks' goal, there were more tense moments for the Dodgers as Warren Hills attempted three corners in a span of two minutes. Madison repelled each one successfully.

"This was a hard-earned win," Davies said. "The kids played well under pressure. We picked it up (after a slow start). We figured out how to get the ball through and figured out their system. They had one kid hanging back."

Davies praised goalie Nicole Ducey (8 saves), Cox and Margaret Sheeleigh. According to Davies, Sheeleigh was "everywhere" and her hustle had a major impact on the outcome of the game.

"We played with a lot of heart," Cox said. "This is going to be a turning point. I'm proud of our team,"

"This is a sneak peek into what the rest of the season will be like," Cmaylo said.