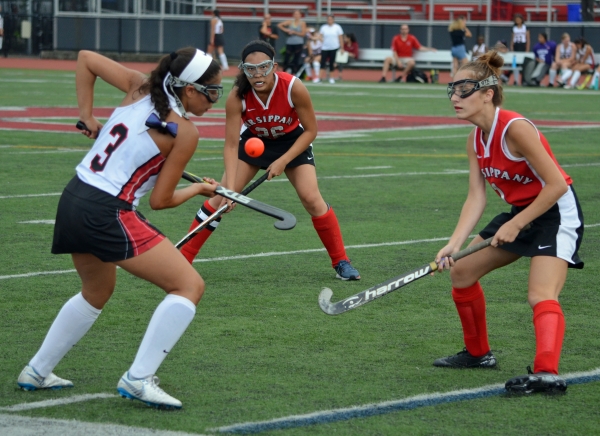 BOONTON _ Every team begins the season in search of something: Improved defense, an uptick in offensive output, more cohesive teamwork.

As for the Boonton field hockey team, they are seeking great moments. The Bombers know there may be only few at times. Ultimately, they'd like to string them together endlessly and knock off a few of Morris County's top squads.

On Monday, Sept. 9, the Bombers didn't have an excess of great moments but had enough to shut out Parsippany 1-0 in a game, whose outcome was determined by a second-half goal by Rebecca Deffler.

"We want to have more and more great moments every game," Boonton coach Cindy Tserkis-Schlitt said. "If we have solid passing combinations, it's going to be a great season. We have a lot of skilled individuals. We're meshing now."

That's absolutely true. After edging the Red Hawks, the Bombers, who have only four starters back, have gone 3-2-1. The two setbacks were by one goal to defending Morris County Tournament champion Madison (1-0) and MCT runner-up Morristown-Beard (2-1). According to Deffler, a senior left wing and two-year starter, Boonton possesses many noteworthy attributes.

"Coach Londino changed the team," she said. "We're playing together, not as 11 separate players."

Unselfishness and those highly desirable great moments have been on display over the last few weeks. Versus Parsippany, Deffler converted off a corner, snapping a scoreless deadlock with 9:34 remaining. Deffler inserted the ball, sending it to Rainey Clark at the top of the circle. Clark passed to Mya Russo, who tapped it into the right post.

Tserkis-Schlitt praised Clark, a senior offensive midfielder, for her "great vision and ability to set up the transitions upfield." Clark, a center back and center midfielder as a junior, certainly was active, bringing energy to the attack. Sophomore Bella Viruet was effective at forward as was her senior sister Angela, the center back.

In keeping with the theme of teamwork, everyone on the field for the Bombers did their part, denying Parsippany throughout, including late in the second half when it was determined to pull even.

"We're developing and regrouping," Tserkis-Schlitt said. "We graduated 13 seniors but we still have 12. Only a handful started. Everyone's got a phenomenal attitude. They grow every time they're on the field."

The Red Hawks dropped to 0-3 with the loss to the Bombers but coach Rebecca Lilienthal and her squad remain positive.

"We played much more together today," Lilienthal said. "We're moving in the right direction. They're listening to what we're saying and putting it together. Next, we need to convert on our opportunities."

Junior wings Lindsey DePetris and Priscilla Wong powered the attack for Parsippany, which was edged by one goal in each of its first four games, while senior Alex Bond and Kaitlyn Fang were effective in the midfield. Fang, one of five captains, sees many good signs and vowed that the team was not discouraged by the loss or being winless.

"I feel like we're communicating more," Fang said. "We're playing as a team and encouraging each other. We're covering back and moving up. We're growing as a team. We're not going to let past events get us down. We're going to use this as motivation to move us forward."

Two days after blanking Parsippany, Boonton fell to Madison. On Sept. 20, the Bombers turned in an excellent showing versus the Crimson.

"It felt good to come close," said Deffler, referring to the Madison game. "That's the cloest we've been in awhile. It motivated us and proved we can play against those teams."

Senior forward Sammy Brancato attributes some of the Bombers' success to a revamped offense. Their formation was changed prior to the first game and it didn't take long for Boonton to become acclimated to it.