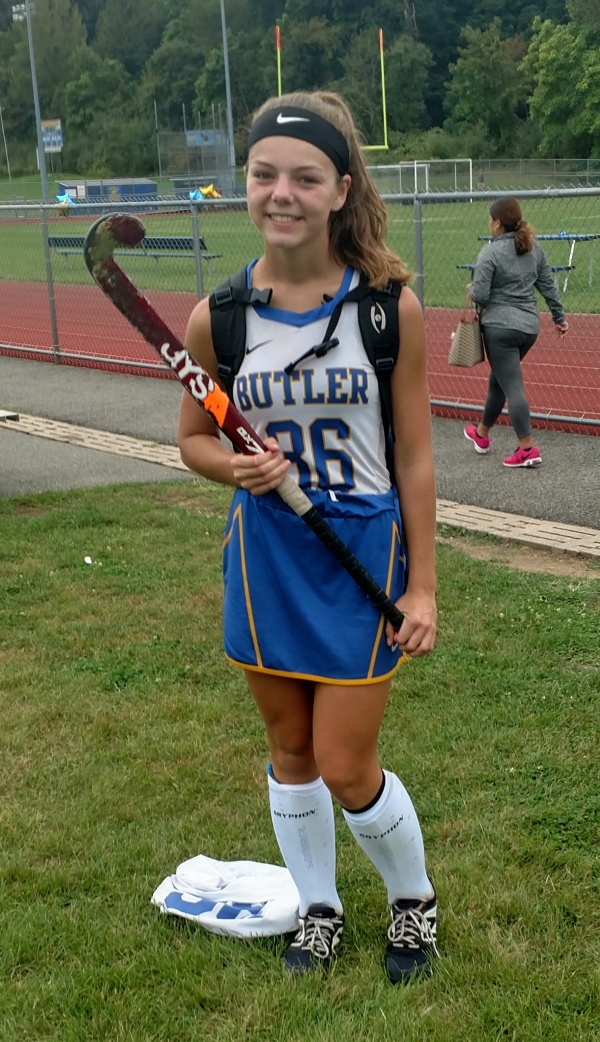 BUTLER _ Meredith Fierro was presented with a golden opportunity and she made sure the chance would pay off big time for the Butler field hockey team.

Fierro, the Bulldogs' savvy and productive junior center midfielder, cashed in by converting a penalty stroke midway through the second half to help Butler edge Pompton Lakes, 1-0, in a Northeast Field Hockey League game on Saturday, Sept. 14 at Memorial Field.

Butler (4-2) has now won two straight games and three of its last four as it aims for its first winning season. Pompton Lakes (1-4-1), a perennial Passaic County power for most of the last three-plus decades, put up a stiff fight, but the the Cardinals could not find the equalizer to the goal by Fierro with 17:01 left in the second half.

"I just really had the confidence that I could find a way to flick the ball into the back of the cage there," said Fierro, who now has two goals and one assist this season. "Pompton Lakes played well but we were really determined to come out on top in this game. Lately, we hadn't played as well as we would have liked when we faced off against them but, today, we were focused in on delivering a different, more positive result. And we all worked hard for the full 60 minutes and were able to persevere and get a win."

Pompton Lakes had won the previous three meetings between the teams, including a 2-0 verdict over the Bulldogs in a North Jersey Section 1, Group I state tournament first-round game. The last time Butler had defeated Pompton Lakes before Saturday was in 2014 when the Bulldogs earned a 2-0 triumph behind two goals from senior standout Amber Haslett in a North 1, Group I opening-round game.

Also playing an important role for the Cardinals was sophomore goalkeeper JoJo Catalano, who was guarding the cage instead of regular starter, junior Julia Frankiewicz, sidelined with a high fever. Catalano stopped four shots and posted the shutout for the Bulldogs, who are off to their best start since 2014, when they began 9-7 on the way to an 11-10 campaign.

"JoJo came in and did a very good job for us and Meredith also came up with an excellent effort," said Butler 13th-year coach Kate McAuliffe. "We also got strong performances right down the line on offense, defense and in the midfield. It was an all-around solid team effort."

Senior forward Emma Vanderhoff and senior back Rachel Parisi also turned in top-notch efforts for the Bulldogs, who have outscored their six opponents, 9-4, this season, while posting four shutouts.
The 2014 Butler squad went 11-10 for the first winning season in more than two decades.

Pompton Lakes, which has 14 Passaic County Tournament championships, the most of any school since the event began 44 years ago in 1975, put up a battle and had a couple of opportunities in front of the Butler cage in the last four minutes of the game. However, Catalano and the defense were up to the task of keeping the pressuring Cardinals off the scoreboard. And Fierro, also an outfielder and catcher on the Butler softball team, helped make her one tally stand up with outstanding defensive stickwork in the midfield.

The Cardinals, who have a rich field hockey tradition and whose most recent PCT crowns were back-to-back first-place finishes in 2007 and 2008, were sparked by Allan's daughter, Danielle, a four-time first-team All-Passaic County performer and a two-time North Jersey Player of the Year and three-time all-North Jersey first-team choice. The younger Allan later had a standout four-year field hockey career at Quinnipiac University and earned her doctorate in physical therapy in 2018 from Quinnipiac.

Veteran coach Eileen Allan, in her 34th year at the Cardinals helm, has piloted nine league championship teams in addition to the county titles. The Cardinals have 13 sectional state championships under Allan, including a Group II state title in 1999. Pompton Lakes won over Collingswood in the final. The Cardinals fell to Moorestown in the 1998 Group II final and to Shore Regional of West Long Branch in the 1993 Group I state final.

Junior Kristen Colello had three saves in the cage for Pompton Lakes, surrendering only the Fierro goal on the penalty stroke.