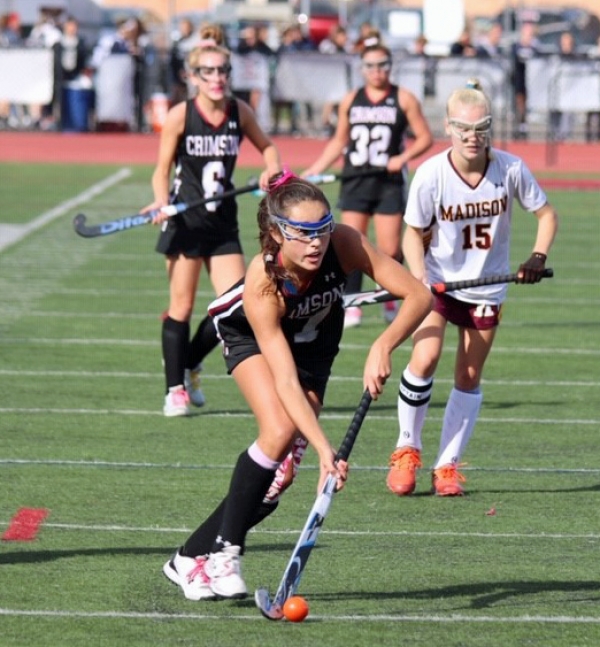 Photos courtesy of Tom Plante Sofia Scordley of Morristown-Beard is in possession of the ball during the Crimson's MCT semifinal game versus Madison.
Rate this item
(7 votes)
Tweet

BOONTON _ Morristown-Beard wasn't playing for a title - that's next - but the feeling was nearly the same, maybe even better.

The Crimson, buoyed by Ella Singer's goal off a corner 7:02 into the second half, edged two-time defending champion Madison, 1-0, in a Morris County Tournament semifinal on Saturday, Oct. 12 at Boonton High School.

It was Morristown-Beard's first win over the Dodgers in school history and earned it a return trip to the MCT final, where it will square off against top-seeded West Morris. Although Singer is a transfer from Millburn High School, she knows well the significance of the third-seeded Crimson ousting second-seeded Madison. It would be equivalent to the Millers stunning powerhouse West Essex.

"This is amazing," said Singer, a junior center midfielder. "It was great. It was just our time to show that we could do it."

Last fall, Singer had another exhilarating moment, registering the tying and winning goals when Millburn defeated Middletown South 3-2 to claim the North Jersey Section 2, Group III crown. It was special because it was the Millers' first sectional championship in 25 years.

Singer, the inserter on corners, sent the ball to Emma Karrat at the top of the circle. Karrat passed to Singer, who scored into the right side. It was a tense 22 minutes and 58 seconds before Morristown-Beard could exhale and soak in the historic victory.

"We've been so close and we've not quite done it," Crimson coach Kate Alderman said. "The girls have worked hard. They wanted it. It was a team effort all around. Beating Madison has been a goal of ours. We'll celebrate today then focus on what's next. We want to win the counties."

Annabel Plante, also a junior midfielder, considered the win over Madison, which had captured 23 MCT titles overall and 11 of the last 13, "surreal."

"Since freshman year, we've wanted to beat Madison," Plante said. "I think it happened because of the way we work together. We wanted it badly. It's incredible."

Apparently, so was the dance party that the Plante family hosted on Friday night. Not only did the Morristown-Beard players show off their dance moves, they feasted on pasta, chicken fingers and Halloween cookies. Despite the early start time - 9 a.m. - and some restless sleep, the Crimson were ready to go.

Singer admitted to being "a little nervous" about playing at 9 a.m. She rose at 6:30 and ate a protein bar. Plante had her mother, Kara, drive her to Time For A Bagel in Morris Plains before heading to the game.

A center forward before switching to the midfield, Singer has been invaluable to Morristown-Beard this season.

"Ella is used to being an attacker and our formation is different than what she's used to," Alderman noted. "Having her on the post to get tips is critical. She's really bought into our system. It's been great having her."

Alderman said that the entire defense stood out, so much so that it was difficult to fete a few players.

"We were recovering back," she said. "We had a quick counterattack. I think we caught them off guard with that. The defense supported one another. They were great at double teaming. Madison likes to dribble. We had to use our speed and quick passes."

Plante, a Harding resident, knows several of the Madison players, including goalie Charlotte Villano, a close friend, well. She and Villano went to kindergarten through middle school together at the Peck School. The triumph left her elated but she took time to think how Villano and the Dodgers must have felt.

"It's helpful that we went last year," Alderman said. "We know what to expect and will have more confidence. There was nervous energy last year but we've already had the experience and will benefit from it."