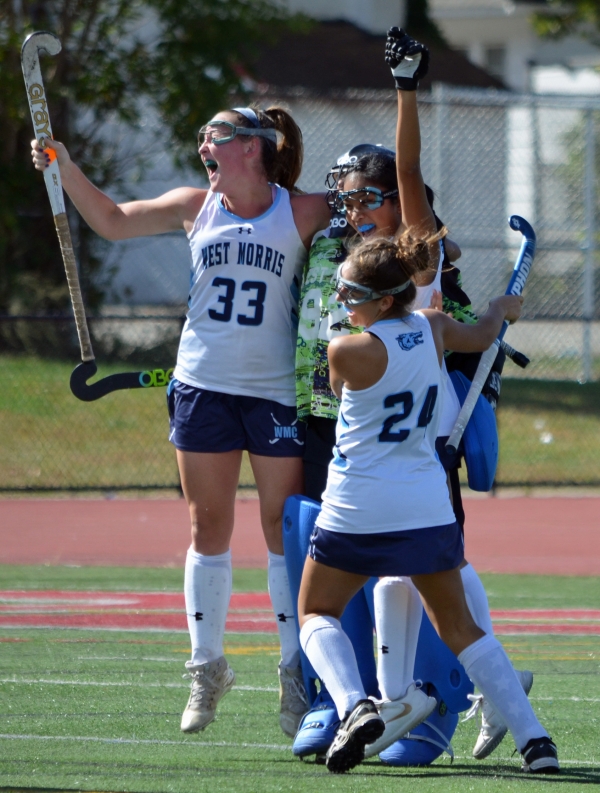 BOONTON _ West Morris coach Courtney Barnett advised her players not to forget the game that brought their hopes of a Morris County Tournament title to an abrupt end.

Seeded second in 2018, the Wolfpack appeared likely to gain a berth in the semifinals and advice to the final. Tenth-seeded Parsippany had different plans and ousted West Morris 1-0 in the quarterfinal round.

Remembering the pain and disappointment of that early exit, West Morris, the top seed, blanked Chatham 4-0 in a MCT semifinal on Saturday, Oct. 12.

"That was awful," said Sophia Prata, who knocked in two goals against the Cougars, when recalling the upset. "Our coach told us to hold onto that feeling and use it when it was most needed. We were out for revenge today. To capitalize on that... I'm just speechless."

Seniors Jenna Leonhardt and Sarah Bietka also converted for the Wolfpack, intent on living up to their No. 1 seed. West Morris struck twice in a span of one minute, 38 seconds in the first half. The goal that put the Wolfpack up 1-0 came off the stick of Leonhardt 12:55 into the opening half. Lauren Compoli, who sprinted to get to the ball after it was cleared out of the circle following the corner, picked up the first of her two assists on the score.

Compoli, a midfielder, then set up Prata's goal which staked West Morris to a 2-0 lead less than two minutes later. Prata said there was "a lot of commotion in front of the goal" before she put the ball into the right side of the cage.

"There were relentless efforts and second efforts," Barnett said. "Lauren was one of the ones putting in the extra effort. That hustle makes a difference. Efforts like that take a lot off of one or two individuals doing it all."

Everyone was doing everything for the Wolfpack and there was simply no quit.

"We were very, very confident," Prata said. "We play as a team. Everything we do, we do as a team. It's so amazing to win. We have another opportunity to showcase our skills. That's because we did it together."

West Morris, which last appeared in the MCT final in 2016, falling 1-0 to Morristown, was intent on capitalizing early and it did. However, Chatham had its share of surges for the remainder of the first half and did not let up after the break either.

After halftime, Bietka and Prata knocked in goals off corners. Bietka put the Wolfpack up 3-0 three minutes into the second half. Prata closed it out with 2:17 remaining.

"It's tough to see an opponent three times and to win three times," Barnett said. "Chatham is one of the best in the conference. It was huge to score first and to get on the scoreboard early."

The Bodnars, Victoria, the goalie, and Brittany, the left back, were solid on defense for West Morris (15-1-1).

***PLEASE CHECK BACK FOR PHOTO GALLERY***