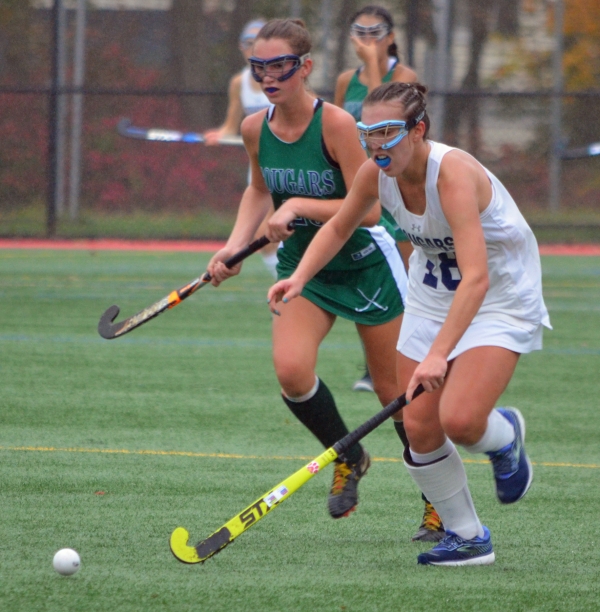 CHATHAM _ The members of the Chatham field hockey team couldn't contain themselves as they navigated the hallways of the high school prior to their North Jersey Section 2, Group III semifinal.

"We'd see each other and we'd yell. We'd shake each other," said Alexa Lee, whose second-half goals powered the second-seeded Cougars past Colts Neck 3-1 on Tuesday, Oct. 29. "Everyone was so excited."

The players, who wore their shooting shirts and uniforms to school, had an abundant amount of energy during the day and managed to turn it up even more at game time. That exuberance meant extra hustle and determination.

Lee, a junior forward, knocked in what proved to be the game-winning goal 6:11 after halftime. Lee, a first-year starter, received a pass from Gabby Cutlip and deflected the ball into the right post from close range.

"It's been a very long time since we've been to the sectional final and the girls deserve it," Chatham coach Kaitlin Leyden said. "The girls brought a lot of energy and it was hard to compete with it. It was their mindset... Their passing and technique were on and they were determined to win. They were all over the field."

Those factors kept Colts Neck at bay for much of the game. The Cougars' tenacity and focus halted the visitors nearly every time they had possession. Carlin Chazen, a junior, and Ella DuRie, a senior, were two of Chatham's standouts on defense.

Jess Thesing was the lone Colts Neck player to break through, connecting off a corner three minutes into the second half. Thesing's goal knotted the score, 1-1. The Cougars, however, did not get rattled.

"We worked so hard for it," Chazen said. "We were so pumped up for this. We worked together and communicated. We run a lot in practice. We condition every day and are disciplined. We knew what to do and knew we had to hustle."

After Colts Neck scored, Chatham, which has won three of its last four games after a three-game losing streak, allowed few opportunities. The players' minds were on moving to the sectional final and nothing was going to stop them. Lee ensured the trip to Friday's title game versus Middletown South, registering her second goal with 4:17 remaining. Lee dribbled into the circle, dodging two defenders on the way and took a shot. The Colts Neck goalie, Steph Lonano, dove to her left to make the save but Lee got a stick on it and sent the ball into the center of the goalcage.

In the opening half, the Cougars, who outshot Colts Neck, 11-6, received a goal off a corner from Avery Buckman with 9:37 left.

DuRie, one of nine seniors on Chatham's roster, described the win as "one of the best feelings."

"We all jelled," she said. "We're playing well. We've improved so much as the season has gone on."

According to Lee, the Cougars (13-4-2) likely will dress up for Halloween on Thursday and perhaps do some skits to stay loose. Last Friday, one day before their quarterfinal state tournament game against Somerville, Chatham went to a salon, Luxe on Main, and all of the players got cornrows, a bonding activity that lasted three hours.

Leyden is looking forward to the final as are her players.

"Being in the final is a great feeling," Leyden said. "We've been working on winning a sectional title since I got here. Win or lose, the girls are going to be proud of themselves."