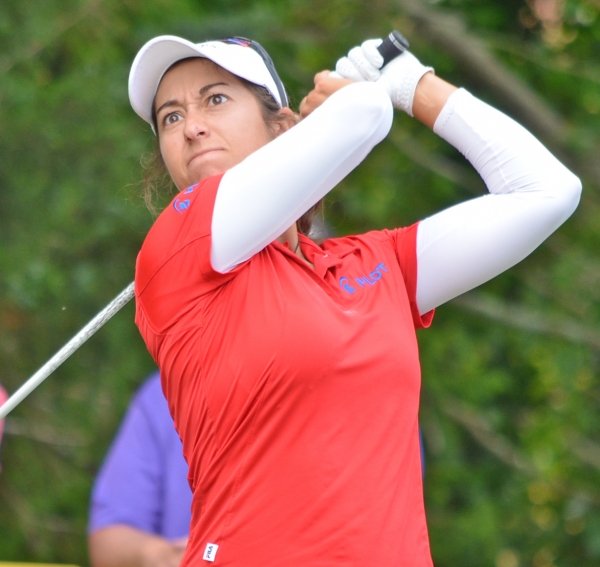 Photos by Maryann Harlow Marina Alex, coming off a sixth-place finish at the Volvik Championship, tied for 56th at the 2016 ShopRite Classic.
Rate this item
(0 votes)
Tweet

GALLOWAY TWP. _ Marina Alex's performance at the Volvik LPGA Championship was a dream.

With the exception of a third-round score of 75, Alex's game was consistent and efficient. After three rounds of the tournament, held in Ann Arbor, Mich., Alex was 9-under and holding one the the spots stop the leaderboard.

The Wayne native ended tied for sixth place - her best finish as a professional - and hoped to bring that magic to the LPGA ShopRite Classic. Instead, Alex, in her third year on tour, shot a three-round score of 213 and tied for 56th.

Anna Nordqvist of Sweden became the first player to claim back-to-back titles by going 17 under.

"Things happen," said Alex after posting a 72 in the first round.

On the very first hole at the Stockton Seaview Golf Club, a 351-yard par 4, Alex was in trouble, hitting her tee shot into the rough. Her second shot wound up in fescue. She took an unplayable and carded a double bogey.

"I had a nasty lie in the rough on my tee shot," she said. "The next one was really bad."

After that, Alex's objective was simply "to make as many birdies as possible."

Paired with Lindy Duncan and Austin Ernst, women she is well-acquainted with from her college playing days, Alex, who survived the cut at the ShopRite for the first time since 2012, had four birdies but also three bogeys in the opening round - hardly what she had planned. Her second round featured four birdies.

"Everything was just pretty much average," Alex said. "Nothing stood out. It's always a level playing field. Anyone can do well if the course suits them."

Alex's first round ended on a high note with a birdie. All of her shots were accurate. She sank an eight-foot putt to close out what certainly was a trying round.

"I came in here trying to carry the momentum from the Volvik," Alex said. "It didn't go very well but there's always tomorrow."

On Saturday and Sunday, Alex, inducted into the Vanderbilt University Hall of Fame last January, parred then birdied No. 1.

The Volvik was the Apex of Alex's career thus far. After first and second-round scores of 68 and 67, she stumbled a bit, shooting a 75 on the third day. She closed out with a 71. Also in the top 10 were other American players like Christina Kim, Jessica Korda, Lexi Thompson and Angela Stanford.

When she was 9-under at Ann Arbor, all aspects of her game were working.

"The targets I'm picking, I'm hitting," Alex said. "I'm getting close to the hole... I'm judging the greens well. I'm putting myself in a great position for birdies."

Her parents, who have been to four tournaments this year, were not spectators in Michigan. Alex's mother, Marissa, and her two sisters watched the action on TV in Florida.

"It was just fantastic," Marissa Alex said. "We were most excited about the 9-under. The third day it was windy but Marina held her ground. On the last day, Marina chipped in on the 17th hole. That was great, too. We were so pleased, so happy."