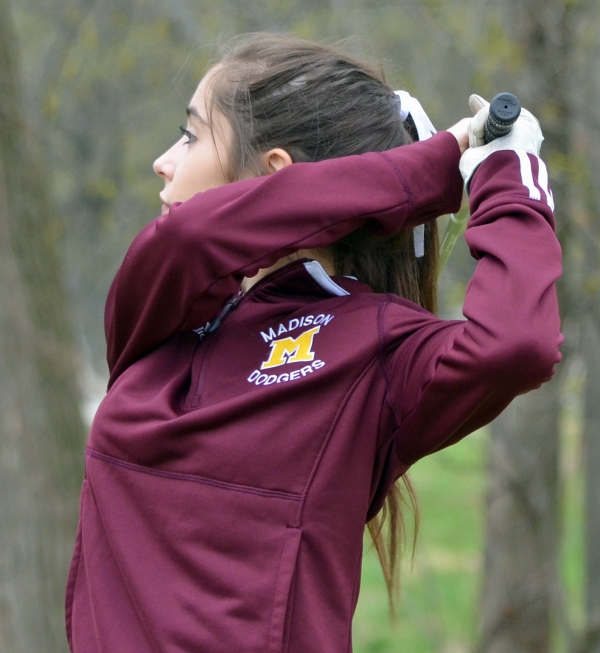 MORRISTOWN _ A freshman, Madison's Emma Yousey is still becoming accustomed to the many facets of golf.

In only her second high school match, Yousey shot a 52 over nine holes, serving as the main catalyst in the Dodgers' 231-235 victory over Morristown on Thursday, April 20 at Morris County Golf Club.

Sophomore Alex Artigliere, junior Sage Geyer and another freshman, Maddy Shannon, also figured into the scoring for Madison, which moved its record to 2-0. Morristown was without one of its standouts, Elizabeth Strambi, who was competing in a basketball tournament.

"It was so close," Madison coach Paige Diamond said. "Both teams had great rounds. It was a lot of fun."

Yousey, also a field hockey player, was solid throughout. Diamond was impressed with her round, considering it was only the second time she stepped foot onto MCGC.

"Emma is very consistent," Diamond said. "She hits the ball straight and has a smooth swing. She's learning very quickly."

Geyer was not very pleased with her round but said she "tried hard and was excited we won."

The match was Geyer's first this spring. Her drives were "a little off" but she got satisfaction from her short game.

"This course is very tough," Geyer noted. "It's hilly and long. I haven't played a lot yet so I was a bit rusty."

Carmen Tauriello and Sarah Chelo are the lone seniors on the Morristown squad and have been co-captains for the last three seasons. They lead a Colonials team comprised of one junior, two sophomores and a freshman.

Tauriello, whose family belongs to Spring Brook, became serious about golf as a freshman and took her game from the driving range to the course. Chipping is the strongest aspect of her game.

Tauriello and Chelo are glad that more students at their school have become involved in the sport.

"More people are getting into it," Tauriello said. "It's becoming opular. There are more girls on the practice team."

Chelo, too, considers chipping her forte yet loves driving. Her top score over nine is 43 and she'd like to break 40 as would Tauriello. Chelo spends much time around golf - she has worked in the bag room at Spring Brook for several summers.

With one of their toughest matches behind them, Madison is ready for more challenges.

"Our girls are focused," Diamond said. "I keep telling them that every shot is a new shot. I also remind them not to bring the last hole into this hole. We want to keep growing the program, to keep improving."

View the embedded image gallery online at:
https://soar-nj.com/sports/golf/item/1406-madison#sigProId8a5f5ff03b
More in this category: « Alex shoots 73 in third round MK'S Conroy prevails in two-hole playoff »