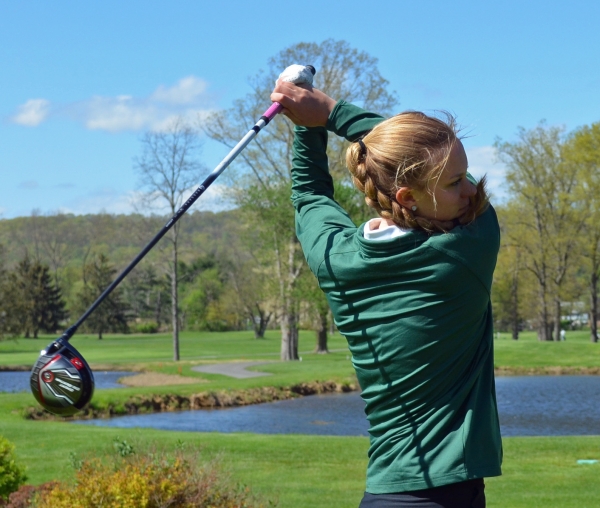 Photos by Sandy Seegers Christi Conroy of Morris Knolls prevailed on the second hole of a playoff to garner the title at the Morris County Girls Golf Championship on Wednesday, May 3.
Rate this item
(8 votes)
Tweet

FLANDERS _ It was the type of putt that makes even the most veteran golfers squeamish.

Morris Knolls junior Christi Conway had a knot in her stomach as she assessed the distance - 30 feet - between her ball and the cup on the second playoff hole during the Morris County Girls Golf Championship at Flanders Valley on Wednesday, May 3. The advice running through her head - words spoken by her mother, Karen - quelled her nerves long enough to make the lengthy putt.

Just get it close. Get it there then putt it in.

Conroy's initial putt on the par-4 second hole on the white course traveled 29 feet. The finishing one, of course, only needed to travel 12 inches before dropping.

Accuracy on the green enabled the 6-foot-1 Conroy, a three-sport athlete, to claim the championship, edging out Mendham's Caroline Fischbach by a mere stroke. The players both shot 45s over nine holes on the blue course to force the first playoff in the history of the tournament.

"I definitely was not expecting a playoff," Conroy said. "It was crazy. I was nervous. I wasn't really ready for it. I just played my game and the outcome was good."

The playoff did not start out well for Conroy. She hit a high drive that went left and bounced into a bunker. Her shot out of the sandtrap went 20 yards. Fischbach got off a solid drive but landed behind a tree and had to punch out. Her ball found a greenside bunker. Each one of them finished the hole with a 6.

Conroy was much steadier on the second hole. She was accurate off the tee and landed a 50-yard approach shot on the green before the putts sealed her victory. Fischbach got into trouble when her third shot went over the green. She got on and was within seven feet. However, her putter failed her and she had a 6, one more than Conroy.

"The playoff was rough," Fischbach said. "I like to make friends with people and call it a day. I'm not really that competitive. I have to improve on that. I like being a nice person. That's how I am. It works out for me."

Fischbach, also a junior, indicated that her dad, Karl, whom she began golfing with six years ago, would not be pleased that she didn't exhibit more fire in the playoff.

"He won't be happy," she said. "But I really do plan to get better. My goal is to play college golf. I have to stay focused on what matters."

Fischbach, reliant on her irons, moved to Mendham from the state of Washington in 2014, just in time to begin high school. She golfed while on the West Coast and, when the family moved east, they joined Mendham Golf & Tennis Club.

The Conroys also are a golf family and are members at Rockaway River Country Club. Conroy's father, Peter, often takes to the links.

Conroy, a middle hitter for the volleyball team and a forward/center for the basketball squad, attributed her solid showing in the tournament to playing or practicing every day since Sunday. She had a lesson, too, from Mike Sargenti, one of the pros at RRCC. The instruction focused on putting.

During the nine-hole tournament, Conroy had her difficulties yet often was able to right herself. She was upset about the 7 she carded on the second hole - her first one. She shanked her drive, hitting it 20 feet to the left. Her second shot on that hole went into the rough on the right. On the eighth hole, a par 3, Conroy four-putted.

"I tried to put those things out of my mind," she said. "I refuse to look at or add up my scores until the end. I don't do it as I go along."

"Christi hit golf balls all winter, in between basketball games and practices, of course," Moore said. "She is a great teammate and they truly love her success. Christi has helped other girls in the program to get better as well."