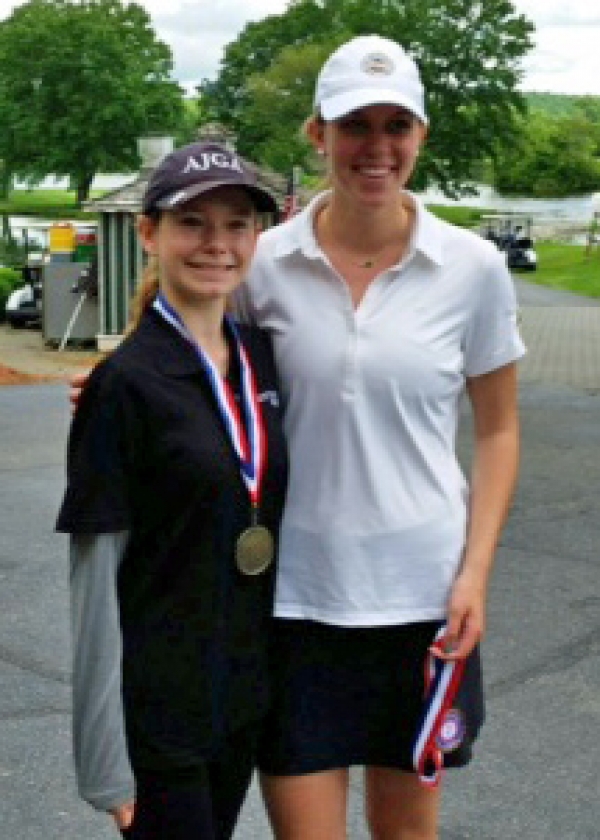 LAFAYETTE _ A year ago, Kittatinny's Annika Johnson left Farmstead Golf Club stunned by what she had accomplished.

Johnson was a freshman then and considered winning the Northwest Jersey Athletic Conference Girls Golf Tournament "a complete shocker."

Now a 16-year-old sophomore, Johnson rose to the top again on Wednesday, May 31, shooting a 36 over nine holes on the Valley Course proving that she's clearly the best in the NJAC. Her round included six pars and a birdie and her score was four strokes less than the 2016 event.

"Last year was unexpected so I wanted to do it a second time," Johnson said. "I had so much fun. I'm definitely proud of it. I was nervous when I saw everyone arriving at the course. I was still nervous during the round. I kept saying 'Don't mess up. Don't mess up.' It all turned out well. I'm very happy with the end result."

Sarah Acquaviva of Pequannock was the NJAC runnerup with a 39. Mendham's Caroline Fischbach was third with a 42. Another Mendham golfer, Lindsay Perrin, fired a 44 to finish fourth. Heather Ivans of Chatham carded a 46 and was fifth. Morris County Tournament champion Christi Conroy recorded a 47 and was seventh.

Johnson's forte was her irons. Over the weekend while playing in a three-day Hurricane Tour Tournament at Black Bear, she noticed that the shots she hit with her irons were curving left. She needed to make an adjustment and aiming to the right of the pin helped.

Her birdie came on the par-4 No. 6 hole which is downhill and over a small pond. Johnson used a hybrid club off the tee and sent the ball about 175 yards. Her shot over the pond was on target, landing seven feet from flag. She recorded the birdie with an accurate putt.

The day did not start out well for Johnson, who had to pencil in a double bogey on the first hole. Her second shot found a greenside bunker. Johnson got out of the sand but was left with a 25-foot putt. It took her three putts to complete the hole.

"It was a little after 9 a.m. and it began to rain," Johnson said. "I thought the greens would be slower so I hit the ball harder. That didn't work out very well."

Beyond that, Johnson's round went relatively smoothly. Another highlight for her was the eighth hole, which is a long par 3. Johnson drove with a hybrid, leaving the ball short of the green. She chipped on and the ball rolled to the fringe. She figured the 20-foot downhill putt would be trouble but it wasn't. When Johnson struck the putt, she thought it was too fast yet it found the cup.

"Miraculously, it went in," Johnson said. "I hit it way too hard. I thought 'Wow! That really did happen.' I was surprised. I really enjoy putting and I've worked on it a lot. It paid off."

Since triumphing at Farmstead, which she considers a second home, last year, Johnson has put in many hours trying to improve. She competes in Hurricane Tour and NJPGA tournaments to hone her already advanced skills.

Many people have played a role in Johnson's success, including her father, Keith, high school coach Matt Majka, Tom Reynolds and Marybeth Kohberger.

More in this category: « MK'S Conroy prevails in two-hole playoff Chung settling in on LPGA Tour »