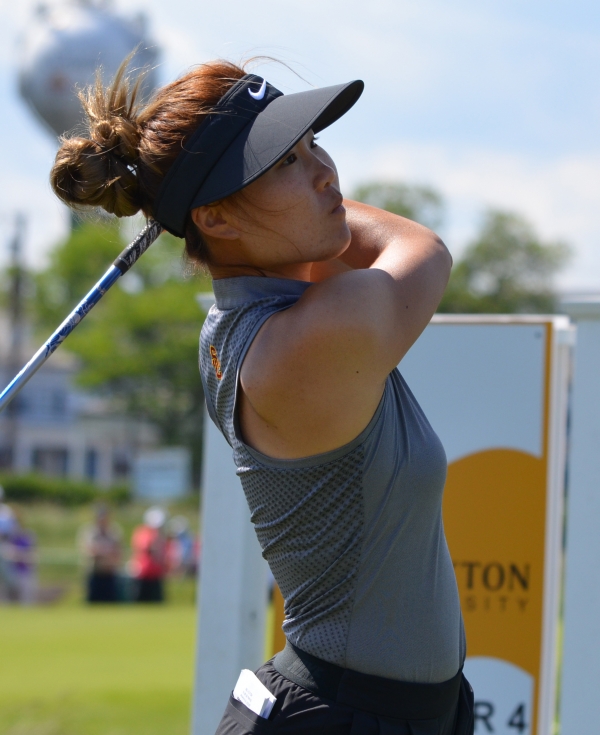 GALLOWAY _ Karen Chung began her day with "a little tap," stringing together three shots for a birdie before 8 a.m.

Chung, playing in her first ShopRite LPGA Classic, rose early for her tee time on Saturday, June 3 and quickly deposited her ball into the cup.

The Livingston native's second shot on the 351-yard, par-4 first hole landed less than a foot from the flagstick, putting her in a perfect position for a birdie. It was certainly an encouraging, feel-good moment and Chung figured she'd ride it for the rest of her round.

Steady for the remainder of the front nine, Chung struggled over the last nine and had a 74, which was three over par on the 6,217-yard Bay Course at the Stockton Seaview Hotel and Golf Club. Chung, who posted a 71 on Friday, was immediately concerned about making the cut. As it turned out, her two-day total of 145 enabled her to survive.

"It felt good. It was great," said Chung, an LPGA Tour rookie competing in her ninth tournament, of the birdie.

She was even over 10 holes then her game unraveled, mainly on the greens. Chung, paired with Jennifer Ha and Gaby Lopez, bogeyed five of her last eight holes. She birdied the 12th and 15th holes.

"My putting was kind of off," Chung said. "It wasn't very good yesterday, either. I was trying to get comfortable on the greens and adjust to them. I didn't read them very well. I just couldn't get it together. My shots were loose and I couldn't get up and down."

Being tied for 68th isn't what Chung, a recent graduate of USC whose degree is in communications, desired. Still, the chance to vie for part for part of the $1.5 million dollar purse is appealing. She's enjoying life on the tour after qualifying for it last December in Daytona Beach, Fla.

"Playing in New Jersey is awesome," Chung said. "It's my home state. I love playing here. The results are not what I wanted. It's fun playing on the tour. I'm out here with many of my friends from junior golf. I like being on the same stage as them."

Chung, a member of two Junior Solheim Cup Teams, likes the Bay Course, which she played as a junior golfer. However, she didn't remember much about it.

"The course is nice. It was ages ago when I played here," she said. "The layout is good. It's so challenging. It gives professionals a good run."

A handful of friends and family came out to watch Chung play. Among those in the mini gallery was her former piano teacher Eunmi Kim, a Bergen County resident.

"Karen is a dream chaser," Kim said. "She wanted to play golf and she made it come true. I'm so proud of her. I cry every time I see her. I can't believe it."

Kim noted that Chung was, and still is, an immensely talented musician. Chung played cello and piano and was accepted to the pre-college program at the Manhattan School of Music.

"She's so good at everything," Kim noted. "Karen learns quickly. She did very well with music then wanted to play golf. I knew she'd go far with whatever she did. She's like family to me."

Chung is the second New Jersey woman on the LPGA Tour. The other is Wayne's Marina Alex, a standout at Vanderbilt not very long ago. Chung cannot fathom that she has joined the ranks of pros, including one of her idols, Juli Inkster.

"It's awesome to see Juli at tournaments," Chung said. "I haven't met her yet. I'm too shy, too scared."

There's nothing timid, though, about her golf game, one she hopes will bring her success for many years to come.

View the embedded image gallery online at:
https://soar-nj.com/sports/golf/item/1433-chung#sigProId333c1c543e
More in this category: « No fluke as Johnson repeats Kim edges out Nordqvist at ShopRite Classic »