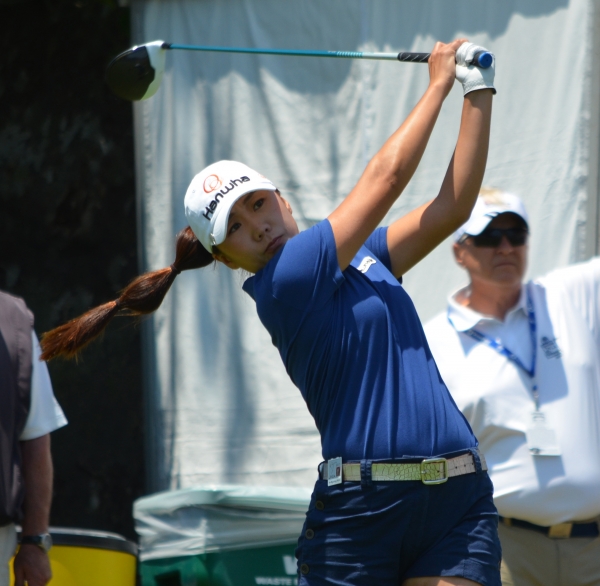 GALLOWAY _ It took a fall down the stairs for South Korea's In-Kyung Kim to rise to the top of the leaderboard and notch her fifth victory on the LPGA Tour.

In the offseason, several months after winning the Reignwood Classic last September, Kim fell and bruised her tailbone. The injury caused her to sit out several months. She returned to the tour only two and a half months ago.

On Sunday, June 4, Kim fired a 69 in the third and final round of the ShopRite Classic on the Bay Course at the Seaview Hotel and Golf Club and prevailed by two shots over defending champion Anna Nordqvist, who was seeking a threepeat, and earned $225,000. Americans Michelle Wie and Jacqui Concolino and Jenny Shin and Jeong Eun Lee finished tied for third.

"I still can't believe it," Kim said. "There were a lot of photos after the round that I didn't know (about). I feel pleased with how I played today. It was really tricky and a challenge out there but I gave my best. It's nice to win the tournament with everything that I gave."

Her play on the par 5s, she said, was strong in the first two rounds when she shot a 66 and 67, respectively. The par 3s were Kim's strong suit on Sunday. Kim felt that she "scrambled very well."

It was perhaps the bruised tailbone that enabled the 28-year-old Kim, in her 11th year as a professional, to pick up the win in her sixth event of 2017. While out of action, Kim, active with Special Olympics, worked with her physiotherapist on her upper body strength.

“I'm really happy to come back stronger than I was before,” she said. “I couldn't have done it without all my trainer's support.”

The wind, which picked up by mid-afternoon, became an issue for many of the golfers. Kim and her playing partners, Paula Creamer and Moriya Jutanugarn, were put on the clock after their tee shots on the 11th hole after it was deemed they were playing too slowly. The golfers were taking extra time to assess their shots and choose the proper clubs.

"It was very difficult," said Kim, who planned to celebrate by dancing and ordering room service. "We were on the time all the time and trying to help each other a little bit here and there to tee off first and play ready golf. It was harder... It was just another day. We just had to play a little faster."

Paula Creamer, tied with Kim for the lead at 8-under after the second round, saw her chances slip away after carding bogeys on the 11th and 12th holes. Creamer, who also bogeyed No. 14, ended the Classic in seven place.

"You can't shoot over par on Sunday. That's for sure," Creamer said. "We were on the clock for four holes. That's just not going to cut it... We just couldn't get a rhythm, especially with some of these pins and with the wind and everything. It's all happening so fast and you kind of can't regroup."

Nordqvist, hoping to join Betsy King and Annika Sorenstam as the only players to take the ShopRite Classic three times, was a bit disappointed that she didn't get to hoist the crystal trophy yet was elated to be in contention.

"Having the honor to defend back to back is quite amazing," Nordqvist said. "I've had a lot of supporters cheering me on this week. I really appreciate everyone's support. There was pressure coming into it but it was fun. I'm trying to embrace it. I love this golf course. I love hitting the shots."

View the embedded image gallery online at:
https://soar-nj.com/sports/golf/item/1434-classic#sigProId55c6609ab3
More in this category: « Chung settling in on LPGA Tour Confident Lang hoping to repeat at U.S. Open »