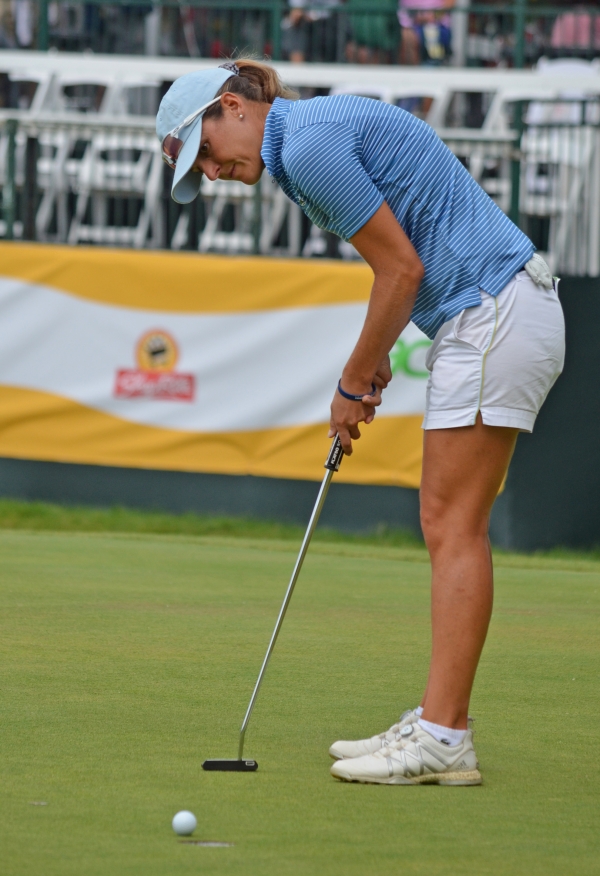 Photos by Maryann Harlow Celine Herbin putts on the 18th green during the second round of the ShopRite Classic on Saturday, June 9.
Rate this item
(15 votes)
Tweet

GALLOWAY _ Celine Herbin knew her decision to leave her job as a biochemical engineer at the age of 27 to pursue a career in golf would make people question her mental stability.

Herbin was right. Everyone considered her...

"Crazy," she recalled. "It was looking very much like a dream to be a professional golfer at 27 when I was not at all the top player in France."

Still, Herbin, now 35, persisted, playing first on the European Tour before joining the LPGA. As of Saturday, June 9, Herbin, was in an enviable position - she had the clubhouse lead after shooting a 66 in the second round of the ShopRite Classic. In the opening round, Herbin also had a 66. Now, she is 10 under par and sitting atop the leaderboard.

Sei Young Kim had played 15 holes, recording birdies on seven of her last 10 holes, when darkness halted play. At that point, she was tied with Herbin at 10-under. When a weather delay caused tournament officials to clear the course at 1 p.m., Herbin, aiming for her first LPGA championship, was on the 18th tee waiting to tee off. She returned three hours later and birdied No. 18.

"Obviously, it's a good position to be," said Herbin, a native of France. "I don't really look at the leaderboard so I didn't really know what was going on today. I was just focused on my game. So I'm glad I'm the leader but there's still lots of players who have to play. Might not be at the end of the day. What counts is the leaderboard tomorrow night."

During the weather delay, brought on by thunder and lightning, Herbin took a nap and read the news. She mentioned Simona Halep of Romania claiming her first major, the French Open, after losing three previous finals. Halep, No. 1 in the world, won one tournament in the last 12 months before triumphing at Roland Garros.

Herbin's determination, passion and the coaching of Vicente Ballesteros enabled her to earn her full card on the Ladies European Tour in 2012. According to Herbin, Ballesteros changed her game completely six months before qualifying school. She competed on the LET for several years, picked up her LPGA credentials in 2015 then went back to her country to take part in the French Open, which she won.

"It's a little improvement every year," Herbin said. "So I won on the French Open. Last December, almost won the Dubai. You have to be patient in your career. Everybody has his own time."

Will this weekend be her time? Possibly.

Ashleigh Buhai had a 66 and was in a cluster with Annie Park (65), Mariah Stackhouse (65) and Su Oh, who has two holes left to play, were behind Herbin and Kim.

Buhai has been unable to get all aspects of her game in sync. If she's driving well, she isn't putting well and vice versa.

"The last two days, it just all started to click," said Buhai, who hails from South Africa. "I really try to commit and swing through the ball this week. I found a little something on the range late Thursday and I was able to take it into Friday."

The "little something" she found with the help of her husband, Kevin, and her caddie was that she was hanging back a little bit on her right side. It was determined she had to go through more on her left side.

"I just had to swing through it, commit to it," Buhai said. "I was just kind of pulling out of the shot a little bit. It definitely played a part this week."

Marina Alex had a 68 for a two-day total of 135 and was one of six players in seventh place. The Wayne Hills High School graduate teed off at 8:32 a.m. and got her round in before players were asked to clear the course.

Being among the leaders - and making the cut - certainly was pleasing to Alex, who has not been very successful here. In her six previous appearances at the ShopRite Classic, she made the cut twice and finished tied for 40th in 2012 and was in 65th place in 2016.

"Yeah, it's really cool," Alex said of making it to the third and final round at the ShopRite. "It was a similar experience to last year at the Open. U.S. Open. I played well. There is definitely some positive stuff to pull from there and I'm looking forward to tomorrow."'

On Saturday, the key for Alex was simply hitting the ball straight and keeping it in play. She had a few trouble spots as evidenced by two bogeys but made them irrelevant with five birdies, including two on par 5s.

"I just kept it in the right parts of the golf course," Alex said. "Hit a lot of fairways out here like I did yesterday. If I wasn't on the green, I had only had one kind of really tricky up and down, which I didn't get up and down. That was kind of the only spot in I think two days, that I really put myself in a place where par was going to be pretty challenging so just hitting it in a spot where I'm safe to make a par if I'm not close enough to the hole."

Creamer, in Alex's group, was delighted to record a 66 in the second round and to tied for seventh place. Creamer, who said she "started over" after undergoing surgery on her left wrist last fall to repair an inflamed tendon, thrived with her driver, iron and wedges. She is seeking her 11th LPGA title.

"After my surgery, we just really wanted to break everything down and basically start over again. Now that I'm strong and healthy, I can do a lot more things with my golf swing. I'm able to put the ball. I'm in a better position with my hands and my wrists.

"It's not easy taking it from a driving range to a tournament. I don't know, for some reason, I've always played really well here. I've felt good. I went home after the Open for a couple days and worked on some really good things. Just taking what the golf course gives me."

Creamer penciled in eight birdies. It was the most she's had in awhile and she found it encouraging. In 2017, Creamer was tied for the lead at the Shop Rite Classic going into the final round with a 67-66 but faltered on Sunday by shooting a 74 and wound up in seventh place.

"I just want to keep doing what I'm doing with my swing, not do anything different really," Creamer said. "It's another day out on the golf course. I know last year when I came in, (it was) kind of a similar situation. I mean, I don't know what's going to happen this afternoon, but I'll be within four or five of the lead... I put a little bit too much pressure on myself and didn't quite perform the way I wanted to on Sunday. I know that going into it. I just have to go out and have fun and enjoy it."

View the embedded image gallery online at:
https://soar-nj.com/sports/golf/item/1531-herbin#sigProIde78da7e636
More in this category: « Diaz, with son by her side, among leaders at ShopRite Park secures first LPGA victory »