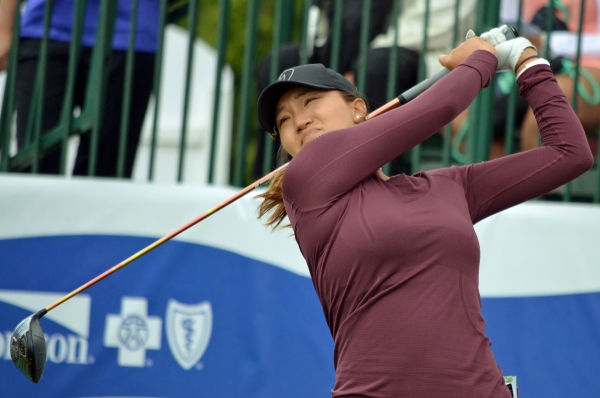 GALLOWAY _ Annie Park's golf career sputtered after a solid rookie season in which she had a pair of top-10 showings, including a tie for sixth place at the ShopRite Classic.

Park's game suffered in 2017 because of an issue with her back and she struggled mightily. She had to alter her swing to adjust to the injury and juggled time between the Symetra and LPGA Tours. As a result, Park, of Levittown, N.Y., dropped to No. 126 on the earnings list and her LPGA status went to partial.

On Sunday, June 10, the 23-year-old Park, a standout while at USC, put all of her troubles behind her when she gained her first win on the LPGA Tour, shooting a 63 in the final round for a total of 197 at the ShopRite Classic, which was held on the Bay Course at the Stockton Seaview Resort.

"It's crazy," said Park, who was doused with water and inundated with text messages after her impressive triumph. "Like I said earlier, I can't describe in words how I feel. It's my first win out on tour. I mean every win is very special but just having my family out here, my friends supporting me... The fans. My friends back home. I would like to thank all of them."

Park, who was 8-under in the closing round, fired a 69 on Friday and a 65 on Saturday. The 63 was highlighted by six birdies and an eagle on the ninth hole, where she sank a 60-foot putt.

But it certainly wasn't easy, even though Park indicated she wasn't glancing at the leaderboard. Sakura Yokomine of Japan also was on fire, posting eight birdies and an eagle, and carded a 61 on Sunday to match the course record. The second-place finish was a career best for Yokomine.

Marina Alex, a native of Wayne, N.J., shot a 64 and ended in third. A hole-in-one on the par-3, 119-yard 17th hole was a boon for Alex, 11-under when she teed off on the next-to-last hole. Sei Young Kim had an excellent showing as well, shattering the course record with a second-round score of 61.

"That was just kind of surreal," Alex said of the ace. "I finally hit a nice wedge. I'd hit some wedges earlier in to the day and I didn't feel like they were super solid. They were just like a little mishit. That one was pure. I think what happened is it hit just by the flag and bounced up on to the little bank behind and we watched it roll in. It was pretty special."

In the midst of what proved to be a top-notch tournament, Park, the NCAA titlist as a USC freshman five years ago, certainly had the most magical experience. Not only was the prize money - $262,500 - important to Park, the emotional boost that came from topping the field was much needed.

Prior to arriving at the shore, Park's best LPGA showing this year was at the MEDIHEAL Tournament in late April. She tied for 18th yet still felt that "it really got it going." On the Symetra Tour, Park took third and fifth.

"I Mondayed in and had a great two first rounds," she recalled about the MEDIHEAL. "I kind of got reshuffled into the mix."

The Bay Course at the Stockton Seaview suited Park and helped her thrive.

"I think it's just growing up playing a lot of links golf courses," Park said. "It's definitely a lot more comfortable out here because I'm so familiar with the grass, the course layout. Just everything, even the weather. That makes a huge difference."

View the embedded image gallery online at:
https://soar-nj.com/sports/golf/item/1532-annie-park#sigProId347476b7c8
More in this category: « France's Herbin hopes this is her time Mendham Perrin putts her way to title »