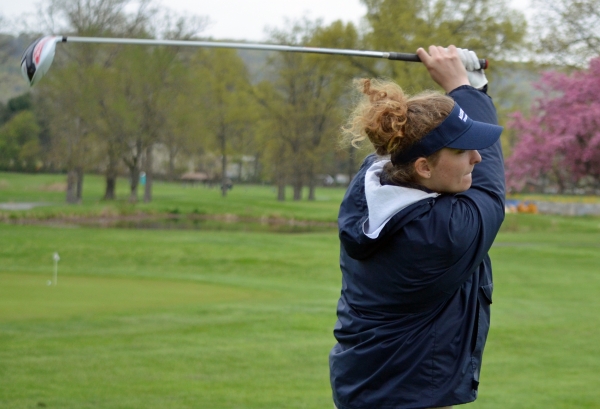 FLANDERS _ Lindsay Perrin was in the midst of discussing some of the highlights of her round at the Morris County Girls Golf Championship when she suddenly stopped, smiled and revealed that she had attained a "first."

"My putting was pretty on today," Perrin said before adding, "I had no three putts. That's never happened before."

Perrin's touch on the greens, along with accurate shots off the tee, resulted in her taking the title at the MCGGC held on Flanders Valley Blue Course on Wednesday, May 1. It wasn't easy, though, as she prevailed in a two-hold playoff versus Morris Tech sophomore Rayne Yelinko.

The two girls finished the nine-hole round tied at 42. Perrin, third behind Villa Walsh's Mary Cate McGlone and Mendham teammate Caroline Fischbach last year, sealed her victory on No. 8, a par 3, with an 18-inch putt.

"When that putt dropped, I was very relieved," Perrin said. "It feels amazing. I didn't think that this would happen. There was good competition. A lot of great golfers."

Neither Perrin nor Yelinko had ever been in a playoff and were concerned with how they'd handle the pressure. Six days earlier in a match at Mount Tabor Country Club, Yelinko had a 45 and Perrin penciled in a score of 48.

"That was fun," Perrin said of the regular season match. "Rayne's short game and putting are excellent. She's tough to compete with. It was stressful."

Prior to the playoff, Yelinko's clubs had to be retrieved from the car. She had put them away thinking she was done for the day.

"I was a little nervous about the playoff," Yelinko admitted. "I was surprised. It was sudden but it was cool."

The duo replayed the par-4 first hole on the blue course. Perrin ripped a 190-yard drive while Yelinko wasn't far behind at 177 yards. Each girl wound up with a bogey.

From there, the action went to No. 8. Perrin's tee shot landed on the right side of the green on the 116-yard hole. Yelinko sent hers to the left side of the green about 40 feet from the flag. Perrin's first putt traveled in excess of 28 feet and settled 18 inches from the hole. She sank the putt for par. Yelinko had a bogey.

Perrin, a senior, has been second, third and fourth in this tournament over her high school career. She texted her parents shortly after the playoff concluded to tell them she had won. Coach Shira Brown, celebrating her birthday, was elated for Perrin as was her teammate, Madison Sussex, who watched the playoff.

"I'm so proud of Lindsay," Brown said. "She works so hard. To see the scores that are a result of that hard work... Lindsay definitely deserves this. I had so much confidence in her in the playoff. She's a great golfer."

Brown, however, noted that Perrin seemed unhappy at the completion of nine holes. Perrin received a ride back to the clubhouse and Brown, who had been carefully watching the leaderboard, was unsure if she should approach her.

"I debated whether I should talk to Lindsay or not," Brown said. "She had her gameface on. I finally went over and asked "How bad was it?' She told me she had a 42 and I informed her that she was tied for first."

Perrin, whose mother, Laura, helped influence her decision to take up the sport, parred holes 6, 7 and 8. On the other six holes, she recorded bogeys. One of the highlights of her round occurred on No. 8, a par 3. Perrin's drive sailed over the green but she got back on and dropped a three-foot putt from the rough.

Yelinko's highlight was a birdie on the fourth hole. The 16-year-old Netcong resident, also a skier, took up golf because her father, Brian, and grandfather, Frank, enjoy playing.

McGlone, headed to Seton Hall University, where she will be a pre-med major, fired a 44. Although she was unable to repeat, McGlone said she was "lucky to be a part of this."

"I didn't have problems with anything in particular," she said. "My drives were OK. Getting close to the pin on greens was a little tough. It was chilly out there but I survived."