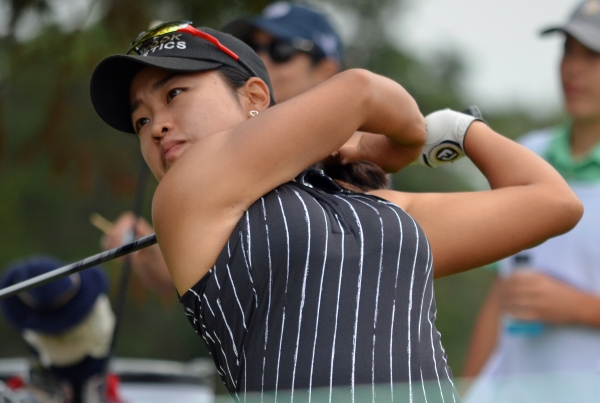 GALLOWAY _ Fresh off her win at the U.S. Open, Jeongeun Lee6 is confident, focused, determined and well-rested.

On Friday, June 7, Lee6 got right back down to business, shooting an 8-under-par 63 at the 2019 ShopRite LPGA Classic and finds herself atop the leaderboard once again after the opening round of play.

Lee6 of South Korea, who had an impressive nine birdies and an eagle, was tied with Thailand's Pornanong Phatlum, whose first-round showing featured seven birdies and an eagle. Right behind them are Lexi Thompson, Muni He and Kristen Gillman, all with 64s.

Relaxed and experiencing no bouts of nervousness, Lee6 said she was satisfied with her round. Lee6's short game was on and she was in command as she navigated the Bay Course at the Seaview Resort during her afternoon round.

"I try to remind myself to just make my shots, to think about the rhythyms and everything and just to be consistent with all my shots and my short game," said the 23-year-old Lee6. "That's what I've been focusing on and that's why I feel more confident. Then I focus more on the putting, the green speed."

The Korean community came out in support of Lee6 and she was grateful for their presence as well as the other fans.

"I feel pretty happy that so many people are watching me," she said. "It feels pretty weird sometimes because I won the U.S. Open... I feel pretty good about it."

She mentioned that the ShopRite Classic, a three-day event, allowed her to get more rest and she was appreciative of that. The U.S. Open was played over four days in Charleston, S.C. and it was marked by a lightning strike, storms and intense heat. It was much more comfortable on the Seaview layout. It was a bit windy during Lee6's round but she was aware of that after practicing here.

"I've been balancing myself to be physically and mentally stable," Lee6 said. "I've been working on that. The weather was better than last week's weather."

Phatlum, 29, produced seven birdies and she, too, was successful with her putter. She ended her round with a 12-foot eagle putt.

"I think I put no pressure on myself," Phatlum said of the eagle putt. "It was almost a straight putt. It was relaxed for me and I just made it."

Last week, Phatlum was 16th at the U.S. Open and that she feels is carrying over.

"I feel like I got more confident," she said. "I try to play my game and not put pressure on myself. It makes me more relaxed and I have more good results."

At the Open, Thompson tied for second. She played a steady round on Friday, penciling in seven birdies.

"This is a very gettable golf course," Thompson said. "A lot of birdies out there, I think, because it is playing a bit shorter. The defense on this golf course is basically the wind. If it gets blowing out there, it plays a bit harder. A lot of wedges into the greens so a lot of birdie opportunities."

Marina Alex, a native of Wayne, N.J., struggled and had a double bogey and two bogeys to go along with five birdies. She fired a 1-under 70. Annie Park, last year's champion, posted a 69.