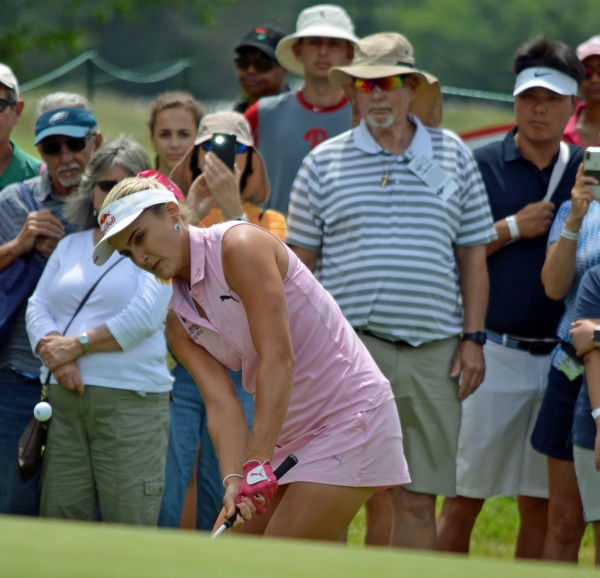 Photos by Maryann Harlow Lexi Thompson chips onto the 14th green after her approach shot hit a sprinklerhead during second-round play at the ShopRite Classic.
Rate this item
(7 votes)
Tweet

GALLOWAY _ Mariah Stackhouse didn't engage in deep thought about what a win at the ShopRite LPGA Classic would mean.

Rather than dreaming about the possibility of being the first African American woman to win a title on the tour, Stackhouse only had visions of putts traveling the green and dropping consistently.

Stackhouse had another solid round on Saturday, June 8, shooting a 67 for a two-day total of 133, a mere two strokes behind Jeongeun Lee6 (63-69-132). In a three-way tie for third place behind Lee6 and Stackhouse with 134 were Ally McDonald, Lexi Thompson and Nanna Koerstz Madsen.

New Jersey native Marina Alex, who grew up in Wayne, shot a 66 and had a 136. Annie Park, the defending champion, whose win at the 2018 ShopRite Classic was the first of her career, did not make the cut. Park had a two-day score of 143.

What made Stackhouse so zoned in on her putting? A year ago, also at the ShopRite Classic, she was paired with Annie Park for the final round, which was held on the Bay Course at the Seaview Hotel and Golf Club. She witnessed Park drain putts at a dizzying pace en route to the championship.

"I was in a group with Annie last year for the final round," Stackhouse said. "I think we were the second-to-last or third-to-last group and I watched Annie drain putts from all over that green. So that's what I'm seeing out here this week is I'm putting the best that I've putted all year. It's because I'm just seeing Annie dropping them from everywhere last year. That's good. That's my last memory of this golf course. So it's a good thing to come in with it the back of your mind."

Stackhouse's putting, obviously, was foremost in her mind. She skirted around the prospect of making history.

"I would only really think about that after the tournament is up," Stackhouse said. "Every single shot, that’s all I’m concerned with. Getting that number right, putting the right club in my hand and executing a solid shot. So there’s just no time for your mind to wander to any other things until the round is up."

A graduate of Stanford University, Stackhouse enjoys the layout of the Bay Course and has found success on it.

"I think that I am fairly accurate off the tee," Stackhouse said. "I think being in the fairway out here is helpful because you have some longer holes where you can come in with some longer irons and hybrids into the wind and, when you're doing that, it's much easier to come into those greens out of the fairway. I think that's the key out here is if you're hitting it well off the tee, the trouble is minimal. But if you're in the rough a little bit and you find yourself in some of that fescue, the up and downs are easy.

"Take a look at these greens. The beauty of them is that they are small, which makes putting fun. The other side of that is that if you miss, you probably are off on the side and have somewhat of a tricky shot, unless you have a lot of green to work with. I think it's a lot of fun to navigate this golf course and, with the experience that I got out here last year, I kind of knew what needed to be done on what holes."

Stackhouse noted that the par 5s "give you opportunities" and, just like on the men's tour, players can go for the par 5s with irons.

Lee6, the 2019 U.S. Women's Open champion, concluded her round on Saturday with a birdie and an eagle. A bogey on the 15th hole served as motivation. The birdie came on the 17th hole, a 119-yard, par-3. She left herself 17 feet from the pin with an accurate tee shot then dropped the putt. On No. 18, a 507-yard par 5, Lee6 holed a four-foot putt for the eagle. She used a 6-iron for her approach shot from 185 yards and was aided by a back wind.

"I kind of wanted to make a birdie as much as I can and so, after Hole 15, I just wanted to finish strong," said Lee6, who would be only the fifth female golfer to claim the U.S. Open crown and the tourney immediately following it if she triumphs tomorrow. "Especially on Hole 16, I made a par. On Hole 17, I made a birdie. Hole 18, I made an eagle. I kind of wanted to finish strong and I did. I'm pretty satisfied with it."