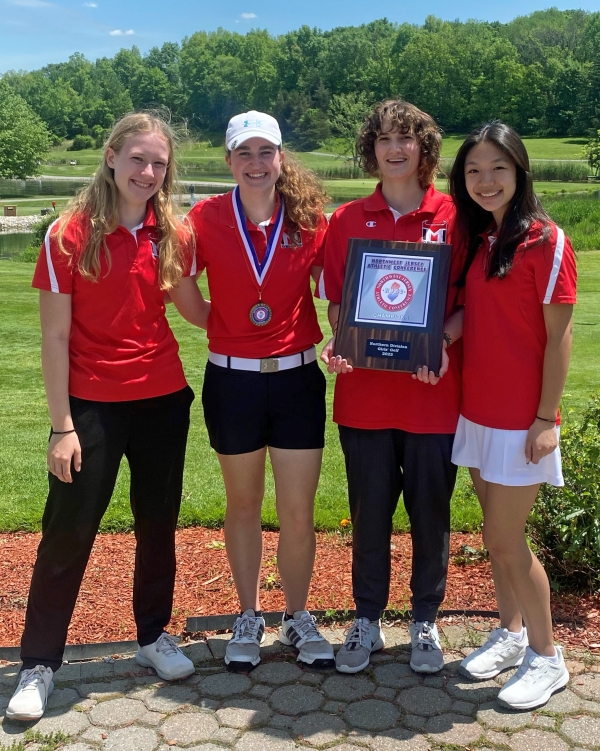 LAFAYETTE _ Every day on the golf course isn't perfect but this one came very close.

Morris Tech's Sammie Dolce was pleased with nearly everything - her score and mindset, the conditions - and emerged as champion for the second time in 23 days, earning top honors at the Northwest Jersey Athletic Conference Girls Golf Tournament at Farmstead Golf Club on Wednesday, May 25.

"I played pretty solid golf all around," said Dolce, who shot an even-par 34 on the Valley Course. "I had fun. It was a beautiful day for golf. It wasn't cold or windy. I stayed in my mindset and played my game."

Dolce's game, which is super steady, enabled her to edge out Morris Catholic's Mary Korab, whom she has known since elementary school. Korab and her Crusaders teammates had something to smile about as they claimed the NJAC team title.

There were many exceptional moments for Dolce, including a birdie on No. 7, a par 5. She opened that hole with a drive down the middle. Her next shot, with a hybrid, went over the green but she recovered with a chip to three feet before dropping the putt.

She didn't get down after bogeying the previous hole. On the sixth hole, Dolce needed an extra putt. Her first putt was from the fringe and was short of the hole by seven feet. In spite of that, the day was a success aided by the day's weather - sunny and 74 degrees

At the Morris County Tournament, held on April 28, Dolce and the other competitors had to contend with 49-degree temperatures and 16 mph winds. Dolce, who repeated as MCT champion, had to bundle up for that tournament, wearing a shirt with long sleeves, a sleeveless vest, pants and a woolen hat over a baseball cap.

"I play to the conditions," Dolce said. "I try to figure things out every day. Today, I hit down the middle and got close. There were a few errant irons. I saved a few pars out there which was nice."

Dolce was thrilled for Izzy Maher, a senior playing her last match for Morris Tech. She listened to Mahre tell of her four years of playing high school golf and how much she enjoyed it.

Korab had a solid outing even though her round began with three bogeys. She recovered and carded birdies and pars the rest of the way.

Among Korab's highlights were birdies on the fourth and ninth holes. On the fourth hole, a lengthy par 5, she capped her birdie with a long putt. The ninth hole featured a shot to six feet from the pin and another excellent putt.

"Overall, I was really happy with my irons and my short game, especially my putting," Korab said. "I enjoyed talking to the girls I played with. We had beautiful weather and it was a lot of fun to be out on the course. It was super exciting to place second but I was also really happy for my whole team that we came in first today."