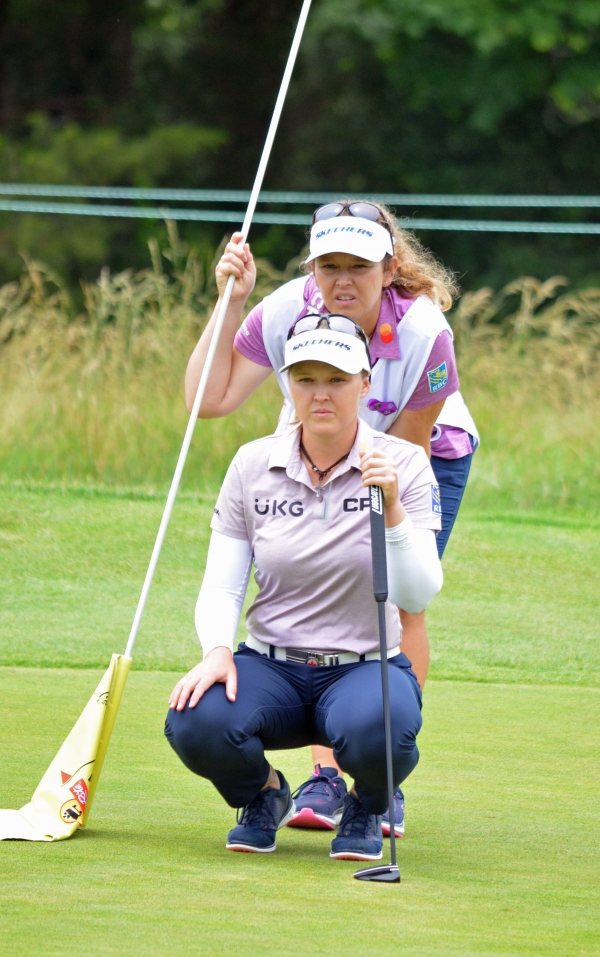 Photos by Maryann Harlow Brooke Henderson, front, and her sister, Brittany, assess a putt during the final round of the ShopRite LPGA Classic on Sunday, June 12.
Rate this item
(5 votes)
Tweet

Henderson, of Smiths Falls, Ontario, still takes her advice to heart and values her input on the golf course - and off of it - even after seven years and an abundance of trips around the United States and all over the world.

The sisters have been successful working together and, on Sunday, June 12, they collaborated their way to the top of the leaderboard at the LPGA ShopRite Classic which was held on the Bay Course at the Seaview Hotel and Golf Club. Brooke, six and a half years younger than Brittany, fired a final-round 64 for a three-day total of 201 and prevailed in a playoff versus Lindsey Weaver-Wright by getting an eagle in a replay of the 18th hole.

After finishing second last year, Brooke Henderson, just 24 years old, was "trying to go low and see what happens." She did just that, coming up with the 64 in a round that featured an eagle, five biridies and 12 pars.

"I thought the victory was a possibility but there are a lot of really talented players ahead of me," Brooke Henderson, four shots back at the start of the third round, said at the post-tournament press conference. "I knew it was going to take a little bit of magic. I’m just really happy that I’m sitting here next to the trophy.”

And to have her sister, who played her college golf at Coastal Carolina, taking every step with her made it even better. The magic she hoped for was contained in two par-5 holes on Sunday - the ninth during 18-hole play and the 507-yard 18th in the playoff. After a monstrous, solid drive off the tee, she used a 7-wood from 193 yards and her shot landed 10 feet from the hole. That trusty club also came through for her on No. 9, which measures 477 yards.

Brittany's take on the second shot that led to the decisive eagle was one of awe.

"I told her 'Wow, that's an amazing shot,'" Brittany said. "I can't describe how good it was. The pin was on the left and the wind was blowing left to right. Brooke hit a draw to counteract the wind and kept it on line."

After witnessing Brooke's golf up close all year, Brittany felt the time might be prime for her sister's 11th victory on the LPGA Tour. The last time Brooke won was at the Hugel-Air Premia-LA Open in April of 2021.

"She's striking the ball so well lately," Brittany said. "Her driver has been great. Her irons are good. Brooke has been trending in the right direction. She stepped it up a notch and made the putts."

Brooke, whose fine showing was worth $262,500, continues to be grateful that Brittany, a former member of the Canadian Junior Team, carries her bag.

"She's amazing," Brooke said. "She works so hard and does pretty much everything for me, which is really great. Out there, we get along so well on and off the course so we're able to work through adversity when it comes up. I think trust is a big thing... Just knowing she's always there for me and she's going to try her very hardest whether we're just trying to make the cut or in the final group on Sunday or making a climb like today... Hopefully, she sticks around a litle longer."

England's Jodi Ewart Shadoff also carded an eagle on No. 18 and was 11-under, enabling her to finish second. Lydia Ko and Albane Valenzuela came in fourth at 10-under. Brittany Lincicome, pregnant with her second child, shared sixth place with New Jersey native Marina Alex and Nasa Hataoka.