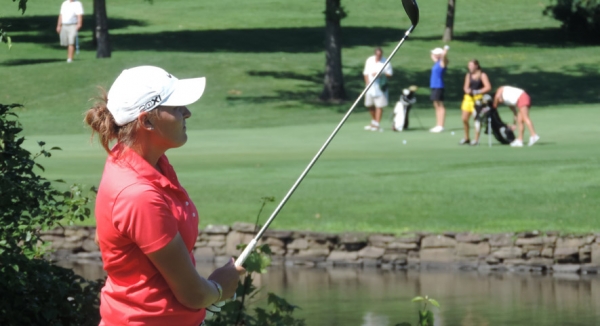 Photo of Taryn Anderson by Mike Moretti of the NJSGA. Additional photos by Sandy Seegers. Joy Passalacqua was a semifinalist in the second flight at the NJSGA Women's Amateur Championship held at Brooklake Country Club.
Rate this item
(1 Vote)
Tweet

FLORHAM PARK _ Wendy Ferrara not only bears the weight of Taryn Anderson's golf bag as a caddy, she knows - and has witnessed - the progression of her game from the beginning.

Ferrara and the 19-year-old Anderson, a Branchville resident, traversed the the course at Brooklake Country Club for three days this week while Anderson competed in the 88th New Jersey State Golf Association Women's Amateur Championship.

Anderson had her moments - good and bad - in the tournament, her third this summer and only her fifth since taking up golf. Ferrara continued to be impressed with Anderson, whose run ended with a 2-and-1 loss to Kelsey Solan of Burlington Country Club in a first flight match play quarterfinal on Wednesday, July 31.

"Taryn did well. She's worked really hard," said Ferrara, a member of the teaching staff at Black Oak Golf Course. "She's still new to the game. Golf is a game of maturity."

According to Ferrara, Anderson "didn't have a golf game" when she began giving her lessons four years ago. Anderson's father, Steve, asked Ferrara to assess his daughter's abilities to see if she had potential.

Prior to swinging clubs, Anderson swung bats, and was a talented softball player at High Point High School. A 6-foot catcher, Anderson received several offers to play at Division I colleges. Her heart was set on golf, though, and she switched to it her senior year, leaving behind the sport she had played since childhood.

"I didn't like softball anymore," Anderson said. "It wasn't fun. I was just going to play. I grew up playing golf with my dad. I went out golfing with friends during softball season. Then my dad found Wendy."

Anderson, also a basketball player, shot a nine-hole score of 35 in her first high school match when the Wildcats went up against Pope John at Black Bear. Her game remained consistent and she qualified for the state tournament. Anderson pursued golf in college and was a redshirt freshman at William Carey University.

"I always liked the intensity of softball but there's not a better feeling than making a birdie or another good shot," Anderson said. "Golf is quiet. It's nice. It's good alone time."

In two rounds of stroke play at the amateur championship, Anderson fired an 86-87-173 to tie for 15th. She got off to a quick start in match play, going 1-up on the first hole with a 25-foot birdie putt.

After two holes, Anderson, who hits the ball 250 yards off the tee and considers her long irons "money," was 2-up. At the turn, Solan was 1-up. On the 11th hole, Anderson missed a 10-foot birdie putt. However, she drew even on the 12th hole and, on the 13th, she made another birdie putt to regain the lead.

However, bogeys on Nos. 14 and 15 hurt Anderson. On the 15th hole, she opted for a knockdown and the ball deaccelerated and wound up in the left greenside bunker. She was unable to get up and down on 17.

"I'm really pleased with how I played," Anderson said. "I was able to perform under pressure and make putts when I needed to."

"Taryn is a fabulous athlete," Ferrara said. "Her athleticism and competitive edge are good for the game. Taryn has great strength and good hands. She managed to grind out her freshman year in college even though she was unable to compete."

Parsippany's Christine Kim and Montville's Joy Passalacqua also took part in the amateur championship, advancing to the match play portion of the event.

Claire Serruto of Montclair Golf Club defeated Kim, 1-up, in a quarterfinal. Passalacqua, competing in the second flight, recorded a 3 and 1 victory over Samantha Perrotta of Gambler Ridge in the quarterfinals before being ousted 2 and 1 by Madison Beer of Cherry Valley in the semifinals.

The 20-year-old Kim engaged in a tight match with Serruto. Kim won the 16th hole, a 126-yard par 3, to square the match. On the 17th, another par 3, Kim sent her tee shot into the water, noting that "the wind might have taken it." Serrutto took that hole. The two golfers parred the 18th.

"It was close the whole way," Kim said. "We both had bad shots. We both had good shots. It was like 'Who is going to mishit?' It was so serious."

Kim, who loves match play because "you can go for shots," said her putting was off on Wednesday. After mastering the greens in stroke play, she had a number of three putts.

"This course gets to me," Kim said. "I've played it three times and I can't beat it."

The NJSGA Amateur was Kim's last tournament this summer. She plans to play in South Carolina before beginning school at Kean University. The college does not have a golf team so Kim plans to continue to play amateur events and dreams of qualifying for the U.S. Open one day.

Passalacqua, a retired educator, has been on a roll of late. A little more than two weeks ago, she teamed with Lisa Lifer of Panther Valley to claim the NJSGA Women's Four-Ball Championship at Jasna Polana.

Versus Perrotta, the reigning NJSGA Women's Amateur Public Links champion, Passalacqua was 6-up on the front nine. Perrotta, however, righted herself and got back in the match. Passalacqua remained steady and fended off the late charge.

Passalacqua was involved in tournament tennis for three decades before taking up golf six years ago. Aching knees prompted the change. Since then, Passalacqua, under the tutelage of Tom Delaney at Basking Ridge Country Club, has dropped her handicap from 18 to 5.4.