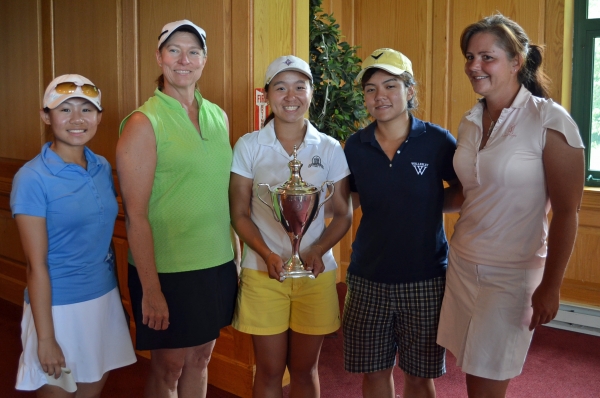 PARSIPPANY _ A bogey on the 17th hole, the result of a missed putt, irked Alice Chen.

Chen was in a tight battle with Noelle Maertz and the bogey, only one of two in her ultra steady round at the Knoll West Country Club on Tuesday, July 1, left her one stroke behind Maertz, the 2012 NJSGA Women's Public Links Champion.

The 18-year-old Chen, a recent graduate of Montgomery High School, quickly righted herself, sinking a 40-foot putt for birdie. Maertz, meanwhile, failed to make a four-foot putt and had to settle for par. The dramatic ending left both players with 70s and a playoff ensued.

Chen wound up with her first NJSGA Public Links title after one extra hole, combining a solid tee and approach shot with two putts while Maertz, soon to be a senior at Wagner University, recovered well from an errant tee shot and got out of a bunker but left her second putt, from five feet, slightly short.

"This is definitely exciting," said Chen, who claimed her second NJSIAA Tournament of Champions crown in the spring. "I wasn't very good on the back but I tried to be strong. I was up throughout most of the round. Noelle played great.

"We know each other and are very friendly. It was good, healthy competition."

In the third flight, Soo Kyong Li of Green Knoll prevailed with a gross score of 88 while Karen Stepsus of the Northern New Jersey EWGA had a 68 for the top net score.

Christine Kim, playing on the course she competed on as a member of the Parsippany Hills High School squad, fired an 81 and tied for eighth overall. Riverdale resident Jane Kuhfuss shot a 39-43-82 and was second gross to Kelley in the second flight.

Chen did not get rattled despite bogeying the 17th hole, a par 3. Her father, Sean, caddied for her and knew the bogey upset her yet hoped she'd be able to right herself.

"I didn't say anything to Alice after the bogey," Sean Chen said. "I knew she was in pain, though. I could feel it."

Holing the 40-foot putt, which traveled left to right before dropping into the cup, was the highlight of Chen's exceptional round. She played the 5,338-yard Knoll West course once before, getting in a practice round two weeks ago.

"My ballstriking, my approach shots were good today," Chen said. "My putting was steady."

Chen, unable to compete in past years because of conflicts, rode the momentum of the lengthy putt into the playoff. Chen sent her drive 210 yards down the middle of the fairway. Maertz's tee shot landed in the right rough, near a tree.

For her approach shot, Chen was accurate again, putting the ball on the green 12 feet from the pin. Maertz's second playoff shot found the sand trap on the right of the green. Chen did not make her birdie putt yet was close, leaving it inches away on the right side. Maertz hit her bunker shot within four feet. Her putt, too, just missed. Chen parred the hole while Maertz bogeyed it.

The championship is one of many for Chen, dominant on the high school level. Chen took top honors in Group IV and garnered the Somerset County Tournament at Neshanic Valley, where she began golfing at the age of 7. In 2013, she finished atop the fields at the NJSGA's Women's Amateur and Junior Girls tourneys.

She was not very happy with her showing at the recent AJGA Rolex Tournament of Champions in Nashville, Tenn. Chen had a four-day total of 299 and tied for 26th.

Right now, Chen is focused on college. Undecided on a major, she intends to "get a taste of everything" before choosing. The LPGA, she said. is a possibility.

"It all depends on how I progress," she said. "There are many factors involved. If the opportunity is there... I have to see what happens."

Parsippany's Kim, a student at Kean University, was "kind of disappointed" after a quick start. Kim had a rough front nine, carding four double bogeys. Things turned bad, according to Kim, when she doubled the par-5 fifth hole.

"My drive didn't go very far," said Kim, whose tee shots are typically around 265 yards. "On the sixth and seven holes, I had double bogeys, too. I tried to forget the first one but I couldn't get it out of my head."

Kuhfuss reveled in the eagle she got on the par-4, 330-yard eighth hole using a 5 hybrid. She launched her eagle-producing shot from 130 yards out.

The eagle was her second. Kuhfuss got the other on the course at West Point, N.Y.

"I played pretty well," she said. "My short game was good. I made a few putting mistakes. The par 3s got me. I bogeyed on 17. It took me two tries to get out of the trap."

Use the following link for complete results: http://ghintpp.com/njsga/TPPOnlineScoring/ResultsStroke.aspx?id=204