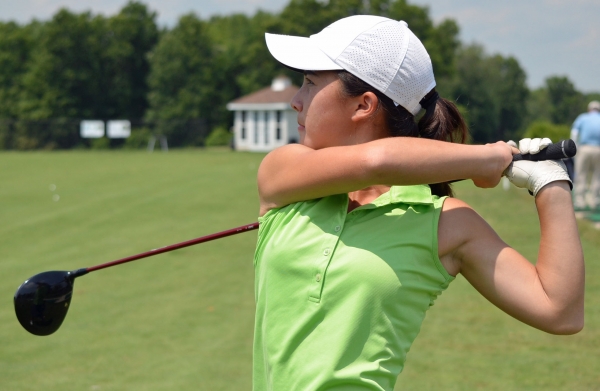 HILLSBOROUGH _ Christina Parsells didn't think about Alice Chen's recent dominance of girls and women's golf in New Jersey when she was paired with her for the second and final round of the NJSGA Junior Girls Championship.

Parsells, of Bernardsville, certainly was aware of Chen's accomplishments yet kept them out of her head, telling herself "to take it one shot at a time and hit the fairways, hit the greens, make the putts."

Three behind Chen after one round, Parsells fired a 33 over the front nine on Royce Brook's West Course and went on to register an upset over the two-time defending champion by carding a 69 and claiming the title on Thursday, July 10.

"I was fine playing with (Chen). I had never been grouped with her so it was exciting," Parsells said. "I wasn't expecting to win this. I think everyone thought Alice would. It just shows that anything can happen."

Kelly Sim, out of River Vale Country Club, was third with a 76-69-145. Jessica Barry of Chatham and Madison's Carley Hopton, the Morris County Tournament champion, had two-day totals of 161 and ended in a three-way tie for 14th.

The 16-year-old Parsells (74-69-143) edged out Chen (71-73-144). She began to take charge on the first hole of the second round. Parsells birdied the 315-yard hole by landing her approach shot 10 feet from the cup and sinking the putt. Chen, a resident of nearby Montgomery, bogeyed it.

Parsells, whose previous best 18-hole score was a 71 attained at Fiddler's Elbow in the NJPGA Championship, had an excellent front nine, making three of her seven birdies. The last nine featured four birdies but she had four bogeys.

Only once did Parsells, a student at The Peck School in Morristown before going on to Kent Place where she will be a senior this fall, feel a little bit uneasy. The jitters struck her on the 18th hole, a par-5, when she feared a playoff.

Parsells hit her tee shot into a fairway bunker while Chen, slated to play in the Women's Public Links Championship in Washington from July 14-19, ripped hers down the middle. Parsells got out but the ball traveled 50 yards. Chen put herself in great position for a birdie, landing her second shot to the right of the green. Parsells wound up in the sand again after hitting her third shot.

Chen chipped the ball for her third shot but it went 11 feet beyond the hole. Again, Parsells escaped the bunker, setting up an 11-foot putt. Parsells and Chen both failed to make their putts. At the conclusion of the hole, Chen had a par while Parsells' bogey enabled her to hold on for the victory.

"I got nervous on that hole," said Parsells, the women's champion at her home club, Baltusrol. "Alice is so good. She almost made the birdie putt. Then there would have been a playoff. I knew I had to two putt to win."

Although Parsells' golf resume isn't quite as accomplished as Chen's, it is rapidly growing. Parsells won an IJGT Junior Tournament in the fall of 2012 at Crystal Springs. In Scotland, on the famed St. Andrews course, she captured the American High School Championship last week.

Golf is the only sport Parsells currently plays. She gave up field hockey after eighth grade because she had tendonitis in both knees.

Nine days ago, Chen won the NJSGA Women's Public Links Championship at the Knoll West in Parsippany. She took back-to-back NJSIAA Tournament of Champions crowns. Last summer, she topped the field in the NJSGA Junior Girls and Women's Amateur tournaments.

Barry, whose first-round score of 80 matched her career best, continues to improve. Her second round featured birdies on the 11th and 15th holes.

"I'm satisfied with how I did. This is the best tournament I've had," Barry said. "I still could've taken off three strokes of each round."

She was most pleased with how she got herself back into play if she was left or right. Barry, whose father, Sean, boasts a single-digit handicap, said she was "really focused."

The birdie on the 15th hole, a 352-yard par 4, was the highlight of Barry's round. After hitting what she termed "a bad drive," Barry used a hybrid to hit a 185-yard shot off the side of a hill, landing the ball on the right fringe. She then dropped a 45-foot putt.

Barry, a forward on the Chatham High School field hockey team, will compete in the WMGA's Maureen Orcutt Trophy Tournament today, July 11. She enjoys both sports and is open to playing either one in college.

"I'm into golf right now because it's summer," she said.

Ami Gianchandani of Short Hills was tied for third after shooting a 74 on Wednesday. She penciled in an 80 in the second round and finished tied for ninth.

"My putting wasn't very good today," said the 14-year-old Gianchandani. "A lot of them were lipping out."

One of the putts lipped out on the 16th hole, depriving her of an eagle.

Gianchandani, soon to be a freshman at Pingry, became interested in golf through her father, Alkesh, and grandfather, William Rauscher. She previously played softball, tennis and soccer. She continues to play squash.

View the embedded image gallery online at:
https://soar-nj.com/sports/golf/item/896-parsells#sigProIdb695cf1f99
More in this category: « PJ's Tarnopoll rises to the top Lopez impresses at LL4G event »