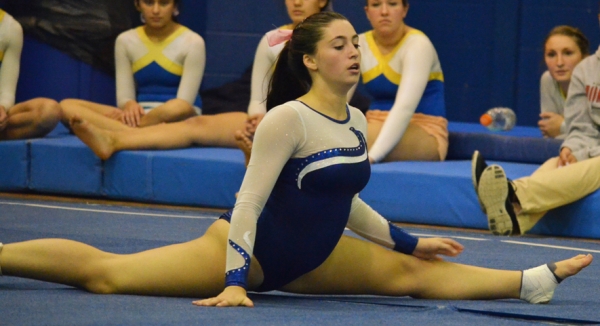 BUTLER _ There were no trophies, no plaques and no fanfare, just two gymnastics teams with proud histories wanting to do their best.

The Randolph and Butler coaches joked that the meet held on Wednesday, Oct. 9 was their Morris County Tournament, an event that faded away two-plus decades ago.

Randolph, heavy with underclassmen, would have to go after the "title" without reliable junior standout Carly Weinstein, at home recovering from the flu.

Senior Millie Potter, along with three sophomores and three freshmen prevailed, 78.47-74.57, in the clash between the county's two remaining squads.

"I'm really happy with the rest of the girls," said Potter, whose score in floor exercise was an impressive 8.5 "I liked how they competed and handled themselves."

Coming out ahead of Butler was important because the Rams learned what the younger girls were capable of.

A pair of ninth graders, Alex Yutsus and Asada Taylor, did well considering they hadn't competed in meets until this year. Caitlyn Sebastian, a sophomore, was the anchor on the floor and beam. Sophomore Mersaydez Duval took part in three events for the first time.

"The girls have talent," Rams coach Sue Falleni said. "They just don't have the skills yet."

Potter took part in balance beam, vault and floor exercise. On the vault, Potter executed a half on, half off. She did a half-on twist onto the table and a half turn off.

"It was a little neater than usual," Potter said. "On vault, I need to stick my landing, be patient and go in tight."

Randolph (3-1) came out on top despite getting lower-than-normal scores in floor exercise. The scores were slightly lower due to the fact that the Rams were doing their routines on matting rather than a spring floor.

The host Bulldogs dedicated their last two meets to head coach Carrie Simoneau, who gave birth to her second child, a son, Jake, on Tuesday, Oct. 8.

"The girls were alive and energized," Butler assistant coach Rebecca Baskinger said. "It was nice."

On Tuesday versus Wayne Hills, the Bulldogs scored a season-high 77.25 points.

"With our coach out, we pushed ourselves," said senior Amy Iannarella, an all-around performer.

Iannarella's routine on the uneven bars "was really clean." She said that there have been instances when it's been "iffy." In floor exercise, Iannarella did a difficult move - a punch front, which is a front flip with on hands.

Junior Melissa Mattson was best all-around with a score of 30.42, including an 8.0 on floor.

"We're excited about the baby," Mattson said. "We see our coach's 4-year-old daughter, Rylee, a lot because she practices and performs."

Senior Chloe Bogert, in her first year on the team, moved closer to earning a varsity letter by competing in floor exercise. To get a letter, Bogert, who had her own cheering section, must compete in three meets. The Randolph one was her second.

Tatiana Hold, a sophomore, turned in a solid all-around effort. Hold, who previously did floor and beam, has been learning vault and bars.

For many years, Butler was the site of the MCT, drawing 12 to 14 teams. Now, only the Bulldogs and Randolph compete in gymnastics.