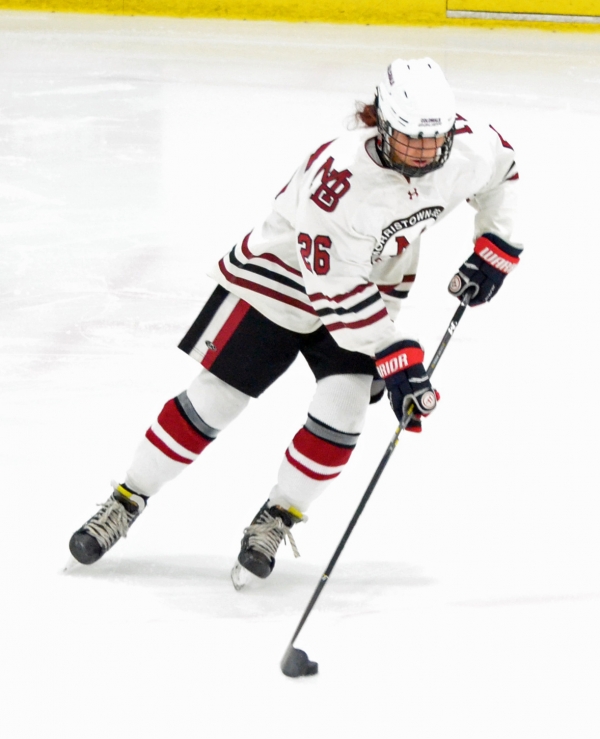 NEWARK _ Color the rink at The Rock a bright shade of red, almost purple. Crimson would describe it quite nicely.

Morristown-Beard played a basically flawless defensive game and the surging Crimson went on to record a 3-0 victory over Summit in the first girls New Jersey high school ice hockey state championship game on Thursday, March 5 at the Prudential Center.

Sophomore Leah Stecker made it 1-0 in the first period for top-seeded Morristown-Beard (18-8-1) as she lifted her 14th goal into the upper right-hand corner of the net.
Logan Sutera, a sophomore forward, scored two of the three Morristown-Beard goals to spark the Crimson's offensive attack.

Midway through the second period, Sutera improved upon a one-goal lead for Morristown-Beard off an assist from senior Anna Bajak to give the Crimson a 2-0 edge.

Later in the second period, Sutera (10 assists, nine goals this season) blasted a point-blank slap shot into the upper left-hand side of the net off an assist from freshman Lilli Warnock to spark the Morris County prep school to a 3-0 advantage heading into the final 15 minutes.

Senior Sasha Berniker, a rock all season long for the Crimson in goal, made 11 saves to earn the shutout.

Ranked as the No. 1 team in the state by the Star-Ledger, Morristown-Beard won its last three games and four of its last five and did not lose a game to a New Jersey school.

"Our senior leadership all year long has been excellent," said Morristown-Beard coach Bruce Driver, who earned his 303rd career win. "They all did another solid job tonight along with all our underclassmen, too."

"We only had a few players when we first began and now we have come a long way," Driver said. "I couldn't be more proud of what we accomplished tonight and over the program's history."

Playing well in goal for Summit was senior Lily Spinner, who had helped to carry the Hilltoppers (15-7-2) from Union County all the way to the state final. In the state semifinals, Spinner had  39 saves to lead Summit past Trinity Hall of Tinton Falls, 7-6, in an exciting five-round shootout, believed to be the first of its kind in New Jersey state girls ice hockey history.

On Thursday, Spinner made 25 saves, several of an acrobatic variety, to keep the sixth-seeded Hilltoppers in the game battling a strong and constant Crimson attack that had many forays into the offensive zone.

Morristown-Beard won its fourth straight prep state championship on Feb. 11, defeating Pingry, 4-3, in overtime. The Crimson defeated Oak Knoll, 6-2, on Monday, the same day as the Summit win over Trinity Hall, in the state semifinals to set up the state final pairing.

Driver, who spent 15 years in the NHL, mostly with the New Jersey Devils as a standout defenseman, won a Stanley Cup with the NHL's New Jersey representative in 1995 near the end of his career.

That 1995 Stanley Cup championship was the first in history for the franchise that began in Kansas City known as the Scouts for the 1974-1975 season and lasted two years in Missouri before moving to Colorado for the 1976-1977 NHL campaign where they were known as the Rockies for six seasons until their last season in Denver in 1981-1982.