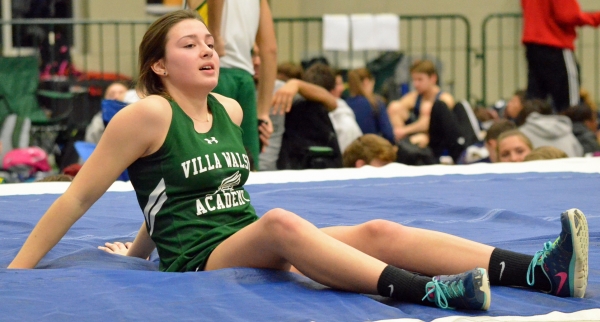 MADISON _ The good-natured banter between the Benz sisters has gone on for the last year or so.

Julia, a freshman at Villa Walsh, dreams of the day when she'll clear 11 feet, 6 inches in the pole vault. That height represents her sister Monica's personal record.

"Monica is definitely not excited for the day I break her record," said Julia of Monica, now a freshman at Penn. "That's what I want to do."

One of six children in the Benz family, Julia, first in the pole vault at the Valentine Invitational on Wednesday, Jan. 13 with a vault of 9 feet, seems driven to improve.

Apparently, Julia, whose PR of 9-6 was established at a Heights Unlimited meet last November, has the same zeal for the pole vault as Monica and her brother, Michael, a Delbarton graduate and sophomore at Penn. She remembers going to Drew University when they competed. She recalls Michael going over the bar when it was set at 15 feet.

Julia started out as a gymnast but dropped that sport in third grade. She moved on to competitive cheerleading, which she was involved in for four years. It's no surprise she was interested in the pole vault. Julia also is an outside hitter for the Vikings volleyball team.

"I like that it's you against the bar," said Julia. "You do your own thing. You get yourself mentally ready. My brother and sister had a lot of influence on me. I saw them and said 'I want to do that.' It's so challenging."

According to Julia, as a pole vaulter, there's "always something to fix." At the Valentine Invitational, she was hard at work on her plant.

"I plant late," Julia said. "I want to be on time. There's a lot of muscle memory. I just need to be in the habit of planting on time."

Whatever the problem, Monica and Michael are willing to help.

"They're just a phone call away if I have a question or need advice," Julia said.

Hanover Park twins Anna and Katie Lazur took first and second place in the 400-meter dash. Anna, competing in winter track for the first time, crossed the finish line in 1:01.29. Katie, a participant all four years of high school, had a 1:02.28.

"I want to get out in front and keep the lead," said Anna, one of the state's top 400 hurdlers. "I try to not let anyone pass me. I focus on my form."

Anna, fourth in the 55 hurdles, prefers spring track but opted to join the indoor squad in order to improve her times and have a shot at the Meet of Champions. In college, Anna will play soccer. She is headed to Monmouth University, where she is considering a major in sports medicine.

Nora May McSorley of Randolph won the featured race, the 1,000-meter run, in a time of 3:01.85. McSorley's Rams teammate, Elly Scherer, topped the 55 hurdles field with an 8.33, setting a meet record. Whippany Park's Kristen Hall prevailed in the high jump with a jump of 5-2.

More familiar athletes, like Morris Knolls' Tymia Joseph and Whippany Park's Gina Dello Russo, continued to be successful. Joseph claimed gold in the 55-meter dash in 7.42 while Dello Russo prevailed in the 300-meter dash in 42.85.

The 1,600-meter run was won by Montville senior Cassandra Harasts in 5:17.41. Nickolette Dunbar of Whippany Park continued her dominance in the shot put, throwing a meet record 51-0.25.